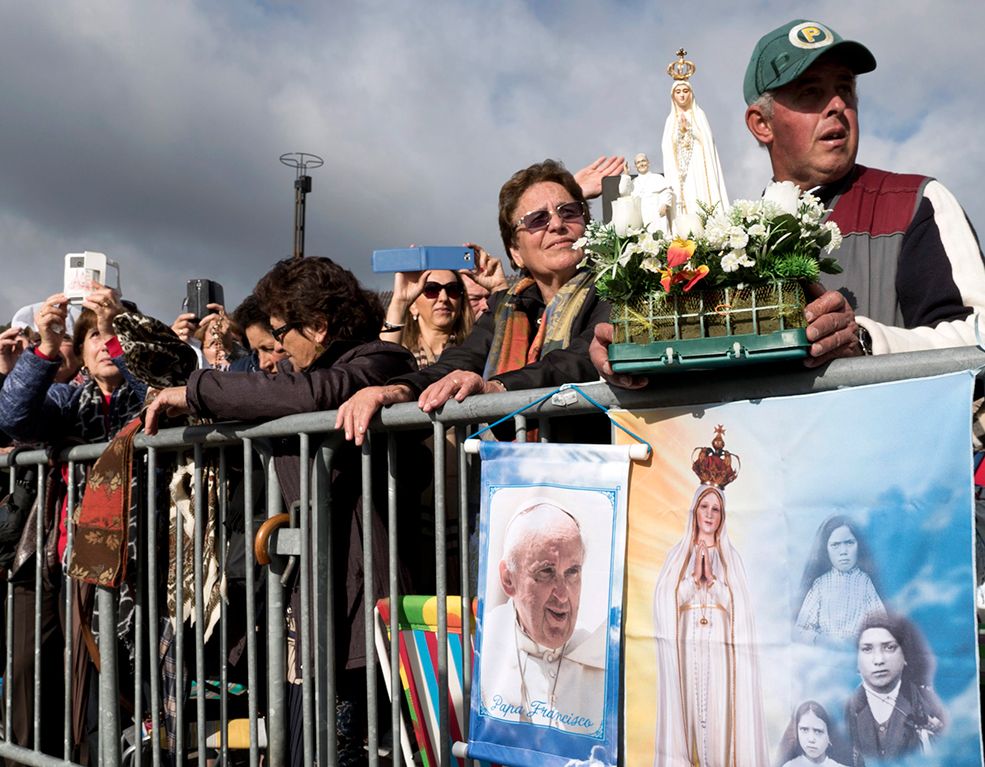 A sheet of paper, handwritten, with a short message, in Portuguese: “You know who I am. There is no need to describe my person...” Another sheet of paper, completely blank. Some of the items were sent by mail to Our Lady of Fatima or delivered to the shrine. What did the person who wrote it desire with this gesture?

Each message carrying its own mystery, these five enigmatic sheets of paper are now collected together with almost eight million other messages of the same kind in the Correio de Nossa Senhora (Our Lady’s Mail)–the name of this section of the archives of the Shrine of Fatima, that holds letters and notes of all kinds addressed to Our Lady–until now practically unknown.

In it, we find requests for health or employment, forbidden and confessed loves, existential anguish, prayers for peace in the world, for the ‘conversion of sinners’ or ‘conversion of Russia,’ even requests for an end to war, for example, in the former Portuguese colonies.

Whatever the origin, human needs are very similar: in Portuguese, Spanish, Italian, English or French, the languages most frequently used, one finds messages asking to overcome “economic difficulties,” to obtain “better living conditions,” a “satisfactory job,” “health for the children,” the “conversion of us, sinners” or of “sinners” in general, good school results, a “nice boyfriend”…Or also for the Pope’s intentions, or the success of the Second Vatican Council.

From various countries, many people ask for peace, among other personal requests. This intention sums up the tone of most of them: one’s own or close relatives’ and friends’ needs intersect with political issues, problems in the family, ways of praying, social needs, faith, and devotion.

Most ask, explicitly or implicitly, to be a better person, a better parent, a better spouse, a better daughter or son–a better Christian. As two other letters, sent by the same person from Colombia, in 1966, express: “We all wish to be better, much better than we are.”

Messages began appearing in Fatima in the 1940s, following a tradition of other pilgrimage sites. More than two decades had passed since the events at Fatima in 1917, when three children–Lúcia dos Santos and her cousins Francisco and Jacinta Marto–said that they saw Our Lady (Francisco and Jacinta were canonized by Pope Francis in 2017).

Philippines In Top Eight
The mail increased in the following decades: in 2017, the centennial year, 237 boxes were filled with about 807,000 records from devotees (10% of the total ever received), many of them Polish because of the Polish Pope John Paul II, who made the pilgrimage to Fatima in 1982, 1990 and 2000.

Depending on the year, in the last two decades, the Philippines is still among the eight countries with the highest number of foreign pilgrims to Fatima. In 2017, the centennial year of the events, 93 organized pilgrimages brought 2,439 Philippine pilgrims (in 2010, there were 55 groups with 1,514 pilgrims, many of them living in foreign countries).

In 2019, Fatima registered 99 Philippine pilgrims with 2,770 pilgrims but in 2021, with the pandemic, there were only four groups with about a hundred pilgrims–all of them living in foreign countries.

One may ask if it is legitimate to keep these messages, which reflect something very intimate, in several cases explicitly expressing the expectation that they will be destroyed. At the Western Wall in Jerusalem, almost all of them are destined to be buried before Pesach, the Jewish Passover, in a cemetery.

In Fatima, there was “hesitation” about what to do with these documents, admits Marco Daniel Duarte, Director of the Department of Studies of the shrine. After some debate with specialists, the decision was taken to study and organize the documents that began in 2014. And, probably, this will be a rare collection worldwide, at least of its kind.

Many messages–especially in English–are just lists of names to be interceded for. Jewish tradition has passed on to Christianity the importance of the name. “The God of Abraham, of Isaac, of Jacob, the God of Moses…” means that, in the Bible, revelation has always been made to concrete people. Christian prayer today retains the idea of naming as a way of making present, remembering, or passing on a testimony. Writing a list of names is, in this case, a more intimate and concrete way of consecrating the loved ones.

In the part of the collection investigated–from 1940 to 1977, the last year that can be consulted, in order to comply with the archives’ rules of access–besides Portugal, the letters hail predominantly from Spain, Italy, Brazil, Ireland, the United States of America, the United Kingdom, and France.

After the 1980s, the number of messages from Poland became overwhelming: some of the years have dozens of boxes with messages from the native country of John Paul II, who helped to internationalize Fatima with his trips to the shrine.

A Confidant And Intimate Friend
From Portugal or Asia, from Ireland or the USA, from Latin America or somewhere in Africa, all the people write to the same confidant and intimate friend, with many and different invocations, but always with a filial tone: mother, dearest mother in heaven, my most holy mother, my good mother, dear mamma…

“The familiarity of Fatima is a revolution,” comments Portuguese theologian, Fr. Bento Domingues, OP. The pilgrims address “the person they talk to, to whom they pray, with whom they are, in whom they have confidence.” He adds: “It’s a revolution. What counts is not religion in its institutions, but rather the journey each person makes. I’m the one in the process of conversion, in the process of walking.”

There are enigmatic letters, asking only–sometimes on several pages–to “solve that problem,” without ever saying what it is, which shows closeness and intimacy. As well as some with short questions: “Mom. When do we begin? Your sinful son. B.”

Or even this one: “Dear S: The days go by. We notice their weight, positive, negative, concrete, abstract, and each one in the face of personal responsibility before himself and the whole wants to live life and fight for his eternity. To how much illusion one is subject to in the realm of spirit and matter, even those that most possess the truth that matters…”

This is a mailbox in which women are the main senders. In the Portuguese case, when the subject is the colonial war that Portugal waged in Angola, Mozambique, and Guinea-Bissau (1961-1974), “it was the women who wrote because they remained [in the mother land]),” comments the bishop and historian Carlos Azevedo, working in the Vatican’s Pontifical Council for Culture.

Messages Sent By Women
Some random samples show that, depending on the years, between 70% and 80% of messages were sent by women. “The feminine is the pole of humanity that is most easily placed in the position of asking, of giving thanks, and of bridging the gap with the divinity. These messages also confirm this”, observes Marco Daniel Duarte.

Many people’s connection to Fatima is based on the dimension of Our Lady as “a maternal figure, the protective mother,” states Portuguese psychiatrist Luísa Gonçalves, serving at the Armed Forces Hospital, in Lisbon, where she treats former combatants with post-traumatic stress. “‘Mother’ is a protective word, the mother is unconditional love. She is someone who says, ‘whatever you do, whatever you go through, however you come, I love you’. And there is a mother in heaven who gives faith to these people and who, no matter what happens, will always love and protect them.”

Speaking of the pilgrim experience at Fatima, Dominican Fr. Bento Domingues comments: “Whoever has never been to the candle procession [one of the most important moments in the Fatima pilgrimages] doesn’t know what the night is, and what light is, and what hope is.”

In the middle of the night, the candlelit procession “lights up” hope. And, at the end of each pilgrimage, the farewell procession with white scarves speaks to people’s departure “to everyday life, to the struggle”. They don’t want to say goodbye. “The longing that there is in the farewell song is a shedding of tears. Why? Because they all have within themselves a farewell: such as death, sickness, all things… And Our Lady is there...”

Why You Should Read Every Day

If you’re one of countless people who don’t make a habit of reading regularly, you might be missing out. Reading has a significant number of benefits, and here are ten of them to get you to start…