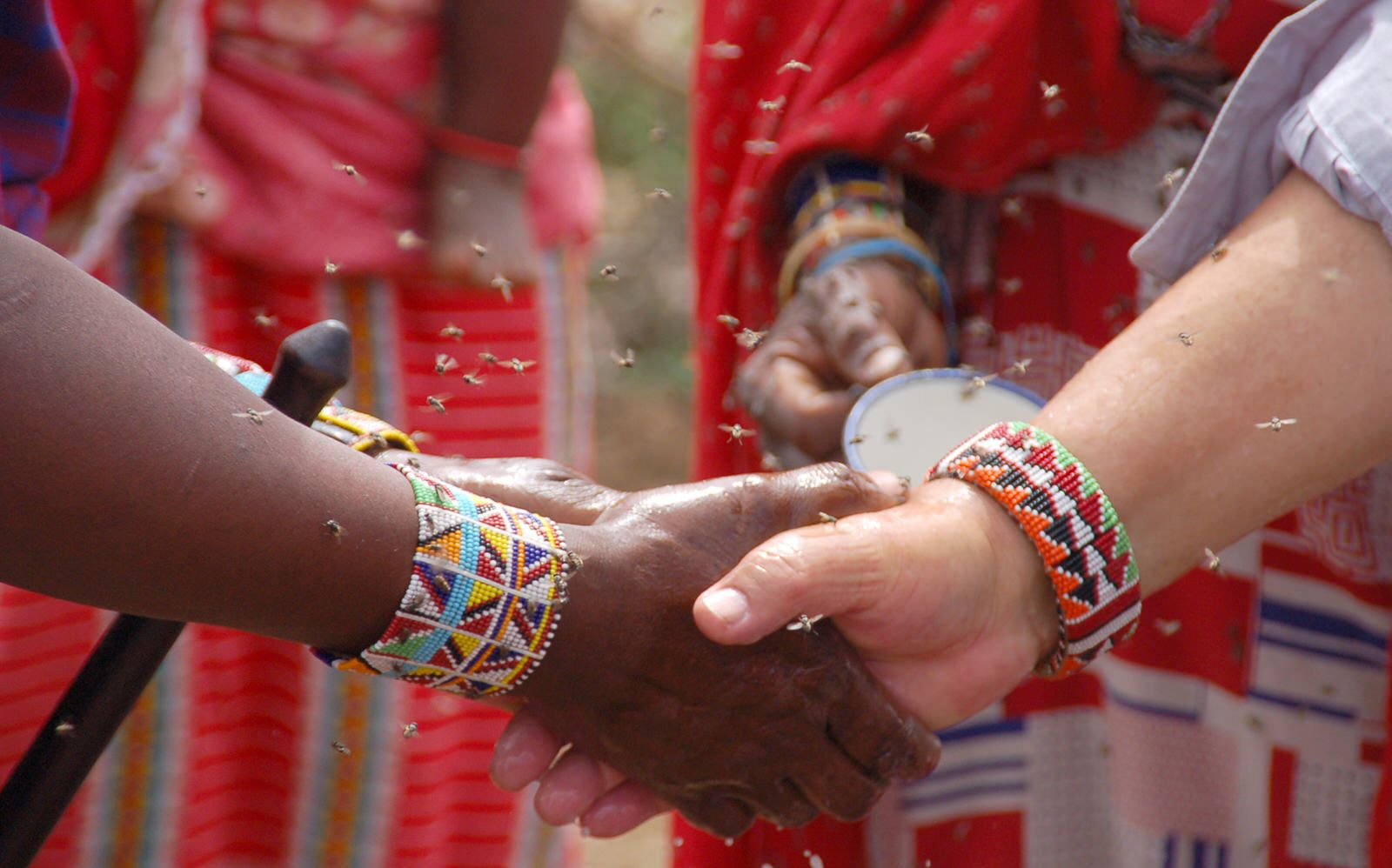 The liturgy is rich in signs and symbols that can help not only in catechesis and devotion but in attracting non-believers to the Catholic faith. It is in this regard that liturgy can be inculturated to include the familiar, (i.e. ethnic actions, symbols, etc.) without diluting the Christian meaning and message that the liturgical action wants to convey.

The sounds of the night were slowly fading away, replaced by occasional sentences murmured in the dusk. The light grew stronger to signal the start of a new day. The group of catechumens, some teenagers, others adults, gathered outside the chapel of En-Kasiti. The ritual started with a song, a low pitched chant in Maa, the language of the Maasai. “Oh,” they sang, “Come, Spirit of God.” I took over as soon as the crowd grew still. I explained why we were there, and why the various steps of Christian initiation were important. I invited all to pray for the candidates of baptism. When the time of blessing the catechumens came, the catechist brought a gourd filled with en-kare pus, milk mixed with water. I took some in my mouth and sprayed it over the candidates, blessing them in the traditional way of the Maasai. I then blessed the whole assembly with the fly-whisk drenched in en-kare pus.

Those actions and words might have sounded strange to a foreigner. But it made perfect sense to the Maasai present at the ritual: the setting at dusk, the dark dresses, the use of water and milk – those were clear signs we were celebrating a ritual of initiation. The use of en-kare pus was a must. Water is a symbol of life, and so is milk, central to the life of a pastoralist community like the Maasai. A blessing cannot be complete without milk. Sprinkling water on people is a blessing. Therefore, candidates to an important step in life are sprayed with it or their feet are washed. In adopting these signs and actions from the local culture, I was signalling the importance of what was happening. Understanding the connection between worship and mission helps one understand both, particularly the meaning of worship in an age of mission.

Later, when they are baptized according to the ritual of the Church, they would have reached that point knowing well that they had gone through the various steps of initiation.

While being a missionary among the Maasai of Kenya, I felt the need to learn about their culture and incorporate their symbols and understanding into the work of evangelization. The Maasai are pastoralist. They place a tremendous importance on their herds and flocks. One of the images they refer to is the olchekut-supat. The olchekut-supat is the shepherd who gives his life to defend the herd. He is the person who shows total love for the community and the animals by sacrificing himself for the others. To explain who Jesus was, it was enough to say “Jesus is the olchekut-supat.” No more words were needed.

During my stay with the Maasais, I had the chance to participate in many marriages. On one occasion, I was directly involved in the rituals leading to marriage. The husband-to-be had known his bride for some time. They agreed to get married, which was a breach from tradition. In the past, the bride would come to know her future husband only days before the wedding, and had little to say about the union. This groom then had to talk to the father of the bride to agree on the marriage itself, and the number of cattle the groom can offer the bride’s family. The approval of the local council of elders, which had the final say in all important aspects of the community’s life, had to be obtained too. Having received the council’s approval, the groom provided the first three heads of cattle to the bride’s family. However, her father complained about the quality of the cattle. After a lengthy discussion, a bottle of alcohol, sugar and blankets had to be added to appease the spirits. It was only at that point when the wife-to-be was asked to state her intention of getting married.

The following morning, I witnessed the final ceremony of the traditional Maasai wedding. The bride was woken up by the mother and other elderly ladies. She was dressed as a married woman, and adorned with the necklaces stating her status. She was then taken to the entrance of the enk-ang (homestead) where her father was waiting. There, the elderly man prayed over her, reminded her of her duties as a wife, and then blessed her. The blessing consisted of a litany chanted while sprinkling the legs and feet of the bride with milk mixed with en-kare pus. The newlyweds and the friend who accompanied them went away in Indian file. The friend opened the way, making sure the path was free from obstacles. The husband followed and the wife closed the line. They were then married in church.

After the wedding, I was invited to join the couple for a private party. This party consisted of a simple picnic with the participation of the couple and a few friends of the groom. We ate and drank the same things the other guests had back at the church. We then rejoined the assembly and continued the party. The family of the bride participated in both the religious ceremony and the feast afterwards, another breach in tradition. In the past, once the bride left the paternal home, she would not go back. She was not even supposed to look back while moving away. She did not belong to his father’s family anymore. Contact with her mother and siblings would be limited, and would only happen after a long period of time.

In all the weddings I presided over, I insisted in the celebration of both traditional and religious wedding ceremonies. My decision was based on the fact that a union that had not been sanctioned by the community – families and elders – was bound to be weak. Also, in the eyes of the community, the marriage would be recognized only if the traditional steps had been followed. This pastoral practice adopted by my pastoral team was supported by observation and common sense. None of us – fathers, sisters and catechists – was an expert in inculturation. In deciding how to deal with the sacrament of marriage, we listened to other pastoral agents, who had considerably more experience than us. At the same time, I asked myself how to help in the process of inculturation of faiths.

In the case of marriage, I realized there were some features of traditional Maasai marriage that were also important in the case of Christian marriage. The dimension to be preserved is the priestly function of the bride’s father. He blesses the bride and this blessing is considered essential. To marry against the will of the father would only spell disaster. This blessing is also performed at the main gate of the enk-ang, which is the place used by people and cattle to enter the homestead. This is also the place where people are welcomed and allowed to be part of the family who lives there. Blessing a person in this particular place has the meaning of welcoming, acceptance, belonging. In blessing his daughter, the father acts as a priest. This is an important aspect because, usually, the Maasai father blesses only his sons. It is unusual that he would bless his daughter. The blessing of the bride is thus a unique and important action which should be preserved.

More could be said of the role of the groom’s friends. They pose as witnesses, as supporters at a time of decision making, as those who clear the way from obstacles to allow safe passage. All these aspects could find a place in the time leading to marriage and during the wedding ceremony.

The Importance of Inculturation

Christian initiation, marriage, the preaching of the Word of God and the sacraments, are all extremely important for evangelization. Unless the proclamation of Christ is done in line with the receiving culture, one runs the risk of working a lot and gathering little. This means the missionary needs to support the process of inculturation. Inculturation is the process enacted by a person of a given culture. This person will have to welcome a new value from another culture, digest it and reformulate its ‘shape’ in such a way that the value remains intact but it would now be understandable and acceptable by the host culture. In other words, inculturation is the honest and serious attempt to make Christ and His message evermore understood and lived wholly by the peoples of every culture, locality and time. It means the reformation of Christian life and doctrine into the pattern of thought of every people so that it departs from the conviction that Christ and the gospel are dynamic and challenging to all times and cultures as they become better understood and lived by each people. It is a continuous endeavor to make people of every culture truly "feel at home" with Christianity.

Liturgy is one area where inculturation is important. I am Italian, and I am used to the way Italians celebrate. It would be a mistake to think that the liturgical tradition developed in Italy is as good elsewhere. Latin Catholic liturgy is built around Western sensibility. Eastern Catholic liturgy is quite different, and it talks to eastern cultures. I felt also the liturgy in Africa needs to reflect the way people perceive the sacred and celebrate God’s presence. This is why I support the inculturation of liturgy.

Liturgical action speaks to the community of believers. This is why the Church suggests to use different symbolic actions in different time of the year. For instance, in Lent, a priest may sprinkle water on the faithful at the beginning of the Eucharistic celebration to signify the need of cleansing. In Advent, violet candles are lit to symbolize the period of waiting for Jesus’ birth. During certain celebrations, the Bible is enthroned and blessed with incense. The faithful are aware of the meaning of these actions and symbols. There is no need to explain; the signs speak for themselves.

Signs also speak to those who are not yet part of the Church and witness to Christian liturgies. This is very common in Africa. Often people who are not Catholic are invited by relatives or friends to go and pray with them. They see how the local community prays and certainly ask themselves the meaning of words and actions. Whenever the symbols used are in line with local culture, they automatically pass on the meaning they point to. This is how an inculturated liturgy can become a tool of evangelization. Once people, who are not members of the community, are able to see what the assembly does and celebrates, they also receive a glimpse of the truth of the Gospel. Liturgy thus becomes an instrument of evangelization.

The ‘Kingdom of God’ is a reality in the making, not yet fulfilled. It is God’s Spirit in action in the world, growing like a seed without being noticed. Christians pray that this Kingdom may expand…

Unless safe, legal migration routes are created, traffickers will continue to do what they want, and tragedies like the one in Chiapas, Mexico, will happen again, especially in developing and war-torn…

Into the “no man’s land”

A heart filled with passion for service to the young has brought Fr. Vicenzo to go beyond peripheries into the “no man’s land” – the dark corners, inhospitable situations of abuse and exploitation –…