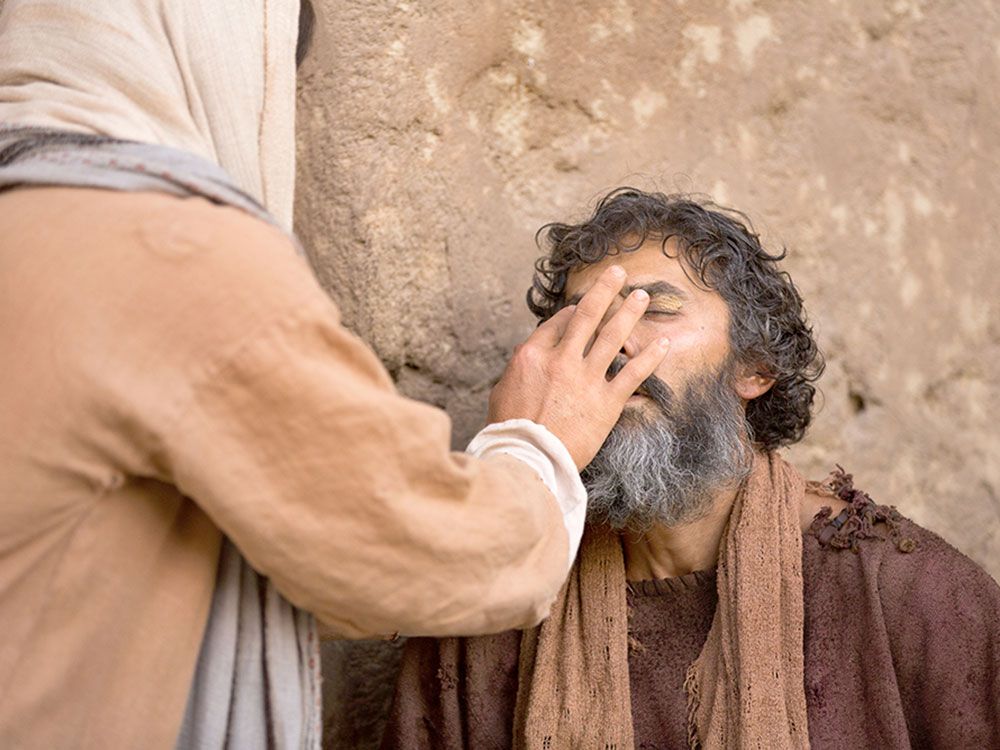 In the encounter with the man born blind, Jesus reveals Himself as the Light of the World, as the One who brings us into the light of life. Physical healing is a symbol of inner healing that awakens the heart and mind to faith in Jesus.

Jesus’ encounter with the man blind from birth is described in the ninth chapter of John’s Gospel. The Synoptic Gospels, in turn, refer to other encounters of Jesus with the blind, which may also be considered in the contemplation of this encounter (Mark 10: 46-52, Matthew 9: 27-31, Luke 18: 35-43).

In John’s narrative, there is an aspect that catches our attention. The meeting takes place in Jerusalem, near the Temple – the center of religious power, in the excited atmosphere of the Feast of Tabernacles. In chapters 7 and 8, John describes the tension that arises because of the presence of Jesus. He proclaims Himself as the Light of the World (7:12) but the religious authorities close themselves in a blindness that prevents them from recognizing Him as the Messiah.

The narrative of the man who had been blind from birth takes this tension to its fullest. In a lively dialogue, the reader senses the contrast between this simple, blind-born person who comes to a vision of faith, and the religious authorities who, knowing the law and prophecy, are unable to see what is obvious.

When the light appears, the Pharisees close their eyes and remain in the darkness; to the man born blind, the eyes are open and illuminated. This contrasting twist happens through Jesus’ initiative, who sees the blind and reveals Himself to him as Light. In the Jewish Scripture, life and light are intimately linked. Light is the principle of life: it allows us to distinguish, to know, to enjoy and to love the presence of people and things. Darkness, on the contrary, is a principle of deception, confusion and death. To be born is to pass from darkness to light.

The work of god

Jesus’ encounter with the blind and the healing are introduced in the narrative of John by a dialogue between the disciples and Jesus. In verse 2, the disciples ask: “Rabbi, who sinned, this man or his parents, for him to have been born blind?” Jesus answered: “Neither he nor his parents sinned; he was born blind so that the works of God might be displayed in him.” In this dialogue, in which Jesus justifies and explains His action, the central statement comes in verse 5: “As long as I am in the world, I am the Light of the World.”

Jesus sees the situation of the man blind from birth as an opportunity to accomplish the work of God: to bring His children into the light of faith. The work of God, the creation, was made possible by the light. On the first day (Genesis 1: 3), “God said: ‘Let there be light,’ and there was light.” In this perspective, Jesus speaks of His work, the work that the Father entrusted to the Son: bringing people to the Light: “As long as I am in the world, I am the Light of the World.”

After this theological framework, the narrative (9: 6-7) tells us what Jesus did to fulfill the work of God and to give light to the blind man: “When He had said this, He spat on the ground and made a paste with the spittle, put this over the eyes of the blind and said to him: “Go and wash in the Pool of Siloam.” So the blind man went off and washed himself, and came away with his sight restored.”

John’s narrative continues with the dialogues, full of humor and wit, between the blind man and his neighbors, the Pharisees, and his own parents.

Suddenly, the neighbors, who know very well the blind person, do not recognize him and appear uncertain about his identity. The only one to affirm his identity is the blind himself (“I am the man”) and saying, without fear, what Jesus had done to him.

This uncertainty about the identity of the blind man and the fact that he does not know who was the person who healed him causes the healed blind man to end up before the religious authority, so that the situation may become clear. While the Pharisees remain blind to the identity of Jesus, the man born blind has a transparent and clear sight, in the testimony he gives about the person who healed him: “He is a prophet.”

Finally, in order to clarify the identity of the blind man, his own parents are called into question. We are surprised by their fear in avoiding confrontation with the Pharisees. Faced with the question about the identity of their son, they prefer to leave him alone with the consequences of the answer: “He is old enough; let him speak for himself.”

The blind man is left alone with Jesus ... The scene concludes with the dialogue between Jesus and the blind, in a second encounter of great beauty and intimacy. Jesus, knowing that the Pharisees had expelled the man from the synagogue, sought him out and completed the cure by bringing him into the light of faith: “Do you believe in the Son of Man? Sir, tell me who He is so that I may believe in Him.” Jesus’ answer makes him return to the cure he had experienced: “You are looking at Him; He is speaking to you.” Thus the man born blind comes to the profession of faith in Jesus, prostrating himself, he said: “Lord, I believe!”

The scene of the encounter concludes with the words of Jesus: “It is for judgment that I have come into this world, so that those without sight may see and those with sight turn blind.” The word “judgment” is the key in the conclusion of this encounter: Jesus enacts a judgment that turns upside down the way people think and reveals the way God thinks. The evangelist John builds his narrative on this background of judgment, contrasting Jesus and the man blind from birth, on the one hand, and the Pharisees, on the other. The contrast of the expressions prepares the reader for the final sentence: The Jewish religious authorities who presumed themselves to see, are condemned, and Jesus is justified as “Light of the World.”

This narrative of John is essentially Christological, even when Jesus disappears from the scene. The various dialogues set in motion a process of discovery of Jesus who, even absent, is at the center of the discussions and controversy. This process is ascending, from not seeing to seeing. A process that has its phases (mud in the eyes, wash up, and finally… see); a movement from seeking Jesus and knowing who He is, to reaching the point of the confession of faith: “Who is he, Lord? ... I do believe, Lord!”

In the text, there are other messianic titles that are remembered. In addition to the Light of the World, Jesus is sent from God, the Messiah coming from God, Son of Man, eschatological Judge, Lord. Names that explain aspects of Jesus’ identity revealed in this encounter and in the dialogues that led to the blind man’s profession of faith.

In the light of this narrative, we live our encounter with Christ as an experience of washing our eyes, coming to the light of His presence, and recognizing His divine identity. The blind person is the image of the catechumen and of the Christian who is enlightened by Jesus.

The darkness of uncertainty about the identity of Jesus threatens the Christian disciple in every time, place and culture: only in the encounter with Him do we come to the confession of His true identity. The Christian faith is to see, to open the eyes before the face of Christ that the kerygma (the Christian announcement) presents to us. In this sense, we are all blind from birth, unable to open our eyes by ourselves and contemplate the face of Christ, the face of the Other (God) and the others (in their true identity as sons and daughters loved by God, our brothers and sisters).

From Persecutor to Apostle

On the way to Damascus, Paul meets the Risen Christ. The impact is such that he becomes blind and experiences a radical change in his life. From opponent and persecutor, he becomes a disciple and…

Vocation is always a gift for us and for others, a blessing that makes us walk in the construction of a more inclusive and fraternal world.

Vocation is a path of discernment in which each person seeks to achieve life in abundance for himself and to be a sign of resurrection for humanity.