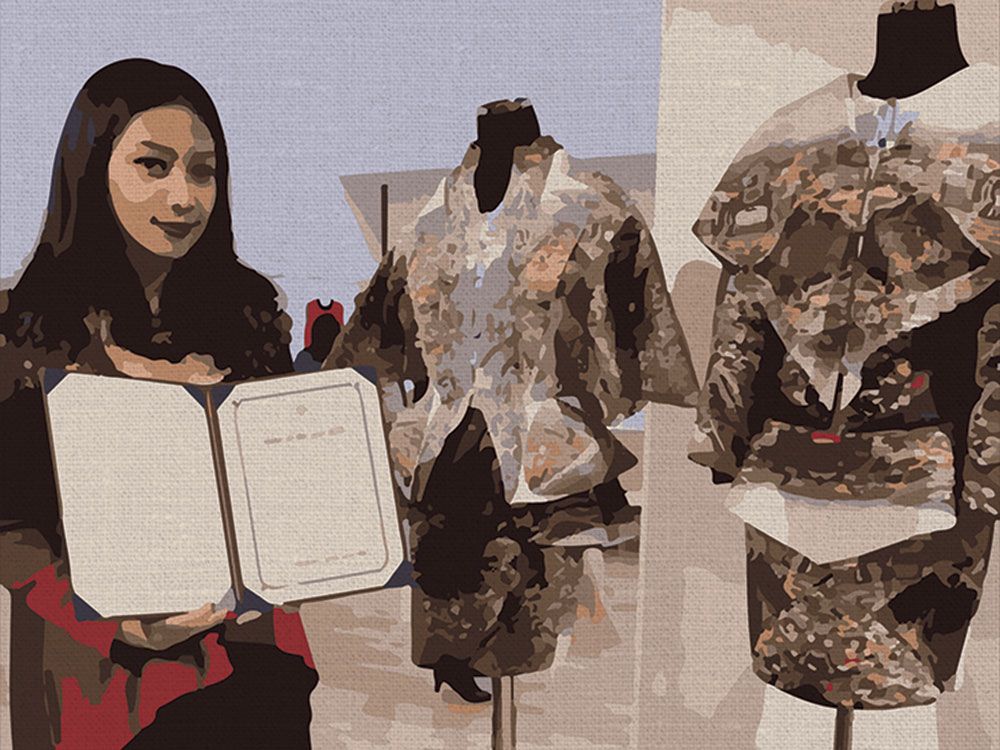 A Filipino designer’s work took center stage at the London Fashion Week. This was no easy feat.  Even with a decade of experience, Happy Andrada still got nervous. “It’s one of my biggest shows ever because, first, it’s solo and it’s in London.”

Andrada’s collection usually has her signature of avant-garde style of mixed masterful use of local fabrics. According to the Filipina designer, her collection is inspired by incantation: “(It is) paying homage to the energy of the earth,” she shared. “I am using natural materials and fusing it with organic and inorganic materials such as the piña blazer, which I embellished with some black and rust-like material. It’s avant-garde but still tribal.”

“I sent my portfolio, then they would call back, then you needed to have your dresses delivered there. Out of the hundreds who applied, they had 30 plus (designers) screened. The screening process was tedious as they invited bloggers, fashion people, press, and I was here in Manila.”

She had to send pieces of her collection to her sister who, luckily enough, lives in the United Kingdom. Her sister had to travel to the nation’s capital just to deliver her clothes.

What probably wowed the panel was Andrada’s use of native materials which she often fuses with modern garments. The sample clothes she sent were from her collection that she showcased in Antwerp, Belgium from the previous year. This was of Filipino tribal fabrics, such as piña and abaca, mixed with neoprene.

It was not only in the U.K. and Belgium that Andrada got to travel and show off Filipino fashion. Last year alone, the Central Saint Martins College of Art and Design graduate trotted across the globe bringing her newly-sewn clothes.

In 2016, she travelled to Japan for the Philippine’s Department of Trade and Industries, then to Canada and Mongolia, among others. For each country, she came up with different designs. In Japan, it was barong inspired. Barong Tagalog is a formal men’s shirt that is also considered as the Philippines' national costume. In Toronto, Canada, her garments were inspired by the works of Apo Whang-Od, the last traditional Kalinga tattoo artist. In Mongolia, she showed off the Philippine terno, the butterfly sleeved gown, using denim. In Amsterdam, Netherlands, her collection featured a futuristic style which she fused with abaca and pineapple fabric.

All of these designs seem to have one common element – the Filipino flavor in it. “I want to make sure that I use Filipino products,” Andrada said. “The feel of the fabric on your fingertips is different. It is also expensive because it is handwoven. I just wanted to support the industry of the weavers. ”

“I get materials from the different regions of the Philippines. I get from Benguet, from Aklan, Batangas, Lake Sebu, Zamboanga. I try to discover more in order to support our economy as it is something Filipino,” she said. “Also from the tribes, there are not that many people who make these loincloths and fabric, so I turn them into blazers.”

Andrada adds that this type of fashion is “eco-friendly; it is green fashion.”

One might think that the avant-garde style of Andrada might take her some time to complete an attire. She disclosed that it is quite the opposite as she already has a design running in her head which was probably why she came up with so many collections for 2016 alone. “I already have a lot of ideas, so I keep on working on different stuff. I just keep on editing and editing,” explains Andrada.

The last of Andrada’s international show was in Seoul, Korea. She was invited to exhibit two sets of clothes that she created specifically for the International Fashion Art Biennale in Seoul. “Basically, they get different artists and designers from different countries, and they have the exhibit in a museum which is held for a couple of days wherein we are able to meet different people from other countries. The organizers also toured us around South Korea showing us their culture. We were also able to talk about our own culture.”

Just like the other collections from other countries, this also had a touch of the Philippines. This time, she used a synthetic fabric which is neoprene but the difference was it had an aerial view photo of Manila which she herself took. She told us how that came to be. “I was on my way back from my exhibit in Tokyo and I took a photo of the aerial view while we were landing. The fabric’s design she used made her nostalgic. I liked the feeling of being home because there is no place like home. So, I just decided to use a print of that one.”

Still, there was something new to the photo, Andrada continued, “I photoshopped it and turned it into a kaleidoscope effect in neoprene. I just felt that if I was going to showcase something to the world, I want to showcase who we are as Filipino; and this is what we have in our country.”

Some of the designers took notice of the wonderful picture. “I was talking to other international artists and I was explaining to them, this is how Manila looks like, and they gasped; ‘Oh, there are so many greens there.’ (But no, actually it’s the cemetery.) I was also explaining to them what our roofs looked like because they were of different colors.”

At the end of the program, Andrada got the surprise of her life when she was called up the stage. “The whole program was in Korean. I couldn’t even understand, and then they called my name. I just went on stage and then read what was handed to me. I got the award as the Artist of the Year! The many international exhibitors, designers and artists who participated, really liked my work.

It was not even a competition, that is why I was surprised,” Andrada said.

After a London solo show, a win in Seoul, more are in store for Andrada as she will be showcasing some of her bridal gowns in March. In Paris, no less.

50 years after Ferdinand Marcos Sr. made himself a dictator by declaring Martial Law, his only son was formally inaugurated as the 17th President of the Philippines, after 31 million-plus Filipinos…

A Celebration of Freedom

The Philippines celebrates its 120th year of independence this June 12.  As the country prepares for this special occasion, we look at how Filipinos commemorate their independence day, not just in the…