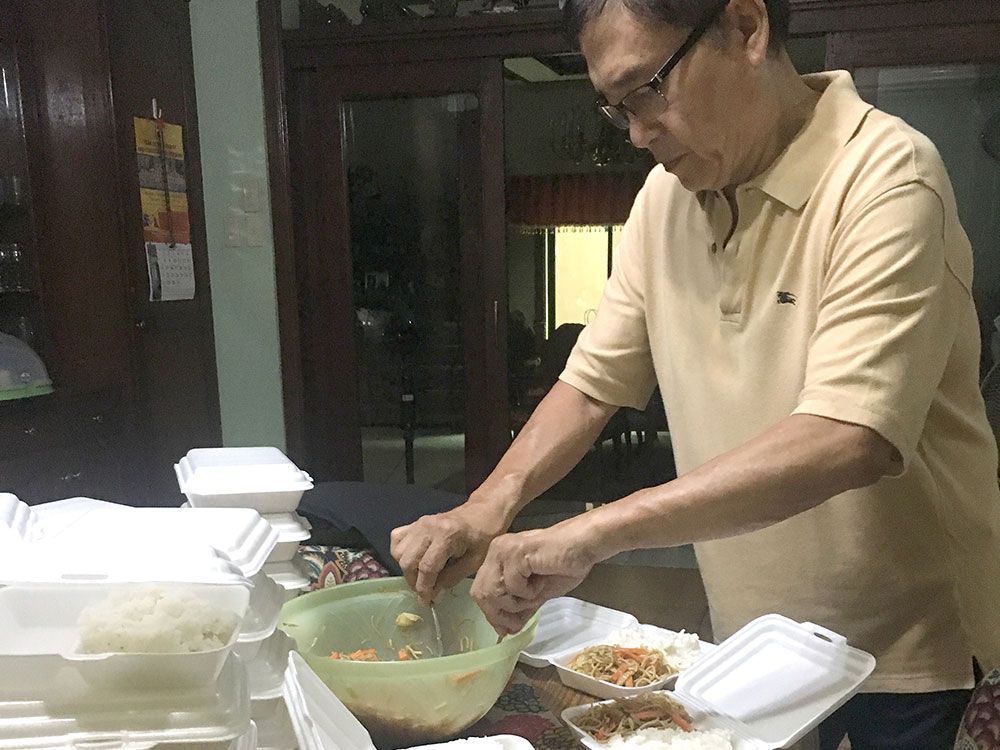 Here is the inspiring story of how a retired engineer and his wife in the Philippines, inspired by two people, are doing their share in their own simple way, of following Christ’s challenge of feeding the hungry.

When you give to the needy, do not let your left hand know what your right hand is doing (Matthew 6:3) is no longer a mere biblical verse. This “maxim” of life has inspired August Romero and his wife, Imelda, parishioners from Holy Family Parish, Kamias Road, Quezon City, in the diocese of Cubao.

For the last five years, the couple has been feeding poor people on the streets almost every week. And nobody knows about it  —  neighbors, family members, and friends. “We do not advertise or brag about it,” Imelda said. “It is our expression of faith or faith in action in a simple way,” she added.

“In one of the sermons I heard some years ago, the preacher said that one can help other people by giving them something they are in need of,” August, a 68-year-old mechanical engineer (retired), told World Mission magazine.

Inspiration From Dolphy
Keeping this in mind, the couple decided to feed people on the street. “You cannot give them money. It is sensitive to give them money, because one is not sure what they will spend it for. What is best we thought, is to give them food,” August added.

For doing this, August got inspiration from two people: one is the late Rodolfo Vera Quizon Sr., a Filipino director, comedian, movie, television, stage, and radio actor. He is fondly called ‘Dolphy’ who is known for his comedy works earning him the nickname, "The King of Comedy.” Every time Dolphy went out of his house, he always carried packets of sandwiches  which he distributed to poor people on the street.

“This was our background. We thought of doing the same in our own way in our vicinity — Kamias Road in Quezon City. All these poor people on the street are in need of food,” August recalled.

In the beginning, the home-cooked food of 50 packets with rice and meat were distributed once a month, then two or three times in a month. Then it became weekly. Now it is three times a week.

Influence Of Pope Francis
The other person who inspired August is Pope Francis. From the time he began his pontificate, Pope Francis has been speaking for the poor and their rights and dignity. “Pope Francis’ talks and sermons on the poor have touched our lives and way of living,” August said.

When asked how he prepared the food to be distributed, August said that he personally does the shopping the previous day and with love and passion, personally cooks the meal with the help of a housekeeper. The food is cooked in the morning so that it can be ready to be distributed by lunch time. Together with his wife, they distribute the food packets on different days in the various streets using their red car.

Better To Give Than Receive
“The more effort you put in it, the more satisfaction it generates for oneself,” he said, quoting another biblical verse or remembering the words of Jesus who said, “It is more blessed to give than to receive” (Acts 20: 35).

He explains that they never distribute leftovers or give away stale food. “We cook fresh food and distribute it. As soon as they get the food packets, they start eating these. They just thank us for the food. Our interaction or communication with them is limited. Sometimes, they can identify me because of my red car.”

“We go to the streets where the poor are. We avoid narrow streets so as not to obstruct the road and cause traffic. It is always a hassle-free service,” he added.

When asked why he does what he does, his answer was  —  food is basic to all. These people on the street always look for food. When they do not get it, they sleep. Consequently, they become crazy. It can drain their physical strength. When this happens, they are helpless in a way, he explained.

The retired engineer never considered himself rich. “We are not rich, but God provides enough for us. We can still survive with what we have.”

“We will continue to feed our brothers and sisters on the streets as long as we can afford and our strength permits. In case we physically cannot do it any longer, we may seek others’ help to do it. Until that scenario arrives, we will do it with love and passion and still keep it to ourselves,” August said.

Enlightened By Faith
The couple have a daughter and three grandchildren who are settled in the U.S.

August was born in Romblon Province on March 10, 1950. It is a cluster of 20 islands lying in the Sibuyan Sea that is practically at the center of the Philippine archipelago. It is south of Marinduque, west of Masbate, east of Mindoro, and north of Panay Island. Romblon is also known as the “Marble Country”.

August was educated at Don Bosco, Mandaluyong, Metro Manila. He earned his mechanical engineer degree from the National University, Manila. He worked as a teacher in Manila for a while and later he worked at the Balara water filter station in Quezon City.

“Now that I am retired and have enough time, I can help the poor in my own way. Every time I pass through some streets of Manila or Quezon City, my attention goes to people on the streets and I have a feeling for them. Thank God, I am trying to follow the dictate of my heart enlightened by my Christian faith,” August quipped.

A Filipino designer’s work took center stage at the London Fashion Week. This was no easy feat.  Even with a decade of experience, Happy Andrada still got nervous. “It’s one of my biggest shows ever…

Popular devotion in the Philippines presents some features which demand bodily suffering that can reach an extreme extent like flagellations, the yearly "transfer" of the Black Nazarene of Quiapo in…