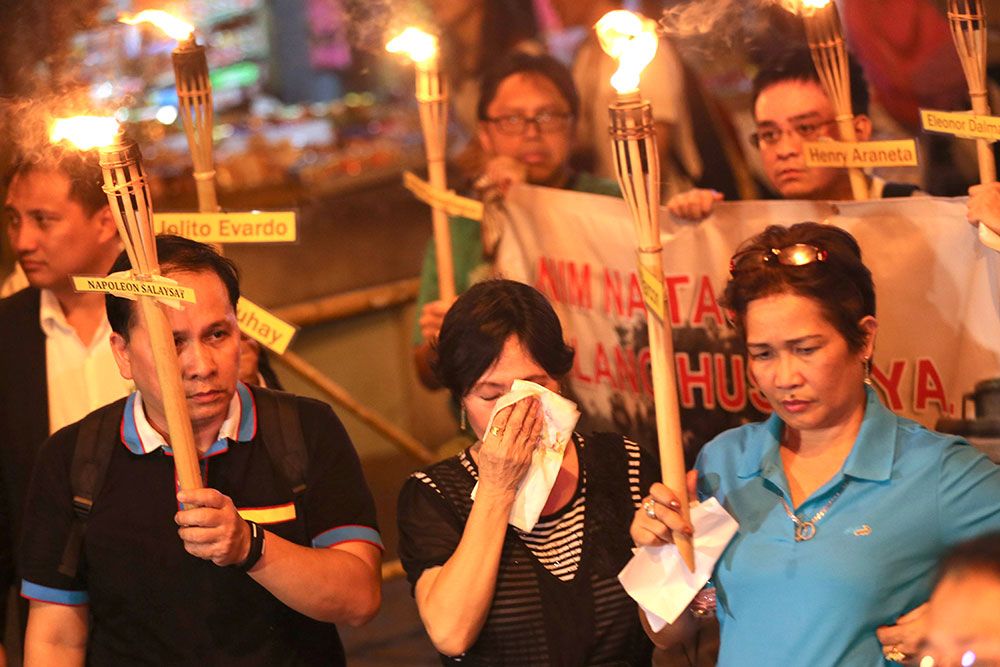 Journalists, writers, reporters, commentators have been silenced for speaking and exposing the truth. Since 1986, 177 journalists and media workers have been killed in the Philippines, making the country one of the most dangerous countries to practice journalism, according to the Committee to Protect Journalists.

Last November 23 was the 8th anniversary of the mass murder in 2009 of 58 Filipinos, 32 of them journalists, in Ampatuan town, Maguindanao province. This was the worst of all violent assaults on the freedom of the press anywhere in one single blow. A powerful political family allegedly carried out the killings against their opponents and killed the 32 journalists covering the elections. No one has been convicted for the brutal heinous killings.

The task of media is to report the facts, bring to the people the truth about the achievements, successes, failures and wrongdoings of government and the corporate world. That is at the heart of a democracy.

The powerful make accusations against some journalists claiming what they publish is fake news, when in fact it is the truth. The supporters of politicians using blogs or biased columnists spread fake news or propaganda.

It was the media who exposed the politicians who used fake NGOs to steal billions of pesos of government funds for their personal use. The Ombudsman is presently trying their cases.

That is the duty and role of the media and they need the constitutional freedom to tell the truth, which is essential to praise or question the policies and power of government. Without this freedom, there is no institution, individual or group to expose corruption and plunder.

If evil persists unchecked, human rights will continue to be abused, and the national economy will be damaged as it was during the Marcos regime. President Ferdinand Marcos closed newspapers and radio stations and controlled all the media as he plundered at will. Those who opposed him paid with their lives.

Impunity
In the Philippines, violence against journalists is frequently the response to media exposés of wrongdoing and corrupt practices. As many as 42 journalists have been assassinated since 2007 and no one has been convicted. The killers act with impunity and get away with murder. However, in the 2017 Global Impunity Index of the New York-based watchdog Committee to Protect Journalists (CPJ), the Philippines dropped from 4th to 5th place in the index.

Turkey is the jailer of the most journalists. President Recep Tayyip Erdogan has arrested many journalists and charged them with crimes to silence their critical voices. The Stockholm Center for Freedom says that Erdogan has jailed 240 journalists who still languish behind bars since May 12, 2017, and more have been jailed since then.

So why do powerful government officials and politicians fear and try to silence journalists as happened to the dedicated Maltese writer Caruana Galizia? She was killed by a bomb blast under her car. The Maltese Prime Minister Joseph Muscat was suing the journalist over her allegations of corruption in that EU country. Three suspects have been arrested but the mastermind behind it has not been named.

Freedom To Speak
The state, corrupt tycoons or mafia have the power to silence the journalists. They can use bombs, bullets, incarceration, threats, false charges, and accusations. Yet the power of the word, with one well-placed outspoken journalist, armed with the truth, and evidence of corruption, can be a bombshell.

The truth can bring down the corrupt politician, expose the movie mogul, or business tycoon, as seen in the “#Metoo” movement. That is why investigative journalists of integrity are a dangerous threat to wrongdoers in society. They need protection and the freedom to speak and write the truth and tell it as it is.

We tend to misinterpret Jesus and His message because we have only a scant knowledge of the social and political environment of Palestine at that time. Let us have a look at the social reality at the…

It was not by accident that Jesus began His mission teaching: “Happy are the poor”, those who mourn, are merciful, work for peace, and suffer for a good cause. There is joy, satisfaction, a sense of…