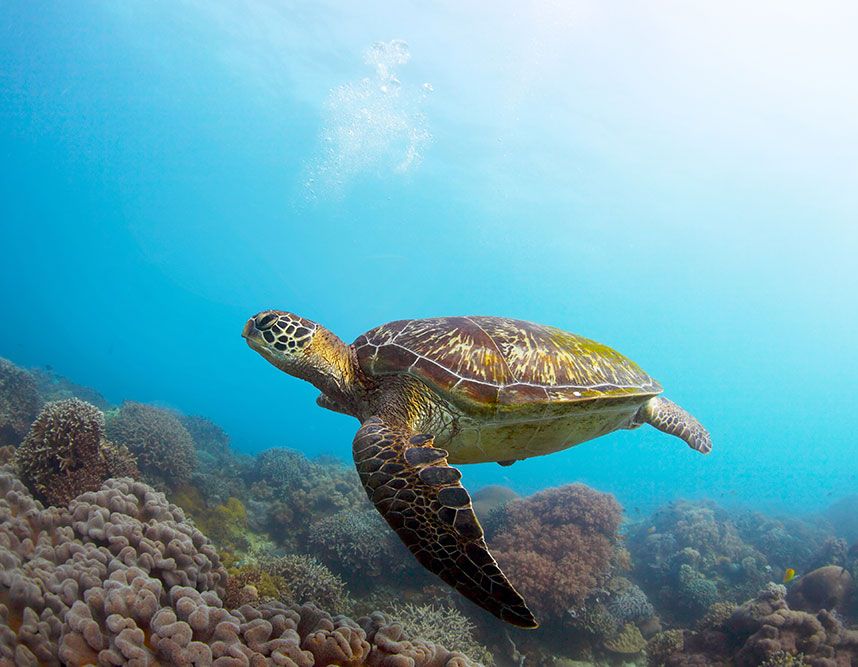 It is not just tawilis, lapu-lapu, sharks, and giant clams that are fast vanishing in the country’s waters. The Switzerland-based International Union for the Conservation of Nature (IUCN) has also included marine or sea turtles in its red list classification.

Of the seven marine turtle species known to man, five of them are found in the Philippines. All of them are considered “threatened species,” according to IUCN.  This means they are either vulnerable, endangered or critically endangered.

IUCN, the leading organization in determining whether a species can be considered threatened or not, uses the following criteria to identify threatened species: population size decline, number of mature individuals, geographic range, and statistical analysis.

The five identified species in the country are the green sea turtle (Chelonia mydas), hawksbill turtle (Eretmochelys imbricate), olive ridley turtle (Lepidochelys olivacea), leatherback turtle (Dermocheyls coriacea) and the loggerhead turtle (Caretta caretta). The trade of these marine turtles and its subspecies is strictly prohibited except for educational, scientific or research purposes.

Imminent Extinction
“All of the species found in our country are endangered, except for the hawksbill turtle which is critically endangered,” said Dr. Arnel “AA” Yaptinchay, founder and director of the Marine Wildlife Watch of the Philippines (MWWP), a non-government organization advocating the conservation and protection of marine wildlife and their habitats. “The only sure thing is that marine turtle populations are under tremendous threats.  If these are not stopped, extinction is imminent.”

According to MWWP, threats – whether man-made or not – impact marine turtles in all the stages of their lives, from eggs to adults.  “It is impossible to prevent natural predation, mortalities due to natural causes, or changes to the environment brought about by climate change,” the MWWP said.  “But reducing or even eliminating human-caused threats is possible.”

Main Threats
The biggest threat comes from harvesting eggs, juveniles and adults.  “Adults and juveniles are taken for their meat and their carapace for decorations,” MWWP pointed out.

In Barangay Daliao, a part of Toril, Davao City, it is common to see pawikan, the local name for marine turtles, being sold in the public market according to Truman Phillip Calipes, a former journalism student who conducted an investigative report for a school project. “Although local fishermen are very much aware that selling the endangered marine creatures is illegal and prohibited by the government, they are still doing it,” Calipes wrote.

According to the report, most of these fishermen caught the marine turtles by accident.  When they were pulling out their fishnets out of the water, there were instances when the endangered species were included. “But instead of returning these marine turtles back into the water,” Calipes wrote, “the fishermen would just put them in a different barrel and hide them in their fishing boats to elude detection from the local authorities when they arrive at the fish port for inspection.”

As for egg collection, MWWP says it is particularly prevalent in unmanaged turtle nesting beaches.  “Even in areas where there are conservation programs, poaching still persists in the community,” it says.

China’s Demand
But Filipinos are not the only perpetrators.  In an article published in Reptile Magazine, John B. Virata wrote: “China’s demand for sea turtle soup, turtle eggs, shells, and turtle bones ground up for use in medicine has caused Chinese fishermen to travel up to 700 miles off mainland China to hunt sea turtles in Philippine waters.”

The degradation of habitat has also contributed to the decimation of marine turtles in the country.  The ruin of the territories are due to increased effluence and contamination from coastal development, construction of marinas, increased boat traffic, and harvest of near-shore marine algae resources.

Tourism
Unknowingly, tourism may also play a significant role.  “Tourism in natural places that do not take into account the effect they have on the environment is the threat,” Dr. Yaptinchay explained.  “In the Philippines, where it seems that every inch of our beaches will soon be developed for tourism, this will become a big threat for marine turtles.”

According to Dr. Yaptinchay, developments on the coastline will displace marine turtles from one of their most important life cycle habitats, the nesting beach. “Lights, infrastructure, noise, domestic animals, and pollution will not only disturb those nesting females but also their hatchlings,” he said. “Marine turtles will not nest when disturbed.”

Studies have shown that marine turtles spend most of their life in the sea and get all the things they need there.  They even mate in the sea.  But when the time comes to lay their eggs, the females return to shore, usually in the same place where they were hatched.

“If you imagine a first-time nester approaching its place of birth, how much do you think its birth place or nesting beach remains over the last 35-50 years?” asked Dr. Yaptinchay.  “I would guess there would be very little space left for it to nest and enough disturbance developed to shoo it away. We are preventing them from fulfilling their life purpose. For me this is very tragic.”

In some instances, some tourism facilities view marine turtles as attractions.  “This is fine if you view marine turtles from a distance, but most (beach owners) are greedy and would take a turtle and put it in a tank for secured viewing for their guests,” Dr. Yaptinchay said.

“What they do not realize is that they have just disrupted the whole life cycle of the turtles,” Dr. Yaptinchay added. “Hatchlings are supposed to be in open pelagic waters for the first decade of their lives. Again, an important phase in their lives is affected.”

Climate Change
Marine turtles are also being threatened by climate change.  “Potential impacts of global warming, such as projected sea level rise, can lead to shoreline erosion of small, low-lying tropical islands,” MWWP says.  “Waves running up the shore during storms will wet the nests and increase egg mortalities at rookeries in these small islands, possibly decreasing the overall reproductive success of the marine turtle population.”

The Philippines, a Convention on International Trade in Endangered Species of Wild Fauna and Flora signatory, implemented the Pawikan Conservation Project nationwide through the Protected Areas and Wildlife Bureau (now known as Biodiversity Management Bureau) under the Department of Environment and Natural Resources in 1982. Since 2001, hunting, selling and killing of marine turtles have been banned in the country.

“The Philippines lies within the Coral Triangle, the most biodiverse marine environment in the world,” the MWWP declares.  “With this richness comes the responsibility to manage human activities around these resources to preserve ecological processes in order to maintain a healthy environment to sustain millions of Filipinos.”