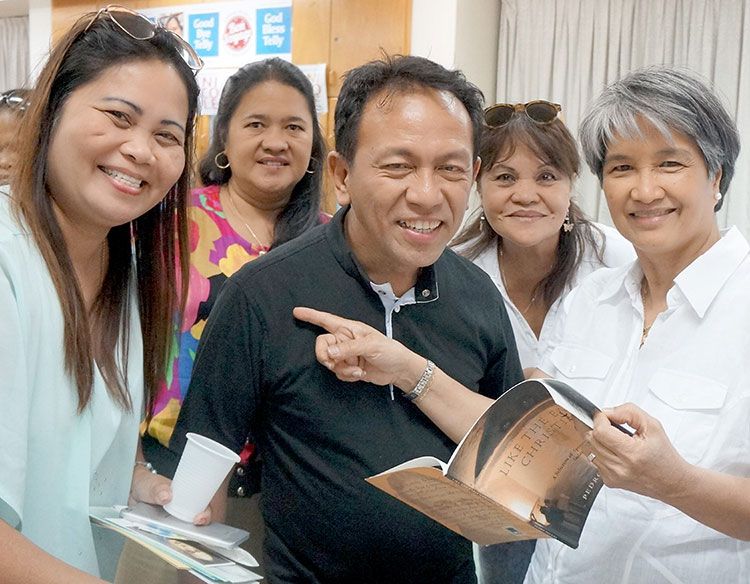 “Our Community Needs to Grow Spiritually”

Fr. Gerald G. Metal considers himself a missionary in Jordan where he attends to the spiritual needs of the Filipino community. Christians are respected in this Muslim majority country in which Filipinos contribute to the increase of the churches’ attendance.

Fr. Gerald, how did you end up in Jordan? How long have you been in the country and what has been your ministry?
When I turned 25 in the priesthood, an opportunity opened when I met Fr. Resty Ogsimer in a conference of the Association of Catholic Shrines and Pilgrimages of the Philippines. I expressed to him that I am interested in going to missions, even if it would mean going to Saudi Arabia. He said that Jordan is open. I expressed to the bishop my interest in going there.

I turned two years last December here in Jordan, connected with the Latin Patriarchate of Jerusalem, under the Vicariate of Jordan with Bishop William Shomali. I am currently the Chaplain of the Philippine Catholic Chaplaincy of Jordan. Basically, I am involved in the spiritual and pastoral ministry of the Filipino community here.

Are religious minorities, particularly Christians, well accepted and integrated in society? Does Islam pose any obstacle or threat to the freedom of religion?
The practice of Christianity is respected. Churches can ring their bells and keep their crosses on top of the church’s roof. The government sends security to places of worship when there are big celebrations like Christmas masses, Holy Week rites, and the pilgrimage to the Baptism site held annually. You don’t hear news of churches being attacked or bombed as in Egypt and in other Muslim countries. However, there are occasional incidents of Islamic fundamentalist attacks in Karak and Salt. The government immediately takes action whenever they occur.

Amman is an open city. Even Muslims have different points of views in the practice of Islam. Some ladies wear Western clothes and have removed their hijabs. While Muslims go to Sharia court to settle issues such as marriages, inheritance and properties, Christians enjoy a similar practice of their laws in Christian courts.

In spite of being a poor nation, Jordan welcomes hordes of migrants and refugees...

How many Filipinos are there and what are their occupations?
According to the Philippine Embassy, Filipinos in Jordan are around 46,000. These include Christians of all denominations, Muslims and people who choose not to be involved, but just work.

Most of our Overseas Filipino Workers (OFWs) are domestic helpers; some have taken part-time work in salons. Men usually work in mines, hotels and restaurants as cooks and waiters; they also work in airports, royal residences and embassies.

Do Filipinos give a positive contribution to the Christian communities?
Filipinos, just like in other countries, contribute to the large church attendance on Friday and Sunday services. Some, who were not active in the Philippines, find themselves involved in church activities. There is still room for development here, though. Since a good number of our sisters are working as “live in” workers, they cannot go out and attend Church services.

In the media, there is news of Filipinos being mistreated by their bosses and employers across the Middle East. Is this also a problem in Jordan?
The Filipinas are not exempted from the Middle East experience. I celebrate mass once a week in our shelter in POLO (Philippine Overseas Labor Office) OWWA (Overseas Workers Welfare Administration) building. I try to give them inspiration, encouragement and spiritual guidance. I have the masses streamed online to reach homes where our Filipinas could not come out and attend mass whenever possible. Luckily, I am not only reaching out to our people in Amman, but I also reach out as far as Aqaba and other Middle Eastern countries like Saudi Arabia, UAE and Qatar and even to Filipinos who find it difficult to understand masses in the U.S. and Europe.

What are the main challenges you face in your ministry?
The real challenge is to bring people closer to Jesus. We are still a community that needs to grow spiritually. We are still a divided community with factions here and there, with wounds and grudges that are harbored for a long time. There is also a challenge on morality. While I keep a merciful eye, I have to lead them to a morally upright life. Our people, out of loneliness, are living in adulterous relationships, namely lesbian relationships. Another big challenge is the “stateless” children; children born here who do not even have baptismal certificates. Even if they have baptismal certificates, they are not registered and recognized by the Jordanian government. They are not eligible for school and deprived even of medical help.

Do you go often to the Holy Land on pilgrimage?
About 80% of our workers here have not visited the holy places in Palestine. Some do not go out of ignorance; others do not go due to shortage of finance; others are just not permitted by their “madams” and are kept 24/7 in the houses; and most are lacking the luxury of spare vacation time to spend on a Holy Land pilgrimage. While a good number visit holy places here like Mt. Nebo, Anjara and pilgrim places like Salt, Madaba and the Baptism site, it is still difficult for most of them to cross to the other side.

What is your analysis of the current situation of Christians in the Holy Land?
While Christians enjoy the freedom to practice their faith, the situation is still volatile. Christian Jordanians, speaking the same language as their Muslim counterparts, say that there is still a line dividing them and enmity or hatred would spark any time just like in any other places in the Middle East. I hear stories of Christian children bullied in school by their Muslim classmates. However, currently, the Jordanian society is relatively peaceful.

Do you recall any particular anecdote of your mission work?
I only have a smile coming from a sincere heart trying my best to show who Jesus is – the compassionate God who invites them and accepts them whoever they are.

To be a missionary in the Muslim world is to care for the Christian minority and be witnesses to the Muslims through health care and education. Mission for the author is not about proselytising, but…

No strangers to natural calamities, Mexicans once again had to pull up their human resources to face head-on the latest devastating earthquake that brought the country to its knees. In times of…