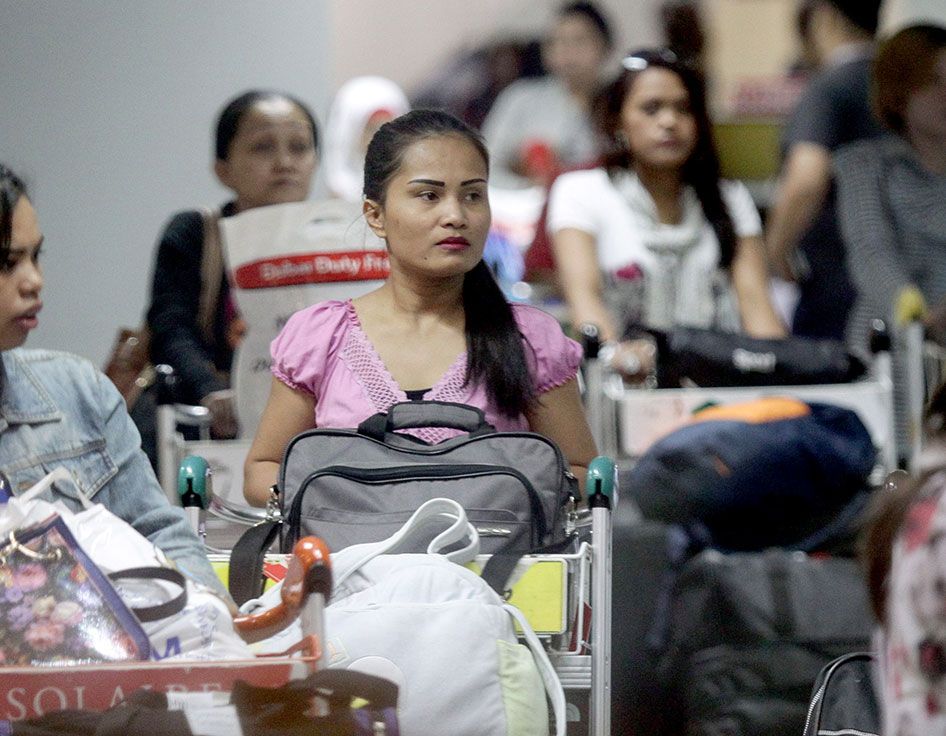 Philippine migration has both its positive and negative aspects. A balance of the benefits and costs of migration remains a challenge for Filipino migrants, their families, the government, the church and other stakeholders.

Filipinos have been going overseas to seek better employment opportunities since the 1970s, when the Marcos government deliberately sought to export labor to ease unemployment in the country and gain from remittances sent back by the Overseas Contract Workers (OCWs).

The term OCWs has since been changed to Overseas Filipino Workers (OFWs), who as of December 2013 numbered some 4.2 million. (Philippine Overseas Employment Agency).  If the number of undocumented migrant Filipinos is added, there would be another 1.2 million OFWs, constituting half of all Overseas Filipinos (OFs), with the remaining 50% being permanent residents or citizens of other countries.

In 2015, the key OFW destination region was the Middle East (64%) with Saudi Arabia, UAE, Qatar, Kuwait, Oman and Bahrain as the major countries. Asia followed next with 28% of OFWs, with the highest numbers in Singapore, Hong Kong, Taiwan, and Malaysia.  Since the mid-90s, more women than men have been going abroad because of the available jobs.  Labor migrants also tend to come not from the lowest income strata but from lower-middle and middle-income families.

Positive and Negative Aspects
Philippine migration has both its positive and negative aspects.  It has already been mentioned that remittances sent back to the country strongly contribute to the economy as well as help ease unemployment and underemployment. However, there are also the social costs of migration both for the migrants and the families they leave behind.

Among these is the breakdown of relationships between spouses, as with parents and their children.  Most migrants and their families back in the Philippines lament the loneliness, anxieties and emotional aches and longings from long-term separation, their inability to be present in the day-to-day lives of their spouses and children and to physically share moments of joy, grief, disappointments and excitement.

Social Costs
Studies have shown the negative effects of long-term separation of parents on the children left behind.  Migrant children, with OFW mothers, tend to experience more issues and problems with coping in school and may lack supervision and guidance, resulting in serious behavioral consequences such as substance use and early sexual relations.

While innovations in technology such as smartphones and social media applications like Facebook have led to cheaper and more efficient ways to communicate with loved ones, the challenge to ensure quality communication among family members in order to maintain positive and resilient relationships still remains.

Another major social cost is the family members’ dependency on their OFWs relatives not only for their needs but also for their many wants. Many OFWs hold the wrong view that they best help their families by giving in to their various demands to assuage their guilt from being distant from the family. Even grown-up children continue to rely on OFWs parents for their financial needs. Migrants work extra or double time to earn extra incomes or fall into debt just to meet family wants.

The cycle of economic dependence continues until the migrants can no longer work and must confront the reality of their own survival and quality of life upon retirement. Often, it can be too late to ensure that their financial conditions can suffice for their  retirement.

Furthermore, the challenge of becoming financially independent arises from the consumerist lifestyles of OFWs with higher incomes to buy things that they could not afford while earning in the Philippines.

Estimates show that 70 percent of OFs have been unable to save enough to reach their financial goals to allow for their return and reintegration despite decades of overseas employment. In 2007, Central Bank of the Philippines data indicate only seven percent of OFWs families had savings in banks and only 2.3 percent had investments, although recent positive trends in both increased savings and investments are promising. Hopefully, with more financial education, this can significantly improve.

The absence or lack of concrete financial goals and financial planning to reach those goals are major constraints to financial independence. If OFWs can overcome their financial challenges, they are in a much better position to help family members, even contribute more significantly to their communities and to the country through savings and investments back in the Philippines.

Enhance the Positve
For balance, it is important that the negative aspects of migration be mitigated and prevented where possible to enhance its positive aspects beyond the economic benefits. Migrants can contribute not only to their families’ well-being but also to their communities, their host societies and the Philippines.

Among these contributions would be the social, cultural and other non-financial forms of remittances that can be brought back to the Philippines based on the knowledge and skills they have gained from working abroad. These added knowledge and skills can go a long way in helping not just the migrants but also their families and communities.

It is therefore in ensuring a balance of the positive and negative aspects of migration that remains a challenge for the OFWs themselves, their families, the local and national government, the church and other stakeholders. With so many stakeholders coming together on the migration issue, the migration experience and results could be optimized for all actors, especially for the migrants and their families.

Parents’ Impact on Their Children

Parenting entails joys and challenges. A common concern for Christian parents who have to work on those two-fold factors — how to bring up their children religiously (instilling the gift of faith) and…