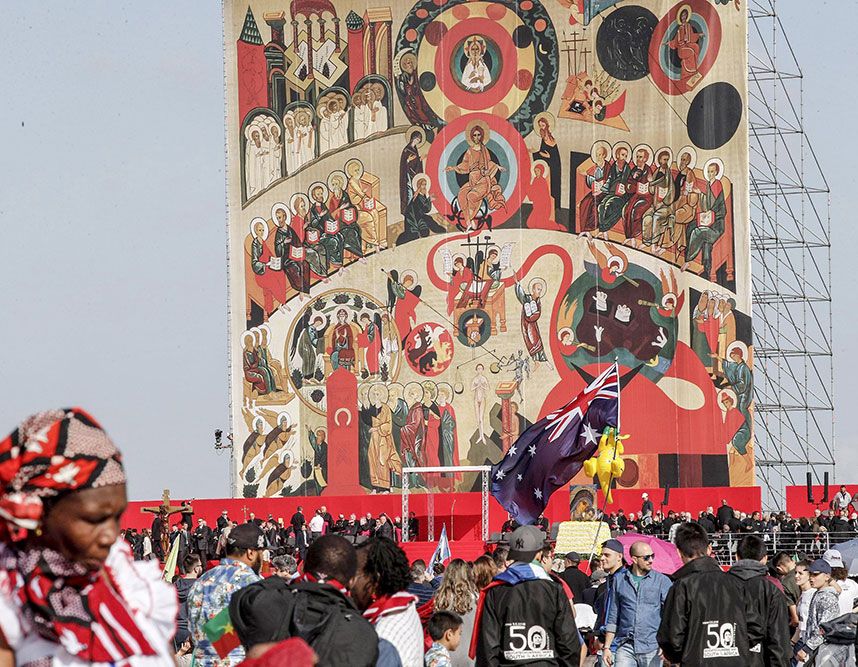 The Neocatechumenal Way is a worldwide Catholic movement that makes the participants rediscover their baptism. Many conversions and vocations to the ministry are often the cherished result of their demanding formation journey.

In March 2008, nine cardinals and 160 European bishops gathered at the Mount of the Beatitudes in Palestine, at the center of the Neocatechumenal Way. On that occasion, Cardinal Schönborn said: “During the last 40 years Europe has said ‘no’ to its future three times: in 1968 when it rejected Humanae Vitae; then twenty years later with the legalization of abortion; and today with homosexual marriages.” He called the Neocatechumenal Way an “answer of the Holy Spirit to this situation.”

The Neocatechumenal Way, also known colloquially as The Way, is a movement within the Catholic Church dedicated to Christian formation of adults. Taking its inspiration from the catechumenate of the early Church by which converts from paganism were prepared for baptism with thorough instruction, it provides post-baptismal formation to adults who are already members of the Church.

It originated in Spain in 1964 through the inspiration and dedication of two lay persons: Francisco “Kiko” Argüello and Carmen Hernández, with the purpose of evangelizing the slums of Madrid. In 1968, Argüello and Hernández arrived in Rome and started the first community in the Parish of the Canadian Martyrs. Since then, The Way has continued to spread to dioceses and mission countries around the world.

The Neocatechumenate is implemented in small, parish-based communities of between twenty to fifty people. It is estimated that there are more than 40,000 such communities throughout the world, with well over a million members. It also runs a hundred seminaries in various locations, and is responsible for hundreds of “families in mission” living in many cities around the world. In June 2008 the statutes of the Neo catechumenal Way received final approval from the Vatican.

God’s Marvelous Work
On that occasion, Fr. Mario Pezzi, the priest who belongs to the leading team with Kiko and Carmen, said: “I am very happy and grateful to the Lord for this day when the Way is recognized by the ministry of Peter. I also have a story. Before being ordained a priest, I experienced an inner struggle. I was seeing a gap between priests and God’s people; people did not understand their language; the liturgy had very little influence in people’s lives; there was like a divorce between faith and life”.

Searching for an answer to his inner turmoil, the young priest met with the Neocatechumenal Way. He was attracted; he joined and found peace. Fr. Mario not only found serenity in The Way, but was also called to join Kiko and Carmen as the first presbyter. Since then he has belonged to the “International Responsible Team” of The Way and he will be in such position for his entire life.

Pope John Paul II summarized the role of the NC Way’s itinerant catechists in December 1985: “They contribute by forming the first Neocatechumenal communities of a parish, and are supposed to maintain regular contact with the bishops of the diocese in which they work”.

Approximately every three years, the World Youth Day has been organized by the Roman Catholic Church, during which the Pope summons youths from all over the world to a chosen city. The Way has been an active supporter of these, rallying its young members to attend. For instance, during World Youth Day 2008, 40,000 youth members were from the Neocatechumenal Way.

Extraordinary Vocational Call
During the event, the youth members usually meet with Argüello for a “vocational call.” In Sydney, for example, approximately 1,500 men answered the call for the priesthood and 850 young women stood up to show their willingness to enter the consecrated life. The same happened in other World Youth Days. These young men and women then begin a process of discernment in their own dioceses and communities, which may lead to priesthood or consecrated life.

The spreading of the Neocatechumenal Way has not been without controversies and criticisms, especially because of the length of their formation journey and the fact that The Way separates its members from the rest of the parish communities. On the whole, however, this has been avoided with better dialogue and understanding between the leaders of The Way and the local pastors.

On March 6, 2015, Pope Francis told the “Families in Mission” of The Way: “I confirm your call, I support your mission and I bless your charism. You will go in Christ’s name to the whole world to bring his Gospel: Christ precedes you; Christ accompanies you; Christ will bring to fulfillment the salvation of which you are bearers!”