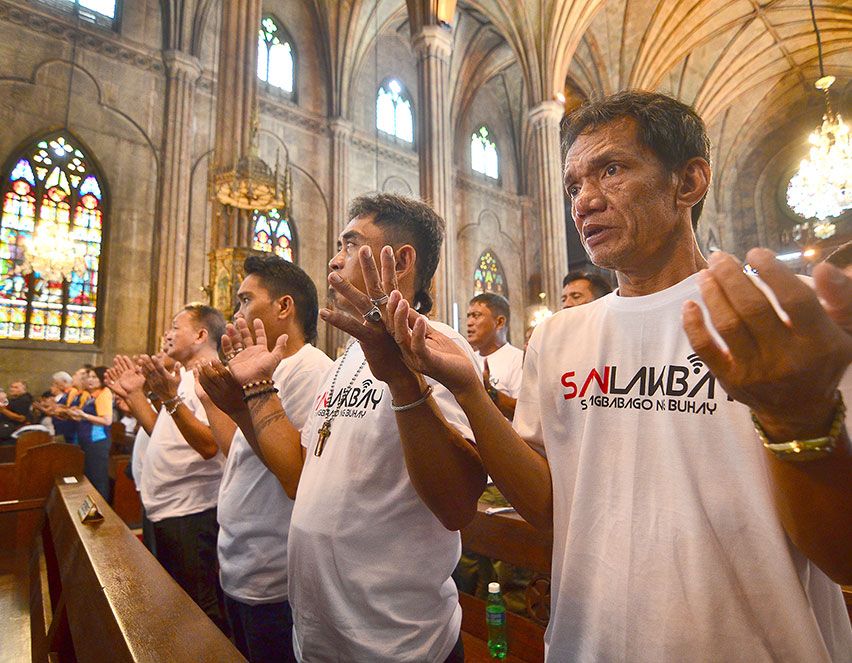 The journey of Fr. Bobby Dela Cruz from drug use to priesthood is a powerful testimony of God’s love. Today he is sharing God’s gift of redemption with drug surrenderers and persons deprived of liberty (PDLs).

If God writes straight with crooked lines, He must have worked doubly hard to chart the journey of Roberto “Bobby” Dela Cruz. As a high school student in an exclusive all-boys school in Manila, Bobby spent most of his time with his barkada (gang) with little concern for his studies.

To fit in with his peers, he smoked cigarettes, drank alcohol, and experimented with marijuana. He never got addicted but, wanting to be “cool” and earn money became a marijuana dealer.

He and his friends frequented nightclubs to watch lewd shows, and held regular drinking sprees that often culminated in sex with women of ill repute. At age 13, he was arrested for the first time after getting involved in a campus fistfight.

This would be followed by more arrests for petty crimes such as vagrancy, rumbles, and a shooting incident inside the campus. By the time he was in college, Bobby had added to his long list of vices: gambling. He became a regular in casinos and financed a horseracing bookie.

Cut Off From God
“I wanted to be somebody,” says Bobby of the motivation behind his adolescent decisions. Although his middle-class family is Catholic, they were not churchgoing people. He went to Catholic schools in elementary, high school, and college, but was never interested in faith.

His parents were successful entrepreneurs who gave their seven children a comfortable life. Bobby’s family was not without its flaws, though. One incident left a lasting mark on the young Bobby’s psyche–an emotional and psychological scar that would have a profound effect on the way he saw the world and other people.

One day while playing outside their house, Bobby was bullied by a boy who was the neighborhood toughie. Scared and in tears, he told his father about the incident, certain that his stern patriarch would harshly reprimand the bully. Instead, his father told him to deal with the problem himself and blamed him for being a weakling.

For the young boy who looked up to his father, the rebuff was devastatingly painful. “I felt orphaned, and the seed of distrust was planted in my heart. On that day, I declared my independence from my family.” From then on, Bobby would make decisions on his own, convinced he had nobody to depend on but himself. A nominal Catholic, he separated himself from God and did what he felt was right.

In the mid-1980s, Bobby had just finished college. A friend asked him to try shabu; he did and quickly became addicted to the potent amphetamine. As a high school student, he had resorted to filching small amounts of money from his parents to sustain his vices.

This time, to feed his shabu addiction, he stole things from their house. Working in their family business, he forged his mother’s signature to encash checks for himself. It was only a matter of time before he started selling shabu, initially on a small scale. However, gambling losses landed him in debt.

To pay off his mounting gambling liabilities, he stopped going to casinos and expanded his shabu supply operations. Business was good, affording him an affluent and luxurious lifestyle. Bobby was arrested repeatedly but never stayed in jail for long. Multiple cases filed against him were all dismissed.

Bobby went through several drug rehabilitation programs without success. After finding out about his repeated relapses, one rehab center refused to admit him. His family became aware of his worsening situation and his mother stood by him with unconditional love. Finally, he was brought to the Welcome Station in the National Center for Mental Health in Mandaluyong City.

“You have no more hope, Bobby,” his doctor said. “If I can bring you to a Christian community, perhaps you can be renewed.” Bobby dismissed the idea; he found religion oppressing and it curtailed his freedom. After 10 years of living in darkness, he resigned himself to his fate. “I knew what I was doing was wrong, but I stubbornly held on to the idea that a sober, decent life was dull and not worth living. I was trapped in a vicious cycle, and couldn’t do anything to get out.”

Turning Point
Bobby ended up in jail for the last time after drawing the ire of a police official. The cop arranged for his arrest and the filing of drug-related charges against him. The judge, having had enough of his recalcitrance and taking pity on his mother, proposed an ultimate solution: Bobby must leave the country and never return. He agreed and was released on bail. While his family was preparing his travel documents, Bobby stayed in his sister’s house in Quezon City.

He spent his days watching DVD movies but snuck out every night to a nearby hotel to join his friends in using and selling shabu. Soon, he got bored of watching DVDs all day. “I told my sister I wanted to hear mass in the neighborhood parish, which was actually just a convenient excuse to get out of the house and ease my boredom. She was happily surprised and agreed with my plan.”

During one of the masses, an invitation to an evangelization activity by the Neo-catechumenal Way was announced. Out of curiosity and expecting nothing, Bobby attended the evangelization initiative. He found himself listening intently to the speakers. “I was like a sponge, absorbing everything they were saying.”

At the end of 1994, the evangelization participants, including Bobby, formed a community. “Through our community, I was introduced to Jesus. My intimate and vibrant personal relationship with our Lord blossomed through the celebration of the Word of God and the sacraments, and by simply spending time with my community. Jesus filled what was lacking in me.”

In January 1995, Pope John Paul II visited the Philippines for World Youth Day. At that time, there was a call for priestly vocations in his community. Surely, Bobby thought, the call was not meant for him. Saddled with a dark past, he felt hopelessly unworthy. Moreover, his pending criminal case disqualified him from being admitted to any seminary. Still, he couldn’t stop thinking about the Pope’s words: “Courage! Be not afraid!” In the meantime, after two years of journeying with his community, Bobby quit his job to serve as an itinerant missionary in the provinces.

In 1997, Bobby expressed his fervent desire to participate in World Youth Day, which was held in Paris, France that year. However, he faced two huge problems. First, as a missionary, he was penniless. Second, his pending criminal case barred him from leaving the country. Bobby was unfazed. Through God’s grace and resourcefulness, he was able to gather enough money to process his visa, purchase his plane ticket, and book his accommodations. The second problem, however, was out of his hands. Three days before he was supposed to fly to Paris, he was informed that his criminal case had been dismissed. He was able to participate in the World Youth Day of 1997.

“What is happening here? I don’t deserve this wonderful blessing,” Bobby recalls thinking. “Is God trying to tell me something?” In Paris, filled with an intense desire to follow Jesus and guided by his mentor and community, Bobby discerned his vocation and said yes to his priestly calling. In 1998, he entered Redemptoris Mater Archdiocesan Missionary Seminary of Manila and was ordained on October 11, 2008.

Sharing God’s Gift
Today, Fr. Bobby is the Priest-in-charge of Sanlakbay, the drug rehabilitation program of the Archdiocese of Manila. Adopting a spiritual and psychosocial approach, the program helps drug surrenderers (drug dependents who voluntarily turned themselves in to the police) become morally upright and productive citizens.

Sanlakbay currently caters to drug surrenderers in 20 parishes of the archdiocese and also runs the program in the Manila City Jail for persons deprived of liberty (PDLs) who are plea bargaining their drug-related cases. Since its establishment in October 2016, Sanlakbay has admitted 1,120 enrollees, 349 of who have already graduated in the parishes.

“I am happy serving drug surrenderers and PDLs. I can easily relate to them because I speak their language,” says Fr. Bobby, his smiling eyes glowing with joy. “I received a tremendous gift from God, and this gift needs to be shared with others.” Sanlakbay, he explains, means accompanying drug dependents on their journey to rehabilitation and recovery, a journey that is rooted in relationships and ultimately in Christ. “I tried to live in isolation, and that path led me to the pit of misery. We all need to be part of a community.”

Fr. Bobby is convinced that he will never use drugs again, but admits he has many weaknesses. “I might fall into other forms of addiction. Fortunately, now I have God to lean on. I am no longer an orphan–this makes a big difference. I know that God loves me and has forgiven me. I know that He will help me overcome my weaknesses and not worry about how people see me. I am comfortable with who I am.”

Concern for justice towards the poor and the vulnerable, such as widows and orphans, foreigners and refugees, is at the heart of God’s covenant with His people. Jesus reaches out to the marginalized…

A Christian Fraternal Invitation to Equity

Few people have been enriched at the expense of the many who pay income tax. This reveals a particularly un-Christian manner of engaging in economic activity. Christian Tradition offers an authentic…