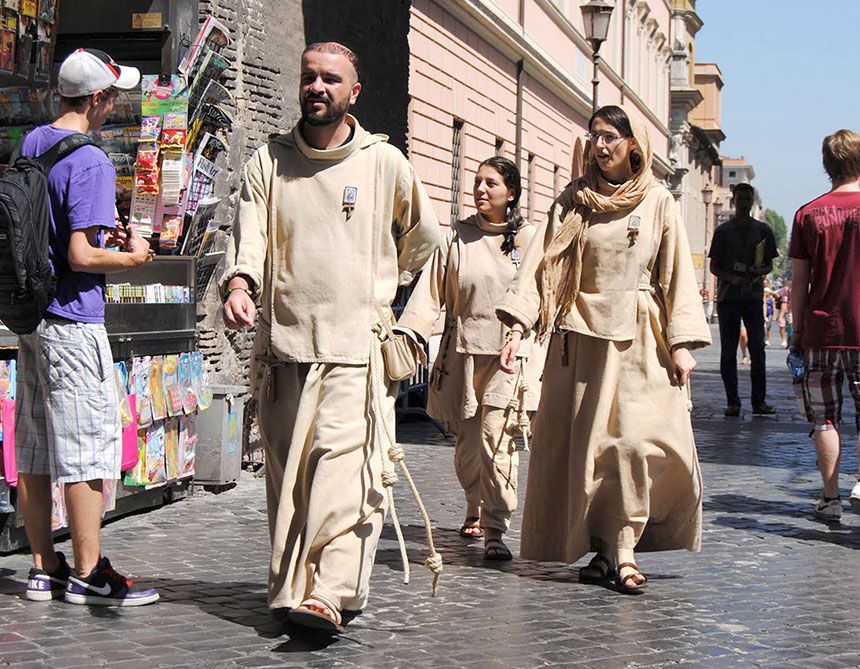 In The Footsteps of Saint Francis

The oldest movement founded by Francis himself, the Third Order Franciscans continues to guide those who want to follow in the founder’s lifestyle in their own lives.

Francis of Assisi is one of the most cherished saints in the history of the church but he lived and died eight centuries ago. What is so attractive about his way of living that people still want to follow it? Francis had the gift for seeing the face of Christ in everyone he met: bishop or leper, Christian or Muslim, friend or stranger.

Francis faced some of the biggest questions of his day: How do you respond to the growing gap between rich and poor? How do you make peace between enemies? What is our relationship to the world God made? Where is God when we suffer? Because these are also the questions of today, Francis has much to say to the people of our time.

The Members of the Third Order Franciscans are men and women bound by religious vows in numerous congregations, clergy, lay that are either married or single, serving God as they are called in the ordinary occupations of life.

In the latter case, they do not live together in community, wear habits, or follow the rule of literal poverty that Francis chose for himself and his friars minor. Being a Franciscan tertiary is one of many ways of responding to God’s love in the world according to Saint Francis’ spirit and lifestyle.

Peaceful Army
The Third Order Regular Franciscans developed in the early 13th century from the convergence of groups of penitents who were inspired by the life of Saint Francis.

Sometime between 1209 and 1220, Saint Francis communicated with some of these groups through a series of letters entitled the Exhortations to the Brothers and Sisters of Penance.

The Third Order congregations of men and women number over 200,000 male and female religious. They are founded by different people in different times but they all wear the Franciscans cord with the three knots representing the vows.

No Bearing Arms
The Third Order Secular is more remarkable. Francis came to mirror the love of Christ and the living Gospel so closely that nearly everyone who met him wanted to follow his way. His preaching, as well as his example, exercised such a powerful attraction on people that many married men and women wanted to join him.

He realized that not everyone could or should take up a celibate life of poverty and homelessness, yet he recognized that people unable to do this were still drawn to serve God with deeply committed hearts and lives. For them Francis found a middle way and in 1221 gave them a rule animated by the Franciscan spirit.

The rule prescribed simplicity in dress, considerable fasting and abstinence, and the canonical office or other prayers instead. Because of the prohibition of bearing arms, the followers of this rule came into conflict with local authorities, which customarily required men to carry arms for service in militias.

The prohibition against carrying arms dealt a blow to the feudal system and to the ever-fighting factions of Italian municipalities. Through the admission of poor and rich, nobles and common people, the social classes were brought nearer to each other.

From The Gospel To Life
Nowadays, the members of the Third Order Secular share in Francis’ charism and are called to make the lifestyle and message of the Gospel poverty present in the life and mission of the Church. The social dimension of the secular order integrates itself in the family, the working place and the civil structures by means of the safeguard of nature, people and their highest values.

The Brotherhood, as they call themselves, gathers more than 500,000 faithful of every walk of life and is present in some 60 countries. The spreading is more extensive in America and in Western Europe.

The formation is given in the bosom of the Brotherhood and left to the development of each individual member. It leads to the listening of the Word “going from the Gospel to life and from life to the Gospel” and to the reflection about what happens in society and in the Church, helped by the documents of Church’s teaching authority.

On the whole, as far as the mission of the Church is concerned, it is necessary to remember the uninterrupted faithfulness and devotion of the Third Order Franciscans throughout the centuries.