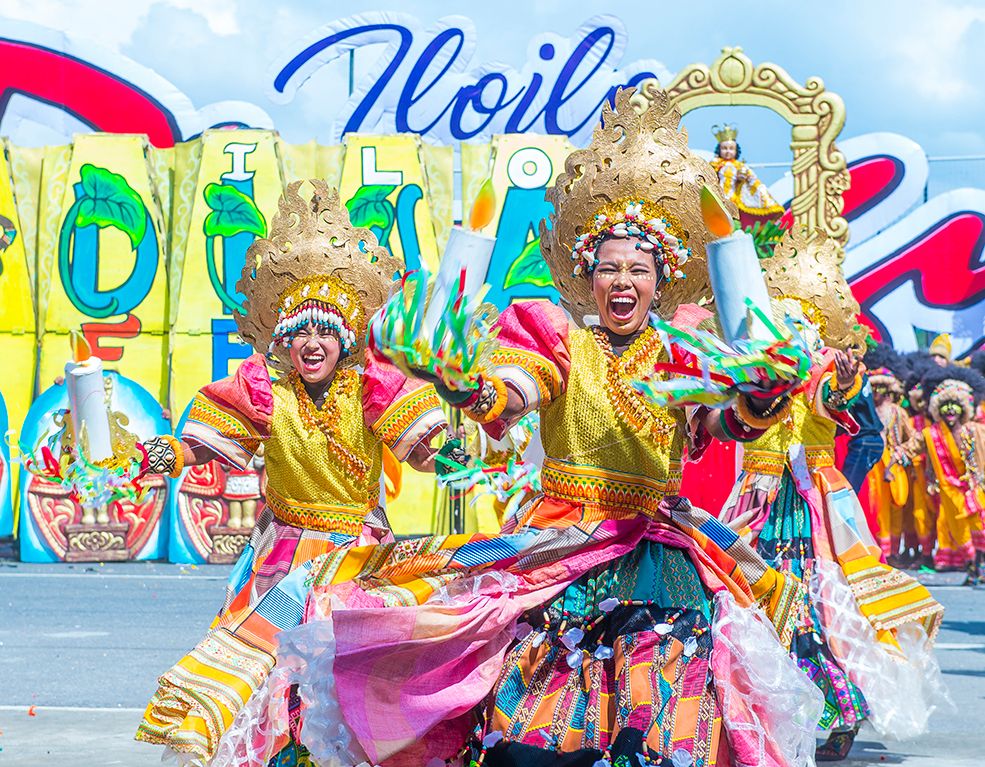 The acceptance of Christianity is evident in the festivals which show the popular response to it as an invitation to joy and celebration. In them, faith becomes culture.

Sometime during the thirteen century AD, a group of Malay chieftains called Datus, fleeing from the island of Borneo, settled in the Philippines and were welcomed by the Ati people, the tribes of Panay Island.

Sometime later, the Ati people were struggling with famine as the result of a bad harvest. They were forced to descend from their mountain villages into the settlement below, to seek the generosity of the people who now lived there. The Datus obliged and gave them food. In return, the Ati danced and sang for them, grateful for the gifts they had been given.

The festivity was originally pagan. Spanish missionaries gradually added a Christian meaning. Today, the Ati-Atihan is a huge religious festival celebrating the Santo Niño. The formal opening Mass emphasizes its religious character. The procession leading to the church begins with a rhythmic drumbeat and dances parading along the street.

The dances of the groups representing different tribes last for the whole week. The festival ends with a procession of thousands of people carrying torches and different kinds of images of the Santo Niño.

The Ati-Atihan Festival has inspired many other Filipino festivals including the Sinulog of Cebu and Dinagyang of Iloilo City, and legally holds the title of “Mother of all Filipino Festivals”.

The Sinulog Of Cebu
The Sinulog-Santo Niño Festival is an annual cultural and religious festival held also on the third Sunday of January in Cebu City and is the center of the Santo Niño Catholic celebrations in the Philippines. The Sinulog is considered to be the best festival in the Philippines, with every celebration routinely attracting around one to two million people from all over the country and even from abroad every year.

The word Sinulog comes from the Cebuano word sulog which roughly means “running water.”  It describes the forward-backward movement of the Sinulog dance. The dance consists of two steps forward and one step backward, done to the sound of drums. This movement resembles the current (Sulog) of Cebu’s Pahina River.

According to historical accounts, the Cebu natives already danced the Sinulog in honor of their animist idols long before the arrival of Magellan. Today the Sinulog commemorates the Filipino people’s acceptance of Christianity (specifically, Roman Catholicism), and the removal of their former animist beliefs.

Dance Steps
On March 16, 1521, the Portuguese explorer Ferdinand Magellan arrived and planted the cross on the shores of Cebu. He presented the image of the Child Jesus to the newly baptized queen Juana as they celebrated the conversion of Raja Humabon and more than eight hundred of his people.

This event is frequently used as the basis for most Sinulog dances, which dramatize the coming of the Spaniards and the presentation of the Santo Niño to the Queen. A popular theme among Sinulog dances is Queen Juana holding the Santo Niño in her arms and using it to bless her people who were often afflicted with sickness believed to be caused by demons and other evil spirits.

The Sinulog dance steps are believed to originate from Rajah Humabon’s adviser, Baladhay. When Baladhay fell sick, Humabon ordered to bring him into a room where the Santo Niño was enthroned, along with the other pagan gods of the native Cebuanos. After a few days passed, Baladhay was heard shouting and was found dancing with lively alertness.

Pointing to the image of the Santo Niño, Baladhay explained that he had found on top of him a small child trying to wake him up. Awake, Baladhay danced with the little child and explained that he was dancing the movements of the river. To this day, the two-steps forward, one-step backward movement is still used by Santo Niño devotees who believe that it was the Santo Niño’s choice to have Baladhay dance in such a manner.

Piety And Culture
Since the 16th century, there has been a great devotion to the Santo Niño in the Filipino popular piety, particularly in the Visayas. Pilgrims from different parts of Cebu and the rest of the Philippines make their yearly journey to the basilica to take part in the processions and festival.

The coming of Christianity and the devotion to the Santo Niño is also celebrated by the Dinagyang Festival of Iloilo, whereas the Moriones Festival in Marinduque is linked to the Passion of Jesus and takes place during the Holy Week. Belonging to the Christmas Season is instead the original Festival of the Giant Lantern of San Fernando, Pampanga.

The Festivals are witness to the enculturation of Christianity in the Filipino people and how the naturally festive character of the population has found in the joyful message of the Gospel a reason for gigantic communal expressions of vitality and joy.

Fr. Efren Borromeo has this gift of “seeing”. He can see through a person’s body, and knows what is wrong. He can see dead people. In fact, many come to him requesting for help and prayers.

The Church of Mongolia is celebrating its 25th year. Among those who helped establish Catholicism in the country is a Filipino. We got to talk with the Bishop of Mongolia, Wenceslao Selga Padilla and…