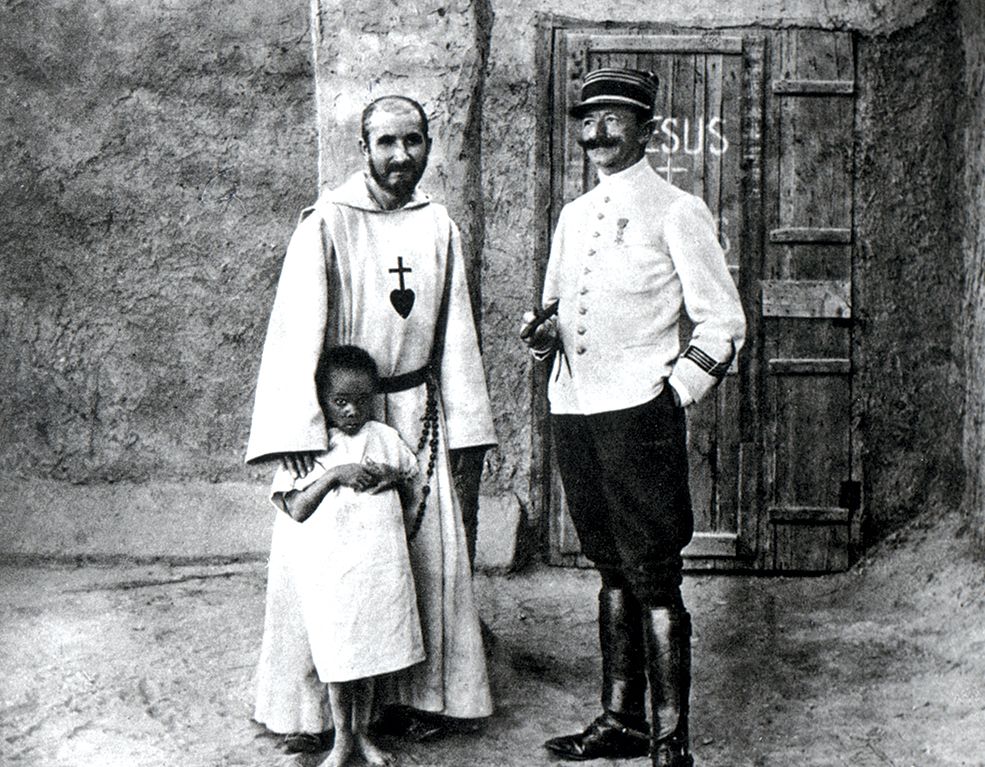 Just over a century after he died as a martyr, Blessed Charles de Foucauld (1858-1916), who brought the Gospel to Islamic lands and lived among the Tuareg people in the Algerian desert, will be proclaimed a saint later this year.

Charles called himself a “missionary monk” and came to establish his hermitage in the desert in southern Algeria among the Tuaregs, a nomadic population of the Islamic faith.

After finishing military school with the rank of a Second Lieutenant cavalry officer, Charles abandoned the idea of pursuing a career in the army, which had become a bore for him. He moved away from the Christian faith in which he had grown up and led “a life without purpose,” as he would later admit.

At the age of twenty-eight, while not knowing how to direct his life, he felt the need to study the Catholic religion, driven by his cousin Marie de Bondy to whom he was bound by deep friendship and with whom he would always maintain a close correspondence relationship, considering her as his “spiritual mother.”

He resumed going to church where he would spend long hours repeating the same prayer: “My God, if you exist, allow me to know you.” He embarked on the path of conversion, helped by Abbé Henri Huvelin whom he adopted as his spiritual guide.

No longer interested in seeking proofs of God’s existence, Charles experienced God’s infinite goodness. Almost simultaneously with the rediscovery of faith, the desire for religious consecration was born in him and he began to perceive “chastity as sweetness and a need of the heart.”

Attracted by monastic life in 1890, he was welcomed into the Trappist monastery of Notre-Dame du Sacré-Coeur, near Akbes (Syria). Life in the monastery, however, did not seem to be enough for him. Unsatisfied with the life in the Trappe, in January 1897, he left the monastery and went to the Holy Land, “so as to follow Jesus, the poor workman of Nazareth”. For three years, he lived as a servant in the convents of the Poor Clares in Nazareth and Jerusalem.

In the meantime, the desire to bear witness to the Gospel as a priest in mission countries where he dreamed of founding many hermitages dedicated to the Sacred Heart was maturing in him.

In August 1900, Charles returned to France. Fr. Huvelin agreed that he be ordained a priest. So, he went to spend a year in a convent praying and studying. In June 1901, he became a priest and asked to be called Brother Charles of Jesus.

Mission In Africa
Soon after, he decided to carry out his mission in Africa among Muslim populations. At the end of October 1901, he arrived in Béni Abbès, a little oasis in the Algerian Sahara on the borders of Morocco.

In January 1904, Charles left Beni Abbés and went to establish his hermitage at Tamanrasset, a southern outpost of the territories occupied by France, among the Tuaregs.

From the very beginning of his presence in Algeria, Brother Charles had it clear in his mind that his mission was not to convert, but rather to carry out preparatory work for evangelization, “without preaching, but rather by learning the language of the people, conversing with them, and establishing friendly relations.” He was convinced that “the word is important, but example, love, and prayer are a thousand times more important”.

In his letters to relatives and friends, he reiterated that he intended to ‘fraternize’, bring down walls of prejudice, and have affectionate relations with the Tuaregs: “I want to accustom all the inhabitants–Christians, Muslims, Jews, and idolaters–to look at me as their brother, the universal brother.”

Assiduous prayer and friendship nourished his inner life with Jesus: “I do not suffer from loneliness: I find it very sweet. I have the Sacrament of the Eucharist, the best of friends, to whom to speak to day and night”.

At the hermitage, Charles welcomed the poor, assisted the sick with medicines that relatives and friends sent to him from France, but above all he devoted many hours a day to the study of the Tuareg language (Tamahaq) with the help of a local interpreter. After an initial translation of the Gospels, he dedicated himself to the translation of the book of Proverbs, which echoes universal wisdom.

He edited 190 Tuareg poems in writing. He immersed himself in his main linguistic work: the creation of the French-Tuareg – Tuareg-French dictionary. He did not complete it until 1915, a year before his death, and it turned out to be a monumental work of 2,028 pages. This work aimed to offer an important tool to those who would be called to evangelize the Algerian desert population after him.

Ascetic Life
He led a hard ascetic life. To the many hours of prayer, he added more work, particularly in the linguistic field. His daily diet consisted of a mush of crushed wheat starch with a little butter, dates, and bread without yeast. Such a regime of life was bound to harm his health: he suffered a permanent state of physical weakness and severe headaches until he fell ill with scurvy.

Brother Charles strongly wished to share the mission with a companion to ensure the continuity of his work. He would make three trips to France in search of some priests willing to live the hermit experience in the desert with him, but he would never see his wish fulfilled.

He also hoped for the involvement of the laity in the work of evangelization and drew up the statutes of the Union of the Brothers and Sisters of the Sacred Heart of Jesus to “awaken vocations of lay people who would accept to settle with the Tuaregs” and lead them to conversion.

For Brother Charles, the mission was not limited to personal witness, but it had a broader purpose: “to civilize the Tuareg materially, intellectually, morally...” through school education, the example of work, the teaching of the elementary principles of natural morality, agricultural and livestock farming techniques, commerce and industry. He wrote: “Perhaps, in centuries, the local population will come to accept the Christian faith.”

In line with the mentality of his time, he considered Western civilization superior to the ‘backward’ civilization of the peoples of Africa, and was convinced that France “has towards the colonies the duties of parents towards their children.”

In his eyes, French colonization had to be exemplary, capable of demonstrating the superiority of Western civilization based on Christian principles. For this reason, he was openly outraged at the immorality and abuses of power committed by French soldiers, considering such behavior as unworthy of representatives of colonial power.

In 1912, he warned them: “If we treat these peoples not as sons and daughters but as exploitative material, the ‘union’ (of the colony with France– editor’s note) that we will have given them will turn against us and throw us into the sea at the first European difficulty.”

Like A Seed Of Wheat
In September 1914, war broke out between France and Germany, with immediate repercussions in the colonial territories. The anti-French rebellion grew, led by the movement of the Senussi coming from Libya, who were about to penetrate the south of Algeria. Radical Islamic preachers prophesied the coming of the Mahdi who would establish his kingdom, wiping out all traces of ‘Christian paganism.’

To win the Tuareg ethnic groups over to the cause of the anti-French revolt, the Senussi movement targeted those Europeans who had the greatest influence on the local population. They planned to capture the Christian marabout and take him out of the country to put an end to his influence on the local population subjected to the French authorities.

On 1st December 1916, the rebels tricked Brother Charles into opening the door to the hermitage– which, in the meantime, he had rebuilt as a real fortress to offer people shelter in case of armed attacks. They tied his hands behind his back and forced him to kneel. His home and sanctuary of prayer were ransacked.

The approach of two Arab soldiers on camelback enlisted in the French army interrupted the thievery. The 15-year-old boy who was guarding Charles panicked. He pulled the trigger of his rifle and shot Charles in the head. Charles made no sound. He slowly crumpled to the sandy earth and died.

Brother Charles’ death seemed to fulfill what he had predicted a few years earlier: “Like the wheat in the Gospel, I must rot in the land of the Sahara to prepare the future harvest. Such is my vocation”.

Recently, I was given a unique opportunity to taste some of the bitter hardships endured by fellow human beings fleeing drug-gang violence, oppressive poverty and economic injustice south of the U.S.…