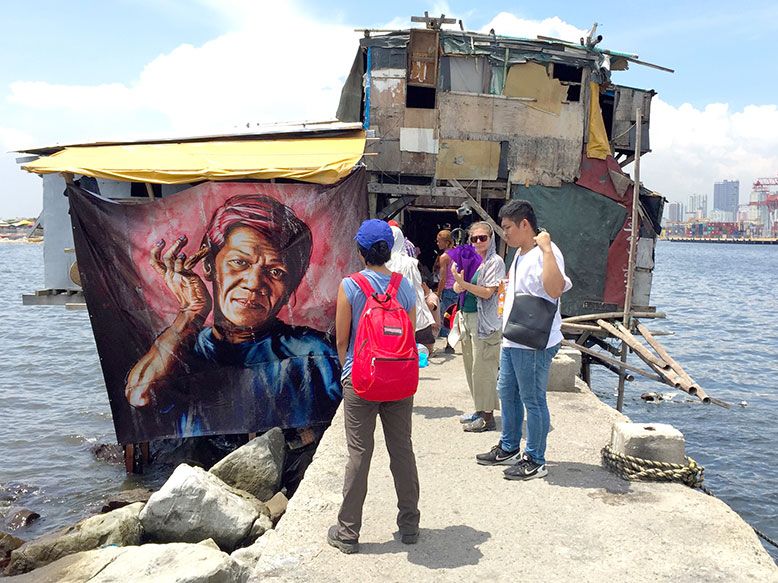 Melbourne-based street artist Kaff-eine found her way to the charcoal-making community in Baseco and the dumpsite in Happyland, Manila, where she collaborated with residents and created artworks using charcoals they make for a living.

Junk is precisely what you see in a dumpsite: garbage, leftovers, scraps, and waste. Even people who live and thrive in the junkyard are seen as dirt and outcasts: the scavengers, beggars, homeless, jobless, and the poor. Hardly anyone will take a second look. But the eyesores that are the dumpsites and slum areas in Tondo, Manila, now look like a gallery hosting an open-air exhibit. With shanties covered with huge tarpaulins featuring realistic portraits of slum dwellers, it will be difficult for any passerby not to stop and stare. There’s beauty to behold amid the trash after all.

“I use charcoal in my art and these residents make charcoal. The idea came to me to sit with them and use the charcoal that they make to create artworks together,” Kaff-eine said about the collaboration that she eventually called “Phoenix.”

“The Phoenix is a mythical, beautiful and powerful bird that rises from the ashes of destruction,” she explained. “And I realized that it works quite literally when I use ash and something beautiful is coming from it. The Phoenix is also a metaphor for the communities of these people who are living among the ashes and charcoal. Their stories, personalities, resilience and creativity are quite beautiful.”

The miserable living conditions in Baseco and Happyland, surprisingly, never deterred the residents’ creativity, talent and hopes. On sketch papers Kaff-eine brought, charcoal-maker Lolita drew a house she dreams of building for her family. Truck loader Ramil sketched the countryside barrio where he was born. Twelve-year-old Jerome illustrated a house, saying he wants to own one someday, while 11-year-old Princess drew a clean version of Tondo, free from malnourished children and drug addicts. Annabel, meanwhile, took to drawing her vision of sending her three grandchildren to school.

After the residents drew things that matter to them, Kaff-eine completed the artworks by combining the residents' charcoal drawings with watercolor portraits. Working on “Phoenix” portraits, Kaff-eine deviated from the usual stylized characters that she paints on the streets. Instead, she painted realistic portraiture of the charcoal makers and garbage pickers. She said the shift is meant to motivate “’Phoenix’ audiences to connect with Baseco and Happyland residents – to see their beauty and humanity, and to honor them myself.”

The completed artworks are “Phoenix’s” final showpiece paintings, which consisted of 10 collaborative works, three solo works from Kaff-eine, and two works in collaboration with Filipino photographer Geloy Concepcion. The artworks were exhibited in Melbourne last November.

According to Kaff-eine, part of the proceeds of the artworks sale will be donated to non-government organizations that are already working in Baseco and Happyland: Bahay Tuluyan, which advocates for street children’s rights, and Gawad Kalinga, which helps improve housing conditions in slum areas. But aside from raising money for the communities, Kaff-eine wanted the artworks and a short film documenting the collaboration to serve as the residents’mouthpiece to reach an international audience.

“I hope people can see these communities the way I see them. What I saw when I first came here was that what these people don’t have in terms of material resources, they have ample in terms of personality, love and creativity,” she said.

“I wish people would look at them with admiration rather than [merely see] them as people who live in dirty situation. They’ve got hope, talent and community. Despite their surroundings, they live happy and positive lives. And I am lucky to be a part of it just for a short time,” Kaff-eine added.

After the successful exhibit at the James Makin Gallery last November, Kaff-eine reunited with the community in January to give residents copies of the "Phoenix" artworks. But seeing no change with the residents’ shattered homes made from scavenged materials, Kaff-eine and her crew decided to extend more help.

“You see old, threadbare tarpaulins used for walls, roofs, or tents everywhere but they are barely in any condition to adequately protect the families who live under them. New tarps are practical for the climate, weather and mobility yet I haven’t seen any new tarps used in the slums and I certainly haven’t seen any tarps with images that reflect the communities’ quirky and diverse characters. Combining new tarps with my portraits of the local personalities will provide shelter and also [serve as] a large open-air exhibition spotlighting and celebrating these unique communities,” she said.

Kaff-eine painted 10 more portraits for a follow-up project she named after “Happyland” and her crew raised funds to print the artworks in huge tarpaulins. “We gifted at least 30 tarps to whoever the communities think need them the most. They can be used as a stand-alone shelter or could reinforce existing residences. We estimate 30 art tarps could shelter at least 120 residents and would make an eye-catching and useful installation,” she added.

The “Happyland” portraits now decorate the slums in Baseco and Happyland. Some of the portraits were displayed prominently within the compound for everyone to see, while some were used as walls or roofs of some of the residents’ makeshift houses.

Kaff-eine may not have found concrete walls to paint in Baseco and Happyland unlike in some parts of the globe where she painted on lanes, railways, and alleys. But her portraits on huge tarpaulins now provide housing reinforcements for slum residents, especially with the upcoming monsoon season. Colorful and realistic, Kaff-eine’s portraits standout from a backdrop of trash and serve as a creative reminder that there’s still hope amid the mountain of rubbish and coals.

Below, Katie shares how “Phoenix” and “Happyland” came about and what she aspires for these impoverished communities in the long run.

Anyone who wants to support Kaff-eine’s work in Manila can contact her crew by e-mailing to happyland2016@gmail.com.

The Church of Mongolia is celebrating its 25th year. Among those who helped establish Catholicism in the country is a Filipino. We got to talk with the Bishop of Mongolia, Wenceslao Selga Padilla and…

The new movie Smaller and Smaller Circles, based on the award-winning novel, highlights the fictional investigative prowess of two Jesuit priests who solved a series of murders in a slum neighborhood…

Her Passion to Communicate Science