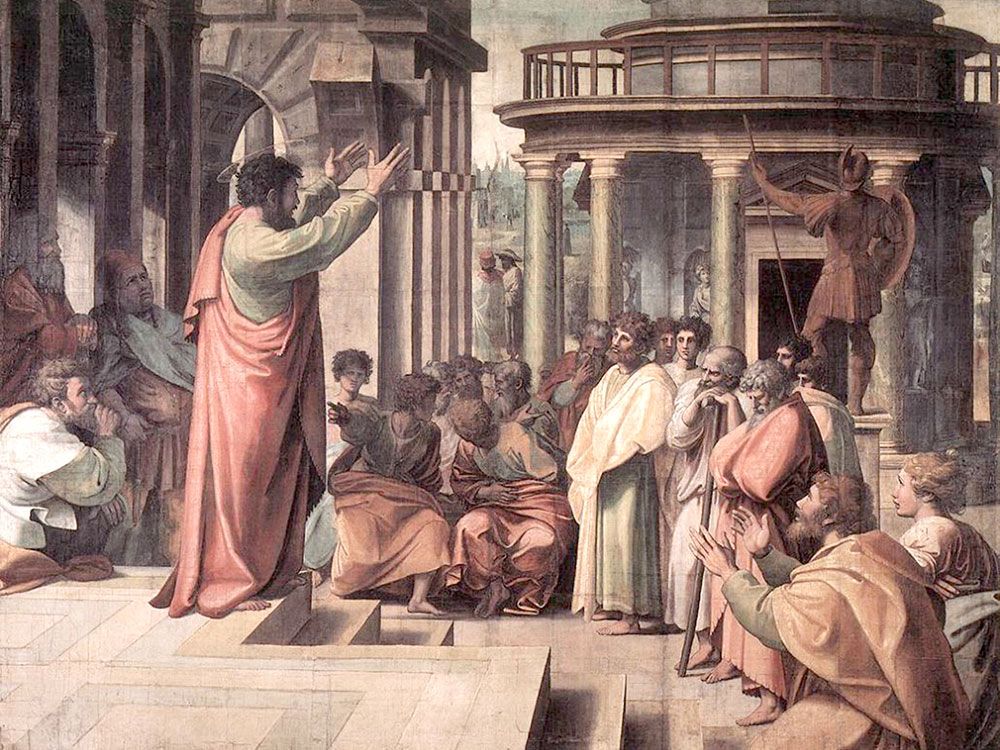 God looking for one man

Saul of Tarsus, “the 13th apostle” Paul, the great herald of the Gospel, the greatest missionary of all times. Someone calculated that Paul covered 20,000 kms. over land and by sea. But his greatness isn’t so much because of the distances covered as the extraordinary nature of his vocation and his work as an apostle.

We have abundant information about Paul, whether it is through the Acts of the Apostles or from his letters. Allow me to recollect some data. Born in Tarsus, in the diaspora, from the tribe of Benjamin, a Roman citizen, he studied Law (Torah) at the school of the famous Rabbi Gamaliel, in Jerusalem, at the beginning of the 30s. There, he got to know the followers of the new “path,” the Nazarene followers, who questioned the centrality of the Torah, substituted by siding with Jesus, considered the Messiah and Savior, dead and resurrected. A fervent defender of the Law, with his youthful ardor (just over twenty years old), Saul quickly became a staunch follower of Jesus’ disciples. He is the privileged witness of the death of Saint Stephen, who he certainly approves of: “It is fitting that only one man dies for the good of the whole nation!”

A vessel by choice

Then something unimaginable happened. On the way to Damascus (Syria), where he was heading to, with the aim of following the Christian community, he was literally blinded by an apparition of Jesus. He became blind, was led by the hand, arrived in Damascus and, for three days, lived his “paschal mystery,” going through a radical transformation in his life. Ananias, an old man in the community, is sent to cure him of his blindness and guide his first steps in the faith. He is the “chosen vessel,” selected by the Lord to be the apostle to the Gentiles (Acts 9:15). Emptied of the “vinegar” of his fanaticism for the Law, his heart will be filled with “honey” from the love of Christ. It was around the year 36.

Barnabas presents the new ardent “proselyte” to the Jerusalem community, dissipating doubts and reticence others had of him. Together, through the revelation of the Spirit, they undertake the first apostolic journey, starting off from the community of Antioch. It is the start of Paul’s great missionary epic which, for almost twenty years, with his group of collaborators, will untiringly cover the strategic centers of the Hellenistic world of the Middle East. In his anguish to take Christ everywhere, he even suggested going to evangelize the Iberian Peninsula. His love for Christ and the Gospel finishes with the supreme testimonial of the martyr, in Rome, around the year 67.

One person makes the difference

It would be difficult for anyone to one day equal the intensity of Paul’s passion for Christ and for the Gospel. The “aborting” of the term apostle, the last of them, that he felt he was unworthy of being called (1 Cor 15:8-10); in reality, he is to become “the first after the Only One” (Benedict XVI). His figure as an apostle and his inspiring words from his letters are a beacon which, throughout the centuries, continues to illuminate the Church.

It is surprising how a person, by his ideas or by his action, can change the course of history, and his influence can continue over centuries – for good or for bad. Examples of history (even recently) are numerous and some are sadly eloquent.

Biblical history, particularly, recalls two unique and opposing figures who have an extraordinary influence over all humanity: Adam and Christ. Paul sets this out eloquently in his letter to the Romans: “It was through one man that sin came into the world, and through sin death, and thus death has spread through the whole human race because everyone has sinned… One man's offence brought condemnation on all humanity” (Romans 5:12.18). But, in the same way, “how much greater an effect the grace of God has had, coming to so many and so plentifully as a free gift through the One Man Jesus Christ…by One Man's obedience are many to be made upright.” (5:15.19).

God works with the unity

Unity comes before multiplicity: “'Let us make man in our own image, in the likeness of ourselves” (Genesis 1:26). The human being is an image of the “entire Trinity” (St. Augustine). In God’s plan, this image of His is a reflection of the profound solidarity and communion that exists within the Trinity. Therefore, St. Augustin highlights the fact that, whilst the animals are subdivided into various species, humanity is one entity. Following this logic, the starting point of God’s action will habitually be the unity to reach the multiplicity and to redirect the unity: “so that they may be one like us” (John 17:11). The objective is that expressed in the Lord’s Prayer: which is, “on earth as it is in heaven.”

In the history of salvation, when God wants to begin something new, a new phase, He chooses one person in particular, on whom He concentrates His action. Through that “agent,” he multiplies His action and brings His grace to the “multitude.” All “responsibility” goes through one human mind which, sometimes in dramatic fashion, is called to “respond” with total trust and availability to God’s plan. For example, we can recall Noah, Abraham, Moses, the prophets, Jesus Christ, the Twelve…It is tremendous to think that the “yes” of a “multitude” is mysteriously a result of the “yes” of an individual. Through him, God’s blessing will last thousands of generations (Exodus 20:6). Like a “no” in a similar way can also influence several generations – hopefully only “down to the third or fourth generation” (Exodus 20:5).

Here lies the fruitfulness of Paul’s vocation! His “yes” continues to be fruitful, a channel for God’s blessing to flow forever, throughout centuries and millennia! The mysterious wisdom of God! Happy be Paul’s “yes” which continues to grow in our “yes” when we receive his testimony!

Looking for “just one person”: me!

Just one individual can make the difference. And what a difference, at times!...God, therefore, tries to touch and win the heart of one person to save his whole life context. Unfortunately, he doesn’t always find him: “I have been looking for someone among them to build a barricade and oppose me in the breach, to defend the country and prevent me from destroying it; but I have found no one” (Ezekiel 22:30). God looks for an upright person to save his brothers but “not one of them is upright, not a single one” (Romans 3:10-12; Psalm 14:1-3). For this reason, he has to send His Son.

“Tell us, Mary: What did you see along the road?" "I saw the tomb of Christ alive, and the glory of the Resurrected. I saw the witnesses of the Angels, I saw the Shroud. Christ has resurrected my…

Call to holiness for everybody

The month of November begins with the solemnity of All Saints, followed by the commemoration of the Faithful Departed. These celebrations invite us to cultivate the “communion of the saints”; to…

We do not have the account of Luke’s vocation but his diaphanous figure, as a disciple and missionary, appears in filigree in his two works: the Gospel and the Acts of the Apostles. A look at Luke’s…