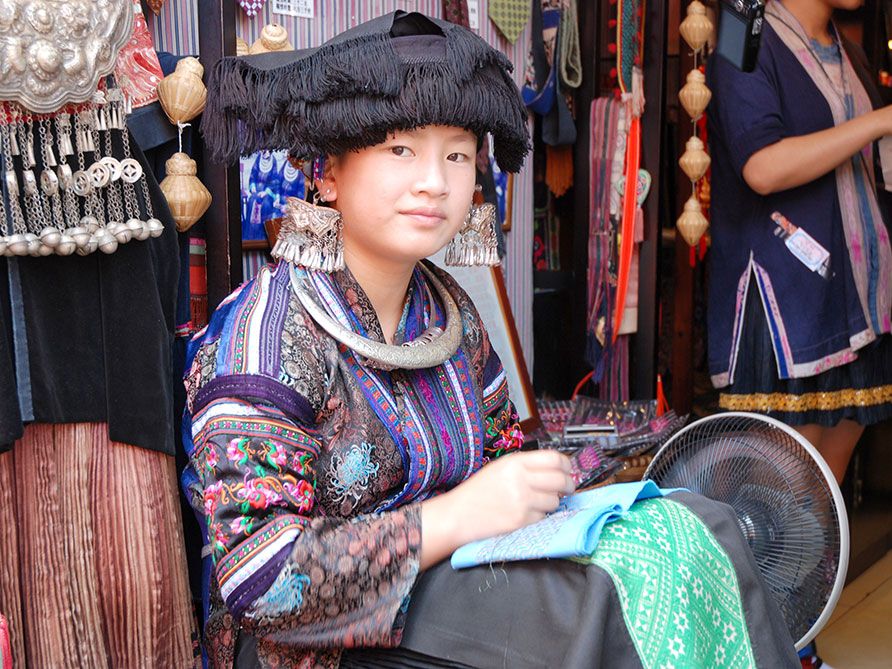 Basha means ‘lush’ in the Miao language. Located on the lower slopes of Moon Hill, the village indeed abounds in bamboo groves and verdant forests. The village consists of five Miao communities that add up to a total population of 2,000. One of the distinctive topknots that the men of Basha wear, their firelocks, and the ancient trees that surround their homes are regarded as the ‘three treasures’ of Basha Village.

Basha men prize their firelocks as precious heirlooms passed down for generations. Generally dressed in dark clothes, a knife in a woven sheath at the waist and rifles slung over the shoulder, Basha men resemble ancient warriors. Basha is the only place in China exempt from the country’s strict prohibition on firearm possession. The government issues special permits to carry their traditional musket-style powder rifles, whose range is limited to 20 meters. The weapons are made locally.

Miao communities in the village live according to the time-honored tradition whereby ‘men till and women weave.’ They subsist on farming and hunting, and the gods of the sun and of trees are their deities. The hanging fish baskets in some homes signify the role that fishing still plays as a food source, in addition to farming and hunting, although less so now than in earlier times.

Basha villagers still live in traditional stilted houses, some of the older ones roofed in tree bark. Luxuriant bamboo groves act as natural borders between clusters of dwellings. The oldest house, its pillars and columns chopped and shaped by axe, is said to have been built 250 years ago. Newly-built houses have relatively modern features, such as glass window panes rather than sliding boards to let the sunlight in but retain the common architectural structure.

The first floors of these stilted residences are used for storage or keeping livestock. The second is generally the living area, and commands a stunning vista of the rooftops below and coils of cooking smoke rising against a backdrop of terraced fields. Villagers sleep on mats on the floor rather than on beds.

Younger people still keep time-honored traditions but also appreciate the comforts of a more modern lifestyle, though to a far lesser degree than city dwellers. Older residents have seen such changes as tiles, rather than piles of tree bark, on roofs that often overlay steel sheets – a modification that protects against storm and gale damage.

The oldest flight of steps in the village consists of hewn tree trunks with wooden railings on either side. The hillside ascending from the road is laced with rows of wooden trestles, five meters tall and four meters wide, on which to dry ears of rice. After a harvest, the hillsides are resplendent in these golden sheaves.

The Basha people have a distinctive style of dress. The men wear short black jackets with round copper buttons that fasten on the left and black straight trousers. Women wear black jackets that fasten down the front with short pleated skirts embellished with colorful batiks and embroideries. Regardless of age or gender, the garments of all Miao residents of Basha are made from an indigo shade of hand-woven fabric resembling watered gauze. It is dyed in the juice of Baphicacanthus cusia leaves. Egg white is added to make it rain-proof, giving it a leathery quality. The fabric sometimes appears to glisten due, perhaps, to being tossed into vats of dye over and over again rather than washed.

Men in Basha go to great pains to maintain their distinctive hairstyle. It is achieved by shaving off all hair, other than that on the top of the head, with a sickle and coiling it into a chignon, or hugun, as it is called in the Miao language. Legend has it that this distinct characteristic is the legacy of Chi You, a mythical warrior from ancient times and ancestor of the Miao ethnic group. By the time they can speak, all Miao boys know that their hugun signifies masculinity and strength. Men consequently wear them for life, and have done so for generations. Those we saw, however, all wore headscarves. We understood that only children taking part in folk performances openly display their hugun.

Locals told us that their lives are carefree, thanks to their ancestors’ wise choice of this resource-rich place laden with trees as a home. As the Basha people worship trees, they do not log them unless absolutely necessary. Besides flourishing forests, Basha is also ample in another local specialty – bamboo – which can be seen everywhere. Many villages are built amid the peaceful surroundings of bamboo groves. When one of us suggested, partly in jest, that we dig up some fresh bamboo shoots to take home, the locals made it clear that this would amount to sacrilege.

We saw in the village the charred remains and ashes of a burnt-down house. It brought home just how susceptible to fire hazards this ancient wooden village is. A single spark could destroy its occupants’ entire cultural legacy. Although the Basha people honor their tribal traditions, this has not prevented their assimilation into modern society. Little by little, they have lost their past, and what the future will bring to Basha people remains to be seen. * www.southworld.net

Serving Patients on the COVID-19 Frontline

Every day amidst the pandemic, health workers all over the world put their lives on the line to serve patients. This is the story of one of these masked heroes.