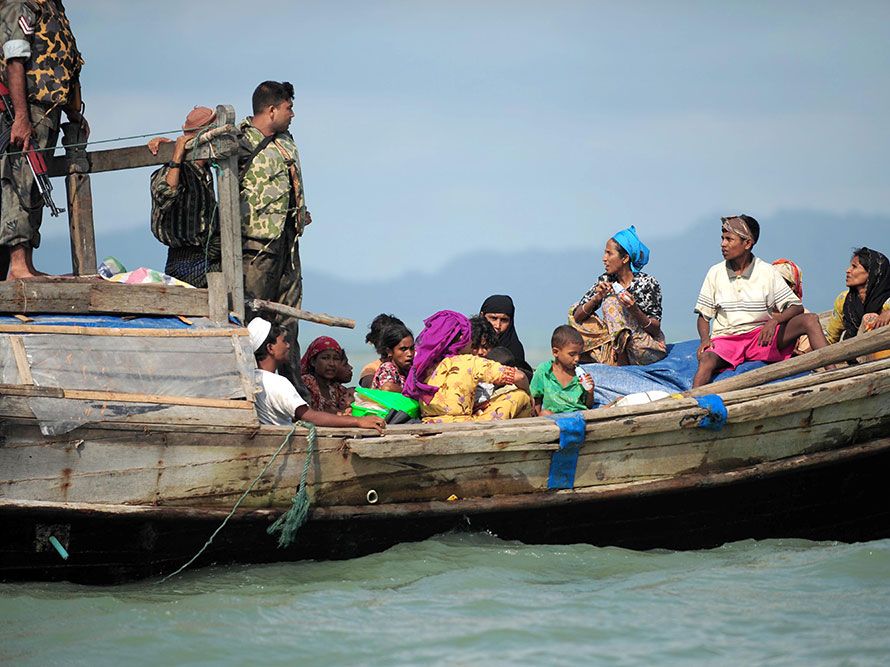 The persisting humanitarian crisis of the Rohingya minority in Myanmar has been a global concern after two bouts of organized mass violence against them in 2012. But the Rohingyas' persecution has been going on for nearly four decades.

Myanmar’s treatment of the Rohingyas is an unmistakable breach of international human rights laws. Successive Burmese military governments have, since early 1970s, viewed the Rohingya Muslim minority, who live on their ancestral borderlands between the Islamic country of Bangladesh and Buddhist Myanmar, as “a threat to Myanmar’s national security and local Buddhist culture.”

The Rohingyas' persecution by the Myanmar military began in 1978 under the pretext of a crackdown on the illegal Bengali immigration into Western Myanmar from the then newly-independent Bangladesh. The military used the Rohingyas as a proxy population against the extremely nationalistic and anti-Myanmar Rakhine people, who resent Myanmar rule as a colonial occupation of their once sovereign nation.

In addition, with the consent and cooperation of the Rohingya community leaders who preferred not to be ruled by the anti-Rohingya Rakhine from the local state capital of Sittwe, Myanmar’s ministry of defence organized a separate administrative district named Mayu – named after the region’s river Mayu – made up of two predominantly Rohingya towns and a web of villages. The new administration was placed under the direct command of the War Office, then in Rangoon. My own late great-uncle, then Major Ant Kywe, was deputy commander of this Mayu administration.

This pro-Rohingya stance shifted when the military leadership purged pragmatic elements from the inner circle within a few years of the military coup in 1962.

Progressively, the country’s strong man, General Ne Win, turned anti-Muslim, xenophobic and erratic to the point where the locals throughout Myanmar would know that the military dictator was in town when they did not hear any amplified calls – five times a day – to Muslim prayers: the military banned any Muslim prayer calls from loudspeakers fitted atop mosques as Ne Win found them disturbing his peace!

With Ne Win’s tilt towards anti-Muslim racism, Myanmar no longer accepted the Rohingyas as historically bicultural, pre-state people of the Western Myanmar borderlands region. Additionally, it was feeling threatened by the emergence of a new populous Muslim nation of Bangladesh in 1973 out of Pakistan’s nine-month-long civil war. As a result, Myanmar’s successive military governments have singled out the Rohingyas as a ‘threat to national security,’ framed them as merely “British-era farm coolies” who were pulled to British Burma’s thriving industrial agriculture.

Accordingly, the country’s military, the backbone of all governments since 1962, has pursued varied and evolving strategies to reduce, remove, replace, relocate, and otherwise, destroy the Rohingyas.

The state’s strategies range from framing the Rohingyas as ‘British colonial era farm coolies’ from the present-day Bangladesh, who came to British Burma only after the 1820s, to painting the impoverished and oppressed Rohingyas as potential Islamists intent on importing terrorism from the Middle East. From formulating and spreading the view of the Rohingyas as aliens to enacting a national citizenship law to strip the Rohingyas of their right of belonging – citizenship – to Myanmar.

Myanmar leaders have vehemently rejected the claim that the Rohingya sare natives of Myanmar. In July 2013, before a VIP audience at Chatham House in London, the visiting Myanmar President Thein Sein asserted that “we do not have a term ‘Rohingya,” an assertion Myanmar’s most powerful general Min Aung Hlaing repeated to the Washington Post in the fall of 2015, adding “they are descendants of colonial-era farm coolies from Bangladesh.”

Myanmar’s official denial and popular rejection of the Rohingyas as one of the country’s indigenous peoples collapses under the weight of historical and official documentation. Pioneering historical studies by G.H. Luce and Than Tun, as well as ethno-linguistic studies carried out by some British East India Company staff dating back to the 1780s, firmly establish the integral presence of the Rohingyas as a distinctly Muslim population of the then Arakan kingdom.

In the last several years, a growing international consensus is emerging as to the nature of the crime: Human Rights Watch has described the persecution of the Rohingyas as ‘ethnic cleansing’ while several major empirical studies published by the University of Washington Law School, Yale University Law Clinic, Queen Mary University of London International State Crime Initiative and Al Jazeera English Investigative Unit have accused Myanmar’s military government of commissioning the crime of genocide and other crimes against humanity.

Virtually, every iconic leader in the world – from His Holiness the Dalai Lama and Pope Francis to Desmond Tutu and George Soros to the youngest Nobel Peace Laureate Malala Yusufzai – has called for the end of Rohingyas' persecution and restoration of their full citizenship rights.

Both Myanmar military leaders and the democratic leader Aung San Suu Kyi have publicly refused to heed these calls while dismissing any accusation of Myanmar committing an international state crime against the Rohingyas as “baseless” or “exaggerations.”

The predominantly Buddhist public in Myanmar is overwhelmingly anti-Rohingya, thanks to the decades of sustained state propaganda against this minority; Myanmar’s ugly religious bigotry echoes the frighteningly Nazi-like attitude and views towards this persecuted Muslim minority while the country’s Citizenship Act of 1982 resembles Nuremberg Laws which de-Germanize the Jews and stripped them of citizenship rights and protection.

Whether one names Myanmar’s anti-Rohingya policies and practices ‘crimes against humanity’ or ‘genocide’ depends on the level of one’s pragmatism. But what is clear is Myanmar’s humanitarian crisis, as experienced by the Rohingyas, is not an internal affair of a sovereign member state of the U.N. Nor is it the outcome of the sectarian Buddhist-Muslim conflict rooted in historical grievances and animosities and unleashed by the country’s democratization process.

It is, in fact, an act of international atrocity crime committed by Myanmar, a U.N. member state. As such, only the discourse of punitive action and international non-military intervention has the real potential to bring an end to this humanitarian crisis. *www.ipsnews.net

The worsening economic and political situation, the Church’s resistance to dictatorship, the growing capacity of the underground and mass movements and the assassination of opposition Senator Benigno…

Five Tips For A Better Kind Of Politics

Here are five “musts” from Pope Francis that are essential for a better kind of politics in both our Church and society.