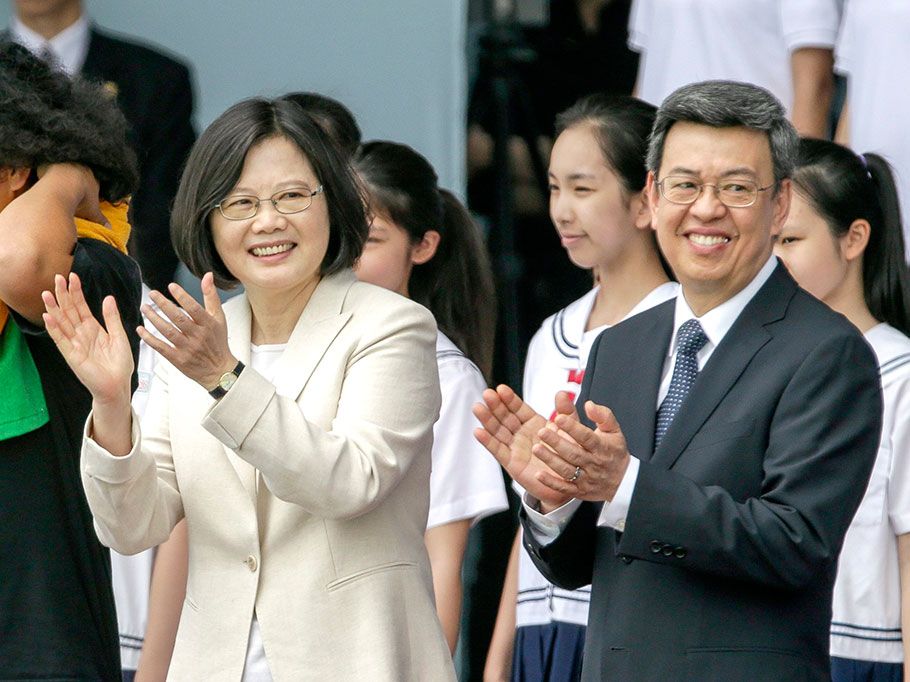 The “Great China” is made up of four political autonomous realities: the People’s Republic (with Beijing as capital city); Hong Kong; Macau and Taiwan (with Taipei as capital city). Only the last one, between difficulties and enormous challenges, has managed to free itself from a violent colonial past, and reach freedom and democracy. It is a mature, vivacious democracy which must withstand Beijing’s pressure and at last can see the regular alternating of the two main parties of government. In a culture like the Chinese that traditionally has left women in a secondary role, Taiwan is now ruled, for the first time, by a woman, Tsai Ing-wen.

Tsai, 59 years of age, was chosen in a kind of plebiscite by her co-citizens, last January 16, neatly defeating the opponent of the Nationalist Party which had ruled the island from 1949 (with a break from 2000 to 2008). The Democratic Progress Party, whose leader is Tsai, has for the first time conquered the majority of seats in Parliament.

Tsai Ing-wen is truly an able woman. She comes from the South of the island which can be considered the fortress of the “independent tendency.” Last of eleven children, she has acquired an international formation in Great Britain and USA. Defeated by a small margin in 2012, she has shown humility and strength not to give up. Although deprived of an evident oratorical charisma, she knows how to gain consensus with her sincerity and honesty.

She is not married and although she is not the first woman in politics in Asia, she is the first who doesn’t come from a powerful family dynasty. She is mother, daughter, sister, niece of nobody: she is a self-made woman: she has built herself up with her own merits and strength, just as the island that she now represents.

Tsai has chosen as Vice-President another person who comes, like herself, from the deep South, from a modest and large family, and has made his way because of his merits: Chen Chien-jen, an epidemiology researcher of international reputation from the prestigious Chinese Academy. Because of his fiancée’s influence, he has converted to Catholicism as an adult. Father of two daughters, he is, at present, actively committed to the great Jesuit parish of the Holy Family of Taipei.

He draws inspiration from Pope Francis whose biography he has contributed to translate into Chinese. He thinks of himself as a pinch of salt in God’s hands in order to give taste to his homeland and contribute to its welfare. Vice-President Chen wishes to share with China and the rest of the world, the joy of freedom and democracy. The world, says Chen, is in need of peace; and so are Taiwan and China.

But will Beijing accept to dialogue with Tsai, recognizing the will of the people of Taiwan? Or will it , in any way, try to boycott her success in the name of the nationalistic ideology according to which “only one China exists, and Taiwan is part of it?”

The “strait of Taiwan” is considered a dangerous point of tension for the Pacific Asia and for the whole world. There exists between the two parties a “1992 Treaty,” on the basis of which China and Taiwan sustain that there exists a “one and only China.” This doesn’t mean that both of them understand it in the same way.

During the Nineties, tension reached very high levels, because of China’s military maneuvers. Even today, China has thousands of missiles aimed at Taiwan, enough to destroy the island. In 2005, China approved a tough anti-secession law which authorizes war against Taiwan in three eventualities: if the island proclaims independence; if its independence appears inevitable; if a peaceful reunion appears impossible.

Last November, the leaders of Taiwan and China met in Singapore for the first time since the creation of the People’s Republic of China (October 1, 1949). To represent Taiwan, there was naturally the then President Ma Ying-geou, liked by Beijing, who had an encounter with the counter-part Xi Jiping which was more symbolic than substantial. The latter spoke of the independence of Taiwan as nothing more than “the greatest threat to peace.”

Another “minefield” is that of the relationship with the Holy See. It is difficult to say if the ascent of Taiwan's new leaders – with a Vice President being the spearhead of the Catholic laity – will influence, in a positive way, the relationships with the Vatican. For many years, the Taiwan question, where the Vatican Embassy is entrusted to a mere “Chargé-d’Affaires,” was waved like a pretext by Beijing as the main obstacle against an agreement between the Vatican and China. In reality, the main difficulties concern the freedom for the Church and the process of nominating the bishops.

Today, the new leadership is closer to the Catholic sensitivity but it is looked upon with hostility by Beijing which fears that the aspiration to freedom and democracy might touch also China. In fact, the present President Xi Jinping has started a tough campaign against the contamination of “western values,” such as freedom, human rights and democracy. On the other hand, however, Beijing could be interested in an agreement with the Holy See in order to weaken Taiwan, taking away from it the diplomatic relations with the Vatican.

But is it fair to consider Taiwan only in reference to the still unresolved political conflict with China? The Taiwanese democracy, on the political, cultural level and even in the field of sports, is victim of a severe international isolation imposed by Beijing. After centuries of various foreign military occupations, Taiwan is still coerced to isolation, kept hostage of the Chinese nationalism ideology, so strong that it manages to stop the whole world from holding any calm discussion about Taiwan’s reality and identity.

Taiwan, however, is not only a strategic pawn in the Chinese chessboard. It is a great civil and democratic reality that respects human rights and religious freedom. With its own strength, Taiwan has open a way and a hope for the Chinese nation, whereas the two zones with special administration, Hong Kong and Macau, do not represent any more any hope. Macau which historically had a fundamental role in the evangelization of Eastern Asia is now a small city, monopolized by Chinese and international gambling capital. The civil conscience is as under anesthesia and even the Catholic Church is under its influence.

Hong Kong, instead, has a strong public opinion that has greatly exposed itself in the manifestations of the so -called “Umbrellas Revolution.” But China has decided to “take back” Hong Kong at any cost. The program “one country-two systems” had to last at least fifty years, but it is already dead, after only 18 years. The story of the five Hong Kong editors who have disappeared into thin air during the last months – as it usually happens in the worst fascist and communist military regimes – marked somehow a point of no return.

The editors were printing and selling books which were critical of the Chinese Communist Party. Those books were like hot cakes for the tourists from mainland China visiting to Hong Kong. Moreover, those editors were preparing a book which was expected to be bitterly critical of President Xi Jingpin.

The seizure of the editors is an instance of what the people of Hong Kong may be afraid of: to disappear into the void, by the hands of Chinese agents. The population has always experienced security in the city of Hong Kong. Now, after the Chinese agents are acting with impunity, they no more feel so. Those who have exposed themselves are afraid. Hong Kong is becoming a conformist cultural desert. Only the friends of Beijing affirm themselves in the places of power, in the media, in education and in politics.

The respect for human rights and religious freedom is also dramatically stepping backward in China. The repression against journalists, human rights lawyers and any other person who is criticizing the regime is going on. From 2009, about 150 Tibetan faithful have set themselves on fire in order to protest against the oppressive policy in Tibet. In the same way, the Uiguren population of western China is violently subdued.

Christians also suffer. A campaign, which by now has lasted more than two years, has brought to the demolition of more than one thousand crosses and numerous churches. Above all, there is the sad and troubling case of Yu Heping, a young and brave priest belonging to the underground Church, who was found dead in suspicious circumstances on November 7, 2015.

There is the conviction on the part of many that it is a violent death caused by his influential activity among the young and in the internet. Many faithful consider him a martyr. Behold why, in this scenario, Taiwan’s democracy and the personal histories of Tsai Ying-wen and Chen Chien-jen have a prophetic significance and are a beacon of hope for the whole Chinese nation. * Text first published in Mondo e Missione

The amazing growth of the Christian community in Northeast India took the older Churches in the country by surprise as the second millennium drew to a close. While the Church in South India traced its…

The beatification of 17 new martyrs, in the Laotian capital, was a historic event for a tiny minority Church in a country ruled by a communist regime. For the good of the people of Laos, Church…