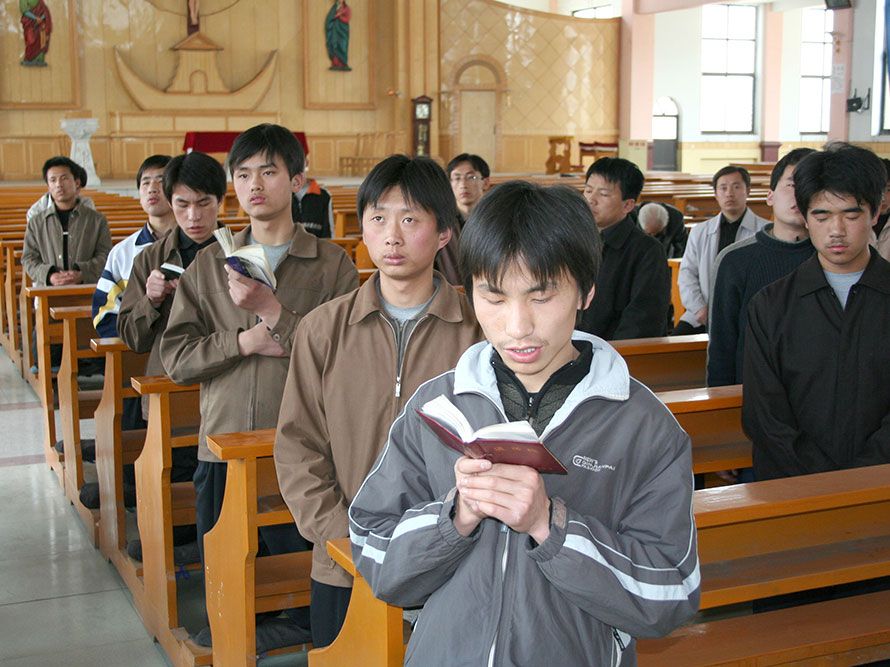 VATICAN – CHINA RELATIONS: Only Francis Can Go To China?

Cardinal Pietro Parolin, Secretary of State of the Holy See, recently told an Italian journal that relations between the Vatican and the People’s Republic of China “are living in a positive phase, as there have been signals from both sides that there is a wish to keep on talking in order to find together solutions to the problems of the presence of the Catholic Church in that huge country.”

The language was flowery-diplomatic, but the message seemed clear: discussions were proceeding with regard to the establishment of diplomatic relations between the Vatican and Beijing. Which is curious, in that the P.R.C. isn’t getting on very well with just about anyone else these days. Its saber-rattling in the South China Sea has got Vietnam and the Philippines nervous. Anti-Japanese propaganda from Beijing sources has been ratcheted up. Indian efforts to improve relations with China have gone essentially nowhere.

Then there is that new law being pushed by President Xi Jinping which would drastically hinder the work of Chinese non-governmental organizations and foreign human rights and pro-democracy agencies trying to aid their compatriots in China. And, as if all that weren’t enough, President Xi’s regime has been cracking down on dissidents, including Christians who don’t kowtow to the party-regime’s demand to control everything that looks like civil society.

So why, one wonders, is the same P.R.C. government, that’s becoming ever more menacing abroad and repressive at home, getting along rather well with the Holy See, such that relations are “in a positive phase”?

It’s well known that Pope Francis would like to go to China, and so far as the papal diplomats are concerned, it’s inconceivable that such a visit could take place without diplomatic relations being established between the Holy See and the P.R.C.

Yes, a papal visit to a country that doesn’t have an Apostolic Nuncio would be logistically more difficult; but since when did Peter’s mission to strengthen the brethren (Luke 22.32) depend on formal diplomatic relations? Paul VI went to the United States, Jordan, and Israel years before the Holy See had diplomatic relations with those countries. Surely, Pope Francis, whose disregard for precedents and procedures is part of his appeal to many, isn’t going to be constrained by what his diplomats regard as the proprieties – although he might be blocked by the P.R.C. which would clearly use diplomatic relations as a bargaining chip in negotiations for any papal visit.

This passion among Vatican diplomats for getting a deal done with the P.R.C. has always puzzled me. It would almost certainly mean severing diplomatic relations with the Republic of China in Taiwan, the first democracy in Chinese history. If Taiwan is thrown over the side for the sake of a deal with Beijing, what signal does that send to the world, and to Chinese democrats and human-rights activists on the mainland – including Christians – about the Catholic Church’s commitment to free societies? Moreover, one can’t draw a lot of satisfaction from recent Vatican attempts to get along by going along with dictators and authoritarians. Being nice to the brothers Castro has done nothing for a human-rights situation in Cuba that has actually gotten worse.

My bottom-line concern here is for the Church’s evangelical future in China, not for diplomacy. If the Holy See makes a deal that seems to abandon Chinese democrats in Taiwan, while seeming to turn a blind eye to the intensifying pressures on civil-society institutions (including churches) in the mainland, the Church’s evangelical mission is going to be seriously damaged, now and in the future. And at what price? The price of a place at the diplomatic table with one of the most authoritarian regimes in the world which is currently perfecting methods of political and social control beyond the dreams of Chairman Mao?

Catholic bishops have welcomed an "indefinite ceasefire" declared by communist rebels following the first round of talks aimed at ending almost half-a-century of Maoist rebellion in the Philippines.