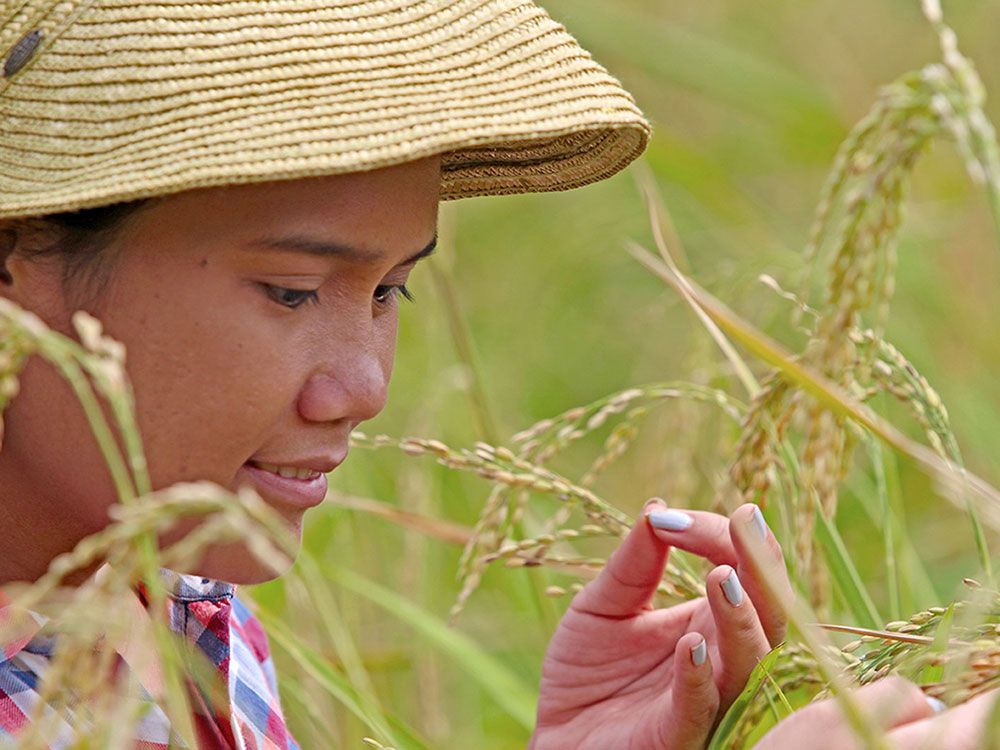 Reaping what she sowed

Having inherited the enthusiasm for farming from her late father, Cherrie Atilano has the welfare of farmers at heart. Social entrepreneur and recipient of several awards, her enterprise teaches farmers new rice-growing techniques, empowers women and educates children and youth on gardening.

When her father died, when she was just three years old, he had a wish and that was for his children to continue his work, especially for the farmers’ welfare – as people rely on farmers so that they may have food on their table. Her father was overseer of a sugarcane farm in Negros Occidental.

Cherrie Atilano, one of the recipients of last year’s The Outstanding Women in the Nation’s Service (TOWNS) award, took her father’s wish to heart. It eventually became a passion and a mission.

Biking around the farm where she spent her childhood, she realized something important. “I observed, at a very young age, from my exposure to the farming community that if you are poor and you are a Filipino farmer, 100% of your income goes to food. This is the reason why farmers couldn’t afford to live in decent homes and to send their children to school,” she explained.  “Thus, the vicious cycle of poverty continues. “

Early start
As early as the age of 12, Cherrie’s enthusiasm for farming and teaching was evident. “I began teaching farmers how to plant vegetables around their house after I read a book about bio-intensive gardening,” she said.

This further intensified her passion for farming and advocacy to promote global food security and sustainable agriculture programs. She elaborated: “I dreamt of helping them by being a social entrepreneur so that I can help the farmers to dream bigger beyond themselves, to put decent food on the table of their families, and also to be able to send their children to school.”

Armed with a degree in agriculture, major in horticulture, Atilano worked for real estate giant Ayala Land Inc. as a landscape horticulturist. Later on, she became involved with nonprofit organization, Gawad Kalinga (GK). It was during this period that her dreams for social enterprise became a reality as she set up Agricool which, at that time, became part of GK. In her hopes to continue educating others on sustainable agricultural practices, she had to give up a Fulbright Scholarship, a chance to study abroad.

Agricultural program
As they say, you reap what you sow, and her sacrifice to withdraw from this prestigious scholarship will not go unrewarded. In November of 2015, Atilano launched what is probably her proudest program yet, and that is AGREA Agricultural System International, Inc. “AGREA is the result of my life-long interactions with marginalized farmers,” she shared.

AGREA’s work is currently focused on the island province of Marinduque. The province relies heavily on agriculture, primarily on growing rice and coconuts. Atilano revealed: “I envision transforming the island into a “One Island Economy” completely sustainable on its indigenous produce founded on Zero Hunger (social well-being), Zero Waste (environment sensitive) and Zero Insufficiency (economic development).”

In the year that AGREA has been working in the agricultural province of Marinduque, it can already be deemed successful with Atilano’s vision slowly coming true. More and more farmers are starting to employ the teachings of Atilano and her group.

She told us: “Right now, we have 30 rice farmer leaders who also serve as skilled trainers to expand and propel the work of AGREA to 1,000 rice farmers in the island to make 4,000 hectares of land sustainably productive in the next five years.”

New techniques
One technique that AGREA seeks for the local farmers to utilize is the System of Rice Intensification (SRI).  SRI is a labor intensive yet low water technique making it perfect for a tropical country such as the Philippines. According to Atilano, “it has helped farmers increase their yields by fourfolds and decreased their farm inputs cost to 70%.”

Apart from teaching new techniques in farming, AGREA also helps the farmers by ensuring good returns. The founding farmer shared: “Once the crop is harvested, the enterprise buys the crop at just the market price to ensure good profit for the farmers, putting a stop to the age-old exploitation of farmers by the traders.”

She continued, “the collected rice is then sold in the market at the market price and the profit is reinvested for the growth of the enterprise. Interestingly, AGREA buys the produce after stipulating enough produce for the farmer’s consumption for the entire year so that their families do not stay unfed. We put a strong mandate on their business aspect that putting food on their farming family’s table must be first before anything else. Thus, a lot of farmers are enrolling in the process.”

It is not only the farmers who Atilano works with. Her foundation also works with the women in the communities in multiple ways such as providing them training in financial literacy and setting up their own small businesses such as bag weaving and product processing.

Educating the young
More importantly, Atilano sought to educate the young ones with regard to agriculture. AGREA partnered with the Department of Education to teach children in a practical training activity called “The Garden Classroom Program.” They have 18 pilot school gardens now around the island of Marinduque. The goal is to establish 183 garden classrooms around the island and to save 50,000 pupils from malnutrition.

Atilano shared: “Within the program, children tend school gardens and grow vegetables and fruits. This produce is used in the school meals for the children or they bring the extra produce home to inspire their parents to have a backyard organic garden as well – influencing the schools to households to community.”

Expansion plans
With plans of selling and sending out rice to the country’s capital, Manila, AGREA also plans to expand. The expansion includes the field of fisheries and what Atilano said as “going beyond supplying raw materials, that is producing indigenous farm products as well as processing for value-addition to provide livelihood to women.”

Now, AGREA is branching into coconut farming. The current products of their program of going beyond copra are virgin coconut oil and coco sugar. In fact, Atilano disclosed that “we are launching a partnership with Bo’s Coffee, a locally-owned Filipino chain of coffee shops, to use the coco sugar product in all their branches in the Philippines.”

Atilano’s mother taught her that “the shortest distance in life is the distance between your heart and your brain and, if you do not know how to connect that distance, you better forget about life.” This is exactly what she is doing as she continues her father’s wish and legacy by educating those around her about her passions.

50 years after Ferdinand Marcos Sr. made himself a dictator by declaring Martial Law, his only son was formally inaugurated as the 17th President of the Philippines, after 31 million-plus Filipinos…