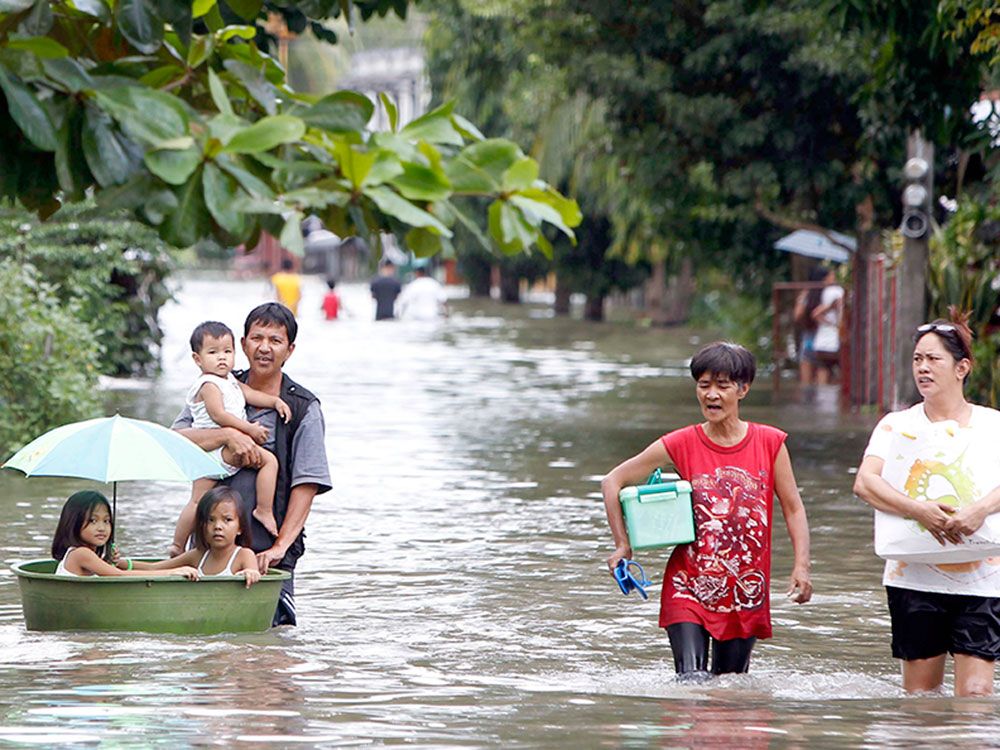 Constant flooding happening in major cities, like Davao and Manila, is due to sea level rising above average. The phenomenon intensifies storm surges resulting in more intense typhoons. Coastal areas bear the brunt of these adverse factors caused by climate change.

When the Pangi River in Davao City swelled to new heights in June 2011, 29 people lost their lives and 50,000 residents had to flee their homes.  In an editorial, the local daily Sun Star Davao commented: ‘‘The rapid urban development has caused encroachment into the city drainage, preventing the water from seeping into the soil with all the construction in the heart of downtown Davao.”

But those are only part of the problem. Former Press Secretary Jesus G. Dureza, who is now back in the government as chief negotiator for peace process, believes that the constant flooding happening in Davao City is due to sea level rise. “My calculation is that (the sea level) has risen by one foot over a period of 20 years,” he wrote in his column, "Advocacy Mindanao." “Hence, rain waters and floods no longer easily flow or empty out into the sea. They are clogged in the waterways and spill out into the riverbanks.”

Sea level rise
Sea level rise within this century will affect a larger percentage of the Philippine coastline compared with that of other developing countries of Asia and the Pacific region, according to a World Bank report. “By the end of this century, sea levels in the region are expected to rise by about 125 centimeters, exceeding the global average by 10-15%,” noted the bank report, Getting a Grip on Climate Change in the Philippines.

“Even assuming the sea level in the region rises at the global average rate of about 100 centimeters, about 14% of the Philippines’ total population and 42% of its total coastal population will be affected by intensifying storm surges resulting from more intense typhoons.”

“In the Philippines, the impacts of storm surges, associated with sea level rise and more intense storms, are particularly significant in terms of the percentage of affected coastal land area, population, and gross domestic product,” the bank report claimed.

The rise of sea levels is just one of the most certain outcomes of climate change. “A continuing rise in average global sea level would inundate parts of many heavily-populated river deltas and the cities on them, making them unhabitable, and would destroy many beaches around the world,” the Intergovernmental Panel on Climate Change (IPCC) said.

A study conducted by the Philippine Country Study to Address Climate Change some years back showed that the Manila Bay is already subjected to several hazards, including flooding and storm surges.

Greenhouse effect
The greenhouse effect is a natural warming process. During the Climate Change Media Workshop two years ago in Davao City, Dr. Perez said that carbon dioxide and certain other gases are always present in the atmosphere. These gases create a warming effect that has some similarity to the warming inside a greenhouse, hence the name “greenhouse effect.”

According to Dr. Perez, human activities that emit additional greenhouse gases to the atmosphere increase the amount of heat that gets absorbed before escaping to space, thus enhancing the greenhouse effect and amplifying the warming of the earth.

“Although the Earth’s climate has changed many times throughout its history, the rapid warming seen today cannot be explained by natural processes alone,” points out Dr. Perez who has a PhD in Meteorology from the University of the Philippines.

“Climate change is very simple,” noted Dr. Robert Watson, IPCC Chairman.  “We are increasing emissions of greenhouse gases and thus their concentrations in the atmosphere are going up.  As these concentrations increase, the temperature of the earth rises.”

“Our lifestyle has led to the accumulation of greenhouse gases in the atmosphere,” notes the fact sheet circulated during the workshop mentioned earlier.  “These gases trap heat from the sun, making the earth warmer. Manifestations of a warmer world include rising mean temperatures, sea level rise and increase in the frequency and intensity of extreme weather events like droughts and greater rainfall.”

In an article published by Rappler, Renee Juliene Karunungan wrote: “We also cannot wait for the rest of the world to act before we start acting ourselves. Yes, developed countries will need to commit more, and yes, the Philippines only emits a small amount of carbon in the atmosphere. But we are a country vulnerable to climate change impacts that have already claimed thousands upon thousands of lives and livelihoods.

Karunungan, the program manager for advocacy Dakila, a group of artists working for social transformation, further wrote: “Climate change is here, happening right now. It is our moral imperative to do our share of climate action. We cannot continue investing in dirty energy. We cannot say climate change does not have to be discussed. We need to discuss it and we need to discuss what we plan to do with it.”

A Journey through the Nativity

In recent history, a few committed citizens contributed a great deal to the cause of peace. They are inspiring examples to the world. The memories of their prophetic personalities should remain alive…