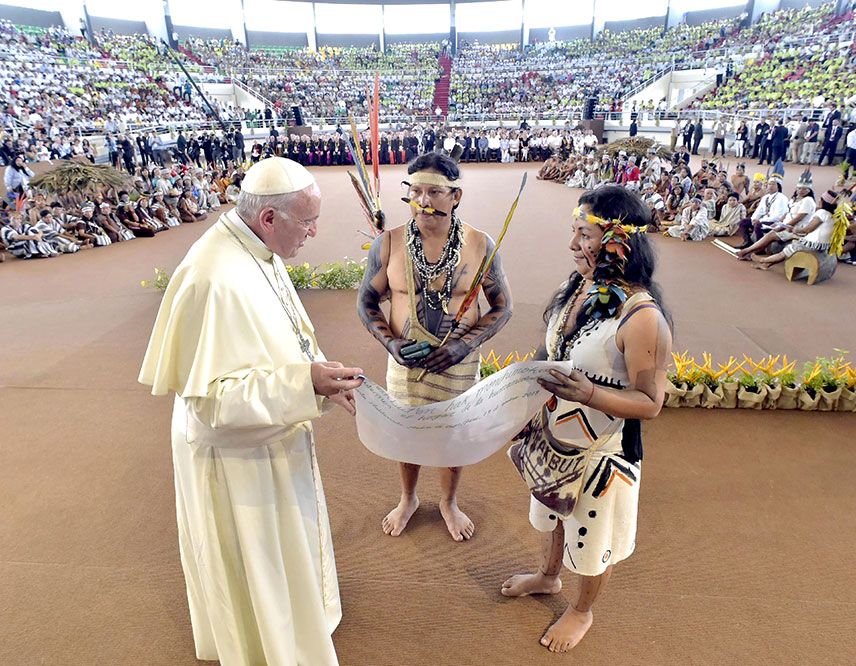 The type of development being applied in Amazonia is having devastating effects, says Cardinal Claudio Humes - president of the commission for Amazonia of the Brazilian Conference of Bishops. The prelate explains how the local Churches are preparing for the Synod of Bishops for Amazonia which will be celebrated in October 2019.

How is the Catholic Church in Brazil preparing for the special synod of Bishops for Amazonia?
The news of the decision taken by Pope Francis to convoke a special Synod for Amazonia filled the Catholics of Brazil with rejoicing and gratitude especially those living in Amazonia. This enthusiastic response on our part was the first step in preparations for the Synod. The Catholic Bishops’ Conference of Brazil (CNBB) has a Commission for Amazonia, and CELAM (Episcopal Commission for Latin America and Caribbean) hosts the office of the Pan-Amazon Ecclesial Network (REPAM). Clearly this body, together with the dioceses and the other ecclesiastic jurisdictions in Amazonia, are more directly charged with the preparations for the Synod. There is a flourishing of meetings in the region. Undoubtedly the Pope’s visit to Puerto Maldonado in the Peruvian Amazon on January 19 and his meeting with hundreds of indigenous people and with bishops representing the nine Pan Amazon countries gave these preparations a strong initial impulse.

What will be the role of the laity?
This will be a Synod of Bishops, but the entire Church, clergy, religious and laity are always invited to participate in preparations for a Synod. For each Synod the General Secretariat of the Synod of Bishops in the Vatican produces a detailed questionnaire on the chosen theme and sends it out to the local communities. Besides the bishops, communities as a whole are encouraged to formulate answers. This first and most important part of preparations is open to all the laity. Furthermore, the list of Synod participants always includes, besides the Bishops, priests, religious, lay men and women whom the Pope invites as auditors; they have the right to take part in discussions but not to vote (voting is confined to the Synod Fathers only). This will be the case also for the Synod assembly in question. The Pope will certainly invite indigenous representatives, men and women, to be present as auditors. During the preparations, in particular by means of the questionnaire, we aim to make sure that as many indigenous as possible have access to the document and in this way express their opinions and put forward suggestions.

Which problems concern you most regarding Amazonia?
During the 2013 World Youth Day in Rio de Janeiro, in an address to the Brazilian Bishops, Pope Francis said that the Church in Amazonia must assume “an Amazonian face”, have “a native clergy”, and in this regard he urged the Bishops: “On this point I beg you, please, be courageous, dare to dare!” At the same time he underlined that “Amazonia is a decisive test, a test-bench for the Church in Brazil and for the whole Brazilian society”. He emphasized that “from the outset, the Church has been present in Amazonia with missionaries, religious congregations, priests, laity and bishops, and she continues to be present and determinant for the future of the region.” In the same address he spoke also of the risk of nature in Amazonia being degraded and devastated, “launching a firm call for respect and protection of the whole of creation which God entrusted to mankind, not to ruthlessly exploit, but to transform into a garden”. These are the most concerning questions in Amazonia. Of course the Church’s missionary and evangelizing presence goes hand in hand with her concern for the environment in Amazonia, as it is so well explained in the Encyclical Laudato Si. When the Pope announced the Synod he said the purpose was to “find new ways” to tackle all the different issues, missionary and socio-environmental, of Amazonia. Certainly a most concerning issue regarding missionary work is the scarcity of missionaries, men and women, which makes it difficult for the Church to be close to the poorest and most isolated Amazonians. Besides this, the scarcity of priests means that the people who live deep in the forest are deprived of the sacraments of the daily life of Catholics, the Eucharist, sacramental confession and the anointing of the sick. This renders them fragile and makes them feel abandoned. What can be done to have sufficient local and indigenous clergy for this mission? This would render even more possible the inculturation of the Christian faith in the cultures of these peoples.

Will the Synod succeed in shedding light on the difficulties in Pan-Amazonia?
Certainly. Faced with important matters such as “finding new ways for evangelization,” knowing she can rely on the support of the Synod, the Church will draw courage to identify these paths.

How can the Church help in the face of development projects in Amazonia (timber plantations, hydroelectric power stations, large scale mineral mining) which go against these people’s traditional life-style?
In fact, the type of development being applied in Amazonia by governments, large public enterprises and private companies, in keeping with the new world economic-financial system, will be highly devastating for the environment and for the native peoples and traditions in this region. The Church can and must take part in discussion on these matters starting from the point of view of the Gospel, in solidarity with so many individuals and communities affected and ignored, despoiled of their dignity and their land, their cultures and their rights, and to defend “our common home”, which will depend on whether Amazonia is protected. To mention deforestation alone, today we are aware that a forest can produce much more wealth than a deforested region.

In answer to Pope Francis’ call for an “out-going” Church, how do you think these local Churches can be effective?
First of all, by participating fully in the preparations for the Synod making known their views and ideas for mission in Amazonia. Then, responding with joy and ardor to the Pope’s guidelines on the basis of the Synod findings. This will mean not fearing what is new, not standing still in time and space, instead with vigor, the vigor of the Spirit, rolling up our sleeves and starting out decisively for the peripheries to announce there the Gospel “with new missionary ardor, with new methods, new means” (John Paul II) and with mercy.

Could you, please, explain the role of REPAM, the Pan-Amazon Ecclesial Network which you preside.
REPAM was instituted in 2014 in Brasilia, during a meeting of bishops and other leading figures of this pan amazon region. It was the result of many meetings and initiatives to develop pastoral care for the whole of the area. It has four founding entities: Justice and Solidary Department of the Episcopal Council of Latin America and the Caribbean (CELAM), Episcopal Commission for the Amazon of the Brazilian Bishops Conference (CNBB), the Latin American Conference of Religious (CLAR) and the Secretariat of Latin American and Caribbean (SELACC). As a network, REPAM aims to contribute to the articulation of the Church’s dioceses, prelatures, vicariates, missions, together with the organization of the local communities, indigenous communities, fishing villages, quilombolas communities (rural cooperative villages of descendants of Afro-Brazilian slaves) in particular the poorest, most neglected and isolated communities, as well as initiatives and programs for evangelization and environment protection in Amazonia. REPAM aims to build up the network, to make it work as it should. In this way communities most immersed in the center of the Pan Amazon territory will feel less lonely and isolated, less alone in this immense forest. Make them less alone with their projects, their dreams and their difficulties and they will know they are all united in a network of solidarity and communion. In order to function well REPAM works in four areas by means of specific working committees: indigenous peoples, human rights, pastoral formation and methods, communications, mapping the pan amazon reality; frontier Churches, new models of development, climate change, international agencies and cooperation. This way of networking along specific lines made it possible to embrace to some extent this gigantic Pan Amazon reality. I think I can say that REPAM today is lively, dynamic and active over the whole territory.

This interview was first published in Agenzia Fides.

From October 31 to November 2, Mexican popular culture represents death with humor and affability. According to Aztec ancestral traditions mixed with Christianity, in these days the ancestors return…

The sexual abuse of children is everywhere, in institutions, in schools, gyms and in the church. The good news is that abusers are being caught, sentenced, and jailed at an ever-increasing rate. It is…