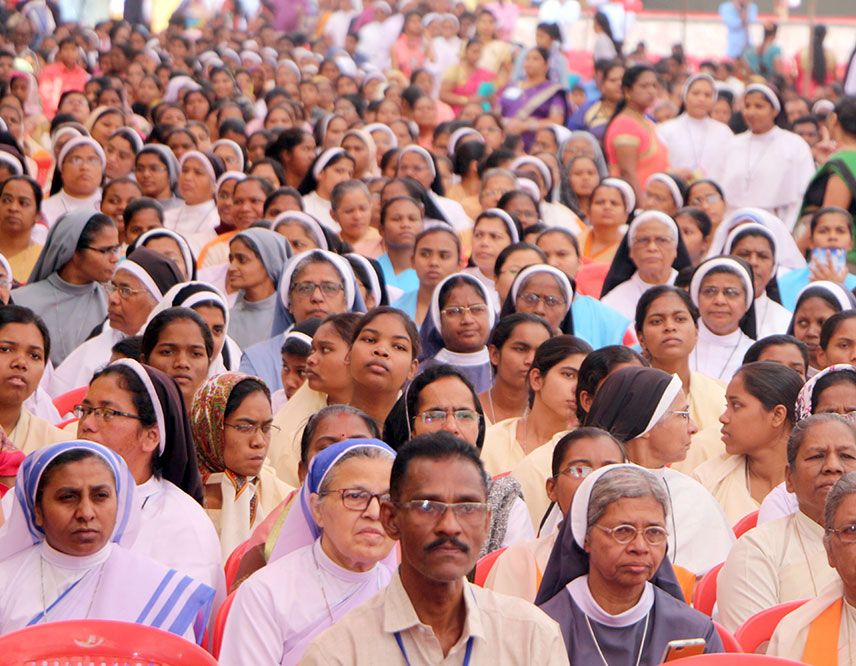 On November 4, 2017, Sister Rani Maria Vattalil was beatified at Indore (India). She worked with the landless and exploited farming families. Her activities were a thorn in the flesh of moneylenders, social exploiters and propertied upper castes, who hired an assassin to get rid of her.

On February 25 1995, Sr. Rani Maria, a member of the Franciscan Clarist Congregation, was travelling in a private bus from Udainagar to Indore.  Samandhar Singh, in the pay of the local money lenders,boarded the same bus. As the vehicle began to climb up Nachambore Hill, Singh started stabbing the sister. Then he dragged her off the bus, while continuing thrusting his knife in her body. He hit her 54 times. The sister died almost instantly. Nobody among the passengers bothered to protect her.

Sr. Rani Maria was loved by the poor, and she loved them in return. “They are my best friends,” she used to say. Her work attracted some of them to embrace Christianity. Her admirers, even among non-Christians, called her Indore Rani (“Queen of Indore”). She sought to make the exploited poor conscious of their rights, by organising study classes and workshops wherever she went. “The programmes and services I carry out are a true fulfilment of my mission to the poor. My concern for social justice is an integral part of my call to evanzelise,” she insisted.

All these activities infuriated the landlords, as she challenged their vested interests. Above all, she became the worst enemy of the moneylenders who extorted the income of the people in the form of exaggerated interest rates. In spite of many threats, the sister never stepped back from her initiatives. In fact, threats made Rani Maria more enthusiastic and zealous. Seva Singh Sulia, a catechist who knew her, says the nun’s greatest quality was boldness. “Once she was convinced about something, nothing could discourage or stop her from doing it. Indeed, they had to kill her to make her stop.”

Marykunju
Rani Maria was born on January 29, 1954. Her parents and family members were traditionally rooted in the Christian faith. Their parish belonged to the Syro-Malabar rite. At baptism, she was given the name Mariam, but her parents lovingly called her Marykunju (“Little Mary”).

After finishing her high school studies, she spoke to her family about her plans to enter religious life. Her immediate relations and elder brother were against it. They even requested their father not to give her permission. But he replied: “If she insists, what shall I do? If God so desires, how can we go against it?” In July 1972, Marykunju joined the Franciscan Clarist Congregation at Kidangoor, Kerala.

The Poor First
Her missionary dream was fulfilled when her superiors sent her to Bijnor, in Uttar Pradesh, in 1975. She served the poor in the villages of Bijnor for seven years. At the same time, she completed her graduation privately from the University of Bhopal and her Master’s in Sociology from the Riva University.

From Bijnor she was transferred in 1983 to Karunalayam at Odagadi, in the diocese of Satna. Here, too, she served the marginalised for about nine years, three as local superior of her community. Right from the beginning, she held leadership positions. She served Amala Province as the Provincial Social Service Consultant from 1991 to 1994 and was elected Provincial Councillor for Social Service in December 1994.

Wherever she was posted, she was active in giving formal and non-formal education for children. This slowly gave way to a much wider field of assisting the oppressed and the marginalised. Gradually, she became instrumental in the formation of self-help groups, non-formal education centres, adult education centres, credit unions, village committees, animation and leadership programmes, and in developing irrigation facilities with the assistance from the state government and banks.

Transformation And Joy
She was actively involved in the betterment of the adivasis (indigenous people), especially the women. She thoroughly studied the situation and began conscientization programmes to make them aware of their rights and of the injustice perpetrated on them.She taught the farmers crop rotation and pressed parents to send their children to school. She encouraged women to start small savings accounts to keep them away from the moneylenders.

The result of all this? Life changed, especially for the poor. Tarachand Solanki, a man who quit drinking and loitering on Rani Maria’s urging, worked with her during her three years in his village, now renamed Anand Nagar (“city of joy”), in the state’s Dewas District of Madhya Pradesh. He says: “Our village used to be known as KaalaPani(‘black water’) before Sr. Rani Maria came, but she turned it into a joyful place.

Symbol Of Love
As the news spread about her assassination, the entire Christian community in Indore and beyond, social activists and people of good-will stood up to protest. A large number of people participated in her funeral procession from Indore to Udainagar.

Since then, her tomb in Udainagar has become a symbol of love, service and sacrifice. It has become a place of prayer and pilgrimage. Many cherish her memory and use it as a powerful symbol of engaging themselves to liberate the oppressed. Through her courageous life and death, she has sown the seed of love, justice and brotherhood in many hearts.

Rani Maria’s provincial superior, Sr. Princy Rose, said her work affected around 20,000 people living in 15 villages. “She was committed to the Gospel and lived accordingly. Her intimacy with God helped her never to succumb to pressure from moneylenders and landlords. She has proved that we can live the Gospel even at a time the country faces serious persecutions and attacks. She showed us how to live the Gospel practically.”

If her death inspired many more sisters to work for the poor, her beatification will further inspire many other men and women, religious and not, to dedicate themselves zealously for the cause of the marginalised. There can be no better tribute to Blessed Rani Maria than this.