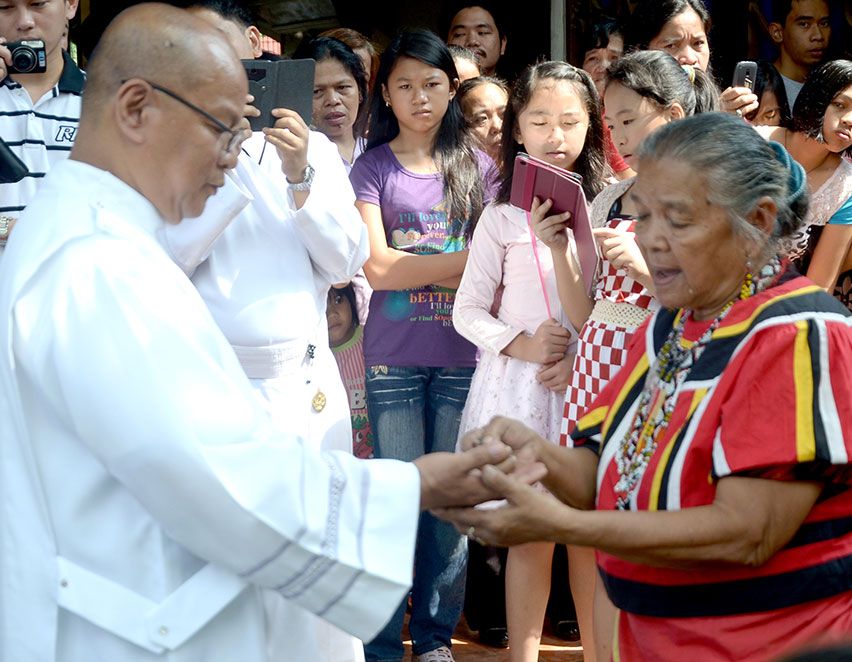 Missionaries are present amongst the Lumads advocating for their land rights, setting up literacy schools, improving their livelihood and providing for health programs. They also promote inculturation with the view of deepening the people’s faith.

At Puerto Maldonado, a city in Peru, on Friday 19 January 2018, Pope Francis met with representatives of indigenous communities of the Amazon basin from Peru, Brazil and Bolivia in order to know more about the plight of their peoples.

While facing a multitude of close to 100,000 inside a crowded sports arena, the Pope “gave a stirring defense of the region’s indigenous people, whose lands and way of life are threatened by industry and government, leaving almost no institutions to protect them..” as he deplored “the pressure being exerted by great business interests that want to lay hands on its petroleum, gas, lumber, gold and forms of agro-industrial mono-cultivation” and “threats from policies that ostensibly aim to conserve land without taking account its inhabitants.”

The words of Pope Francis spoken in the context of Latin America resonate very easily with the realities of the indigenous peoples in the Philippines, especially in Mindanao where both the State and corporate institutions are pushing their political and economic interests at the expense of the indigenous people who are more popularly known as Lumads. Countless documentations indicate that their human rights as well as their rights to their ancestral domain have been easily trampled upon.

In fact, twenty-five years ago, at the Second Plenary Council of the Philippines (PCP II), the Philippine Church called on the faithful to respond to the needs of our indigenous brothers and sisters identifying them as one of the top priorities of our social concerns.  Earlier, the Mindanao-Sulu Pastoral Conference in 1976 already identified the Lumads as one of the priority sectors the Local Church should take into apostolic consideration.

Since then, in a number of dioceses and parishes in Mindanao, responses to the plight of the Lumads – from advocating for their land rights to setting up literacy schools, from assisting them to improve their livelihood to providing for community-based health programs –were initiated by local parishes or by religious congregations with missions in the interior.

The Redemptorist Response
Since they arrived in the Philippines, most of the Redemptorist missions were among lowland Filipino Catholic villages and most were preached missions lasting only a few weeks as the Redemptorists moved from parish to parish, especially those that had no pastors for so long. After Vatican II, there arose an interest to expand the outreach of these missions as they decided to engage Lumad communities when and where they encountered them in the interior upland villages.

This expansion was realized when the Redemptorist Itinerant Mission Team (RIMT)  – composed of Redemptorist priests and brothers, as well as lay missionaries – was established by the Redemptorist Province of Cebu in 1989. For almost three decades now, the RIMT members took an active part in the accompaniment process with Lumad communities in Dioceses such as Dipolog, Pagadian, Ipil, Cotabato, Digos and Tandag.

Strictly speaking, their engagement with the Lumads assume that its objective is for the missionaries to be present among the Lumads and to share their life and faith.

If there are possibilities of a liberation-oriented program of promoting total human development, then steps are undertaken to make sure that the team members either support what has already been introduced or come up with new initiatives. But all these are undertaken within the context of a process where the Lumads themselves play the major roles as they take part in every step of the program.

Concrete Approaches To Mission
The mission of the Redemptorists to the Lumads coincided with a shift in the legal provisions regarding ownership of ancestral domain. Until recently, there were only two land categories in the country, either these are public (owned by the State) or private lands (owned by individuals or corporations). In the 1987 Constitutional Convention, a provision in the Constitution added a third category, namely, the right to ancestral land specifically meant for the IPs.

It took however a full decade before Congress passed a law to concretize this constitutional provision with the passage of the Indigenous Peoples Rights Act (IPRA). With this law, the State issues a Certificate of Ancestral Domain Title (CADT) to IP communities.

When RIMT enters a Lumad area, and a CADT has not been issued, they seek to find ways to network with the National Commission on Indigenous Peoples (NCIP) at the local level to find out how they can collaborate to facilitate its issuance. It is a long process that entails a lot of research and documentation work, as well as consultations with the community and meetings with all agencies involved.

Once a CADT is issued, the work of facilitating the setting up of an Ancestral Domain Sustainable Development and Protection Plan (ADSDPP) is put in place, which again is a long and tedious process. If the process is well facilitated with full engagement of the Tribal Council and the chieftains as well as the entire tribal community, and resources are adequate, this plan can really take off resulting in the improvement of the people’s lives.

Alas, there are also unintended consequences when there are weaknesses and fragmentations among the Lumad themselves which can result in their CADT being leased to a private corporation (in some cases, these have been mining firms). This only means that when we engaged in this kind of program, we have to make sure that the outcome truly benefits the entire community.

Education, health and livelihood are the other fields that we try to engage in considering the high illiteracy rate in the upland communities, the poor health situation and the poverty which characterize many of these upland territories.

For example, in Bukidnon we were engaged with a Manobo community who were able to set up a high school. But in expanding to senior high, they needed additional rooms. So with a local funding agency, we helped them access funds to build this school.

In terms of health, the community-based health approach is the most appropriate as it mobilizes whatever are the indigenous ways that the Lumads respond to situations of illness, even tapping the wisdom of local baylans(shamans) who have continued to practice their indigenous healing ways. With the remaining forests located near the village, it is still possible to access medicinal plants and herbs useful for the rituals that serve as occasions for healing.

If they have not completely given up on their ancestors’ wisdom in cultivating the land as they embraced the ways of the lowlanders, some of these indigenous ways can still be retrieved. In fact, organic farming that is now in vogue today owes its basic principles from the indigenous wisdom. If there are changes to be introduced to improve on productivity, e.g. the use of carabaos and farm implements, these should be done in a manner as culturally sensitive as possible and always taking into consideration communal ownership rather than emphasizing private ownership.

Inculturation
In the uplands, there are Lumads who hold on to their indigenous belief system, but there are others who have embraced Protestantism and lesser numbers who are Catholics.  With those who remain ensconced in their indigenous belief system, we facilitate inter-faith dialogue. With the Protestants, we are engaged in ecumenical activities. And with those who have embraced Catholicism (and are organized into BECs), we promote inculturation.

It is important for missionaries to have a solid grounding both in terms of the theology of inculturation as well as steeped in the right approaches in terms of praxis. There are a number of important considerations: the team need to first be immersed among the people to have a grasp of their indigenous belief system or whatever is left of this at present. If they have access to a good ethnographic study of the tribe, this would be most helpful as reference material. If it does not exist, they have to do a bit of ethnography. Specifically they should try to identify the symbols important to the Lumads and their meaning. There has to be adequate time to help the people understand what inculturation is all about. And every step along the way, the people themselves participate in deciding how the process is to be undertaken.

Inculturation not only deals with liturgical celebrations but also ways in deepening the peoples’ faith (through catechesis, formation, recollections/retreats) as well as in the processes of implementing concrete responses to social and ecological issues. Thus it is important for the team members to continue to have study sessions, do reflections with the people and make sure that adequate preparation is undertaken before any action takes place.

A mission among the Lumad communities can be quite difficult and challenging. But based on our own experiences, such a mission can be most fulfilling as the missionaries take comfort in the thought that we truly become instruments of plentiful Redemption.

Pope Francis says that the greatest challenge for Christians is to plant Christian values in the social, political and economic sectors in view of transforming society. The author gives out…