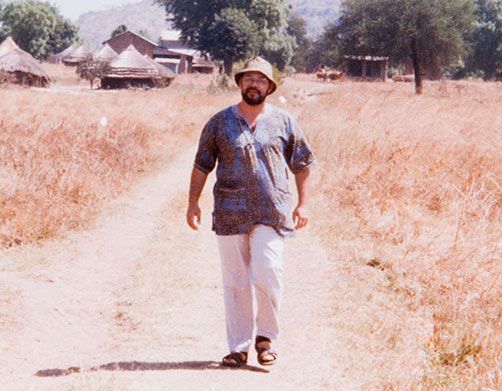 To be a missionary in the Muslim world is to care for the Christian minority and be witnesses to the Muslims through health care and education. Mission for the author is not about proselytising, but “seeing” options that God has put in his way.

Growing in Kuwait and Lebanon in my early childhood kept me thinking back to my native Egypt with all that was recounted about its great Pharaonic magnificence and ancient Coptic Christianity. The picture I forged of Egypt, painted with literature of ancient history, visits to the British Museum and exhibitions, gave me a sense of pride and self-confidence of my identity.

On the eve of the Lebanese civil war and with an opportune contract in London, Dad took me and my two younger brothers to England. As a teenager in the 70s growing with the Beatles music, Simon Garfunkel and Abba, my passion for science and technology moulded my aspirations, dreams and discontentment. Soon the systematic analysis of scientific disciplines allowed me to examine my quest for meaning. In the music of “The Sound of Silence” I pondered the purpose of my being.

Thoughts, knowledge and feelings knitted a tapestry of significance as I sought meaning in solitude. My origin was not calling me to return to the past, but to become my destiny. My experience of God as an itinerant in foreign lands was my fabric on which God drew His design.

Since I was a Catholic missionary with an Arabic background; Sudan and Egypt were undisputed destinations. Being a British–Egyptian, which recalls Egypt as British protectorate and Sudan as a colony made my official identities as an ideal passport to Sudan and Egypt. While others would wait for years to acquire their visas I would enter with ease. As if God designed me for the purpose to be sent into these Arab lands.

Arabs and Muslims are associated in popular perception, which begs the question: what is the use in preaching to Muslims? With Sudan and Egypt Islamic states, where Christians are a minority, our mission is to care for that minority and witness to the Muslims through health care and education.

Before the new millennium, activities in human development were no longer exclusive to Church activities. UN-bodies, NGOs, al-Da’wa al Islamia – the Islamic call – and many Islamic organisations took over, more professionally, with human aid and development while at the same time proselytising in Sub-Saharan Africa. For me, St. Daniel Comboni’s (founder of my missionary institute – the Comboni Missionaries) saying Saving Africa with Africa meant education. Our Comboni College in Khartoum, the capital of Sudan, furnished an appropriate space for cultural, moral and spiritual education.

Proselytising Or Conversion?
When humanitarian aid systems addressed the needs of people who are on the edge of survival, it was difficult to create a self-sustaining society. Experiencing emergency after emergency for 14 years in Sudan dug a deeper pit of dependence and poverty. With aid as bait, Islamic proselytising activities were swiftly spreading through Africa. Christians were prohibited to increase their affiliation due to a legal ban on converts to Christianity. However, Sudanese people from South Sudan embraced Christianity regardless of persecution and discrimination. The joy of neophytes amidst misery and oppression was a repeated miracle that baffled the reasons for their joy.

I saw unconditional joy in their laughter, singing and dancing, as pure in its manifestation as it is spontaneous. More than possession, their joy comes from their sense of affiliation. Their “richness” is in their community, even when dispersed, they find each other when they dance with joy in binding rhythm and movement.

Their being community has a sense of belonging; it is instinctive. Where we speak of sharing and teaching about common good, they live it before they name it as a value. Being community surpasses religious differences, giving way to tribal adherence above any religious one.

When the religion of aliens enters the system of marriage, it is confronted with verifying tribal rules such as the dowry. The future security of the newlyweds is assured by the elders and chieftains of the tribes verifying the fidelity and the bond of union.

Marriage is the institution that preserves this affiliation where two families enter into alliance for generations to come. Where the couple is not just two individuals from various clans, but a new budding branch of an existing tree of parents, grandparents and ancestors.

In this context, Christianity is at a disadvantage with its monogamy, where Islam has both the financial advantage of the dowry as well as the legal acceptance of polygamy. Since missionaries work among the poor, the chance of a good dowry is much less than those who are commercially abled. So Muslim young men marry easily and more numerously than Christian men.

The Spread Of Islam And Democracy
Although Islam has the upper hand on Christianity through polygamy, it attempts to “educate” the African youth according to ideologies that form the future radical Islamist. Islamic education differs from Catholic education in both method and content. Although a certain degree of bias exists in every education system, the anthropological philosophy determines its objectives.

The past is better than the present where the age of the Caliphates is the model of ruling. The Abbasid age was the peak of science and knowledge. For Islam obedience and submission to God supersedes human will or choice. Therefore democracy is based on human opinion that will always be errant in comparison to divine will expressed in the Sharia.

Becoming a Muslim guarantees a predestined future to be among the elect. At best a true Muslim is God’s slave, a faithful, obedient servant to the Sharia and Muhammad’s practices. Humanity is predestined by God to the reward of paradise or condemnation to hell. Since Islam is the ultimate religion, it abrogates what comes before it from Judaism and Christianity. Thus Islamic mission calls all humans to believe – accept this ultimate truth or else die.

Choices In Life
Education and human development in Christian Catholic anthropology respects the human conscience, with all its limitations without denying its depth and that it is an essential fabric of human dignity. Working in Sudan and Egypt during these countries’ transition events – the Sudanese referendum with the birth of the Republic of South Sudan and the Egyptian revolutions in the midst of the so called “Arab Spring” – as Comboni missionary I spent time in listening and understanding people’s motivations and convictions. Arabs, Egyptians and Sub-Saharan Africans seek choices. Among these various ethnic groups I hear a frequent question asked: are humans created to be predestined and thus submit to our fate or do we have choices?

My missionary experience changed from trying to proclaim values and to enlighten, into asking questions and accompany people to reflect about realistic choices in life. A life that we live together as human beings with meaning and dignity, both of which stem from knowing myself and the One who desired my being.

As we journey together on a quest in discovering the purpose of our being, I share what I believe and how I came to discover it. That religion is a necessary vehicle to transmit and receive experiences of God, but faith helps me to interpret the world in which I live and grow. Faith helps me to understand the various images of God without excluding the image of the unseen God, who is Christ.

Christ Jesus whom Muslims call Isa is an option that you can choose. Even if no one chooses to know Christ, I remain to be myself, a Christian living the meaning of a God-Man offering Himself as an option for more life with integrity. Mission for me is not about proselytising but “seeing” options that God has put in my way.  As I journey on the choices I live, dialoguing with those who are searching; it enriches my faith-life in the hope for a better world.