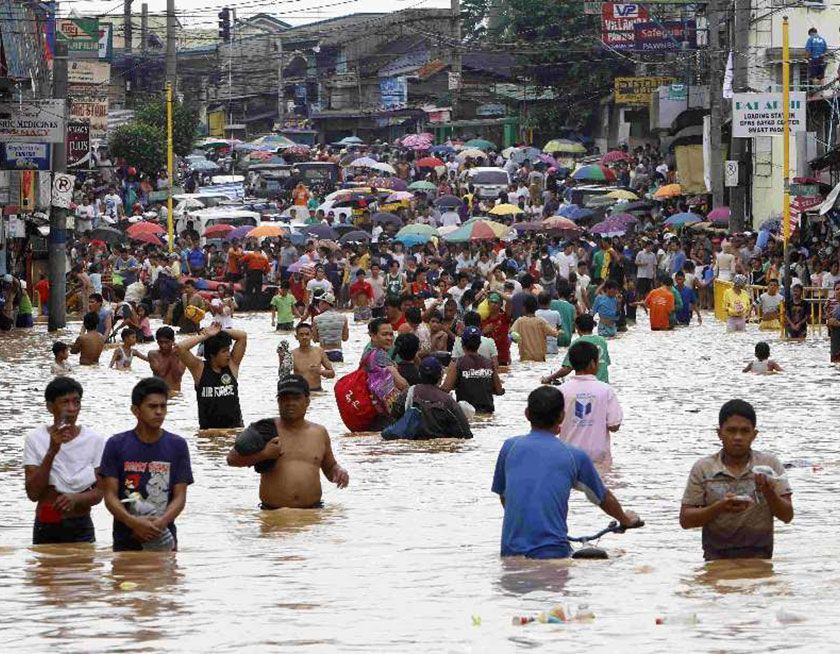 When rain falls during the wet season, there are those who enjoy the shelter and warmth of home. However, there are areas where many suffer the onslaught of rains and floods aggravated by uncaring fellowmen and indifferent local leaders.

The months of August, September and October are known as the rainy season in the Philippines. Monsoon rains, flooding, heavy traffic, leptospirosis, class suspensions and the like are common during this period.

At night, the sound of rain hitting the rooftop is like a melody, a cure to the weary soul. One is tempted to drift off and be carried away by its sweet sound. Silence envelopes the night. Nothing is heard except the rain. Then, sleep arrives: a deep rest, a long night of bliss to people who are blessed with the warmth of home and family.

In other areas, millions of souls suffer as heavy rain falls. They are the less fortunate ones. Most of them live near the esteros and canals in slum areas, or along the streets and  sidewalks with “karitons” as their only shelter, struggling daily in life. Their backs are wet; their stomachs are empty. Their  lives are always endangered by flooding, starvation, sickness and the indifference of people around them.

According to Greenpeace, an environmental group, “the Philippines is the third worst polluter of the world’s ocean, and is among the five Asian nations that contribute to more than half of the eight million tons of plastic waste dumped into the oceans every year.”

Manila and Pasay are two examples of cities whose people are abandoned by its local leaders. There is garbage everywhere: the smell, the sight of shanties— people’s miseries echo the abuses of those in power. Its slum dwellers and residents live in the worst inhumane conditions. All other cities and municipalities of Metro Manila and nearby places are no exception, with the poor and  the marginalized in difficult struggles. They exist but do not live.  No one seems to care.

As I became a senior citizen,  everything has also come of age. It’s a pity that I live in an uncaring world, worn out, depreciated, with people being neglected and trampled upon. Every night I wait for  the rain to fall. I had already prayed the Rosary and offered prayers for the country and its people. Like others, I am also part of the blame. But I still believe in God’s mercy and love as I see my wife sleeping soundly beside me.

The evidence of climate change is more visible than ever as global heating affects each and every region of our planet. The only way to stop other ecological disasters from buffeting our planet is to…

Protecting the environment is not just an ecological concern but also a social one. The impact we have on the earth, similar to how the coronavirus pandemic affected our lives, does not only influence…

The coronavirus pandemic affected the regular daily living of citizens, curtailing the social and economic dimensions of human beings. With the uncertainty as to whether this state of affairs will be…