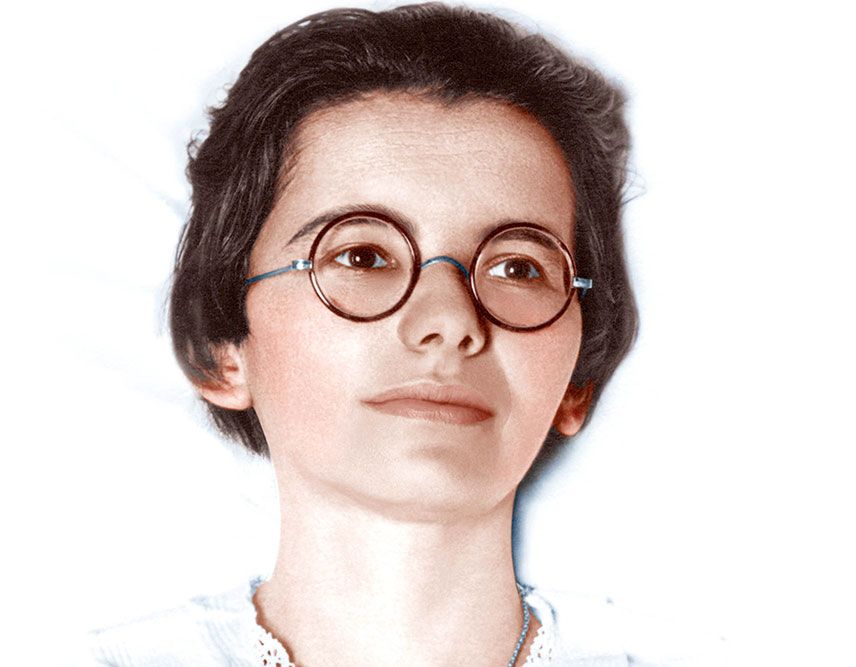 The French mystic Marthe Robin only ate the consecrated host and relived Christ’s passion every Friday for fifty years. Countless Catholics came to draw inspiration and strength around her housebound existence. The Foyers de Charité is the movement she founded.

The venerable Marthe Robin (1902-1981), a Roman Catholic lay woman mystic, was born into a peasant farming family at Châteauneuf-de-Galaure (France). She became bedridden when she was 21 years old, and remained so until her death. Robin’s sickness strengthened her faith and the Lord granted her extraordinary mystic gifts.

In 1925, she wrote an Act of abandon and love to the will of God. She desired to consecrate herself to Christ and from then onwards loved the Eucharist more and more. From 1930 onwards, Robin only ate the consecrated host and nothing else. This unsought fast lasted until her death 51 years later.

Her stigmata first appeared in early October 1930. A little later, she started to relive the Passion of Christ every Friday, and this too lasted until her death in 1981. Many friends, family members and numerous priests witnessed this. Robin herself appealed for discretion concerning these phenomena and encouraged Christians not to focus on them.

Although she was bedridden, Robin met countless people. She participated in the life of her diocese and her village as well as she was able. It is estimated that in the span of fifty years, she individually met more than 100,000 people, including hundreds of priests and many bishops. She was also a prolific letter writer, which she managed by dictating to a secretary.

Robin received visits from people such as Jean Guitton, Fr. Garrigou-Lagrange, Sr. Magdeleine, founder of the Little Sisters of Jesus, and many other prominent French Catholics.

She died in 1981. Her funeral was a triumph. It took place in the sanctuary at Châteauneuf-de-Galaure, in the presence of four bishops and over 200 priests. Her tomb is in the cemetery of St. Bonnet. The number of visitors going to pray at the farmhouse on La Plaine, where Robin lived, doubled between 2001 and 2011, reaching 40,000 a year.

The “Charity Homes”
In 1936, with the help of Fr. Georges Finet, her spiritual father until her death, she founded the first Foyer de Charité (Charity Home). The foyer organized five-day retreats, and around two thousand retreatants participated annually. Most of them, at the end of the retreat, went to visit Marthe.

Lay people participated in the life of this foyer under the supervision of a priest. This involvement of lay people was unusual in pre-Vatican II Catholicism. Since then, a total of 75 of these communities have been founded in 44 countries, either directly by Marthe herself or inspired by her example.

In 1984, the Foyers de Charité were officially recognized by the Catholic Church as an association of lay faithful of pontifical right, under the supervision of the Pontifical Council for laypeople.

The main mission of the Foyers de Charité is to participate in the new evangelization through the preaching of spiritual retreats that are open to everyone. They offer 6-day retreats in silence, during which the participants are welcomed as if they are part of the family and receive teachings that summarize the fundamentals of the Catholic faith.

Each year, the Foyers de Charité welcomes more than 50,000 people on a spiritual retreat. All adults are welcome, from the age of 17, whether they are believers or not. Everyone receives the same loving welcome that is respectful of each person as an individual and their own reasons for coming to the retreat.

The members of the Foyers welcome them into their community as part of the family. They make every effort to make everyone feel comfortable and free to participate in the activities proposed or not.

A Cluster Of Initiatives
From 1930, Marthe Robin ceaselessly prayed to have a Catholic school in her native town. Her prayer was heard and now the members of the Foyers de Charité run schools, homes that take in children in difficulty or with disabilities and abandoned babies, homes for the elderly, dispensaries, canteens for the poor, a diocesan spiritual center, a printing shop and some local religious radio stations.

The life of the Foyers de Charité is supported by a network called Enlarged Foyer–made up of the members of the Foyer and those taking part in the spiritual retreats–which testify to the light, charity and love of Christ throughout the world.

The Foyers de Charité have in turn influenced the founders of various communities within the charismatic renewal, including the Community of St. John, the Emmanuel Community, and the Community of the Beatitudes.

The “heroic virtues” of Marthe Robin were recognized on 7 November 2014 by Pope Francis. She is therefore declared venerable and the recognition of a miracle could open the door to her beatification.