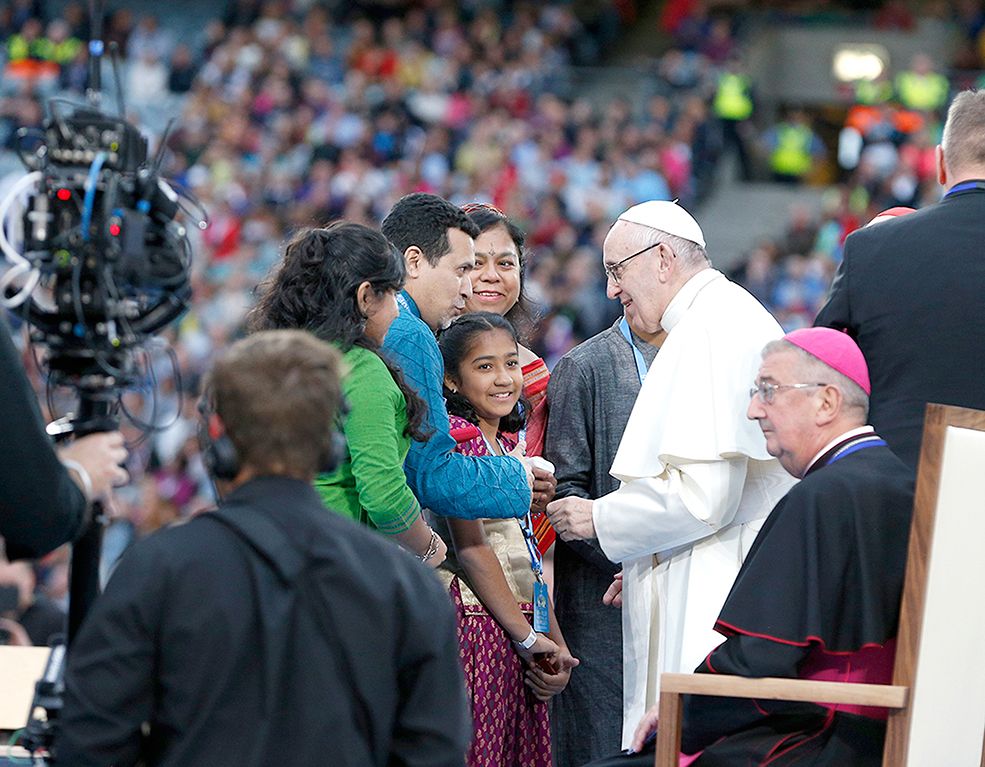 Released five years ago, Pope Francis’ apostolic exhortation Amoris Laetitia (The Joy of Love) came up with a reformulated pastoral approach to Catholics living in irregular relationships. Here, we present an analysis of the effects the document has had in the five years since its publication.

Amoris Laetitia marked a shift away from an exclusive emphasis on the church’s idealistic image of family life, one that had often felt out of reach for ordinary Catholics.

“At times we have also proposed a far too abstract and almost artificial theological ideal of marriage, far removed from the concrete situations and practical possibilities of real families,” Pope Francis wrote.

While still encouraging Catholics to live up to the church’s ideal for marriage, Pope Francis said, pastors must find ways to welcome the many Catholics living in relationships deemed “irregular” in church teaching: Catholics who had been divorced and civilly remarried without having their first marriage annulled, gay and lesbian couples, and unmarried cohabitating couples.

In light of the church’s “solid body of reflection concerning mitigating factors and situations,” the pope wrote, “it can no longer simply be said that all those in any “irregular” situation are living in a state of mortal sin and are deprived of sanctifying grace.”

Instead, the document instructs pastors to work with such couples to examine their consciences for what God is calling them to do and to discern “with sincerity and honesty what for now is the most generous response that can be given to God,” keeping in mind that the answer may not be the same for everyone.

In a now-famous and controversial footnote, Pope Francis noted that in some cases, people whose relationships were not blessed by the church may find themselves called to return to the sacraments. Previously, divorced and civilly remarried Catholics who did not receive an annulment were considered to be “persevering in manifest grave sin” and were barred from receiving Communion.

Diverse Interpretations
One must take into account the diverse interpretations of this document by bishops and theologians around the globe. Pope Francis, shifting away from blanket rules and toward case-by-case discernment, left the decision on whether to admit remarried Catholics to Communion to local bishops, who have interpreted the teaching in a variety of ways in their dioceses.

Bishops in Malta, Germany, Argentina, and San Diego, Calif., for example, have instructed priests in their dioceses to help divorced and remarried Catholics discern whether they should return to the Eucharist, with the Maltese bishops going so far as to say that for some couples, living “as brother and sister” can be “humanly impossible.”

On the other hand, some bishops have concluded that all divorced and remarried Catholics must choose between sexual relations with their spouse and reception of the Eucharist, effectively making no change relative to the practice before Amoris Laetitia.

One such bishop, Archbishop Charles J. Chaput of Philadelphia, wrote soon after the document’s release, “Undertaking to live as brother and sister is necessary for the divorced and civilly-remarried to receive reconciliation in the Sacrament of Penance, which could then open the way to the Eucharist.”

For his part, Pope Francis has said informally that the Argentine bishops had interpreted Amoris Laetitia correctly when they stated, “When the couple’s concrete circumstances make it possible, especially when both are Christians with a journey of faith, one can propose a commitment to living in continence.”

In other cases, they said, further discernment may be necessary; for example, abstaining from sex could harm a new marriage and the children who are part of that family. There could also be factors mitigating a spouse’s culpability in his or her divorce. In those cases, they said, Amoris Laetitia opens the possibility of access to the sacraments of reconciliation and the Eucharist.”

Bearing in mind the difficulty of quantifying how many Catholics have found themselves able to return to the sacraments following Amoris Laetitia, given the wide variations in how both bishops and lay Catholics interpret the church’s teachings, what effects can one say Amoris Laetitia has had in the five years since its release? I would posit three.

Effects
First, some Catholics who had been ineligible for Communion, inspired by Francis’ approach, will have quietly sought out their pastors and discerned whether or not to return to the sacraments. For those who have, receiving Communion and even being accompanied by a pastor could have a deeply positive and consoling, although largely hidden, effect.

The second and more visible outcome of Amoris Laetitia is that it galvanized resistance to Pope Francis and his magisterium among his opponents in the church. The pope foresaw that some Catholics would be uncomfortable with his shift away from blanket rules and toward case-by-case discernment: “I understand those who prefer a more rigorous pastoral care that leaves no room for confusion,” he wrote.

Complaints that Amoris Laetitia was sparking confusion came most vocally in the form of the now-famous dubia–a list of yes-or-no questions addressed to a church authority–from four cardinals demanding that Pope Francis affirm or deny whether he was rejecting previous church teaching.

The pope has not responded to the document. His supporters say doing so is unnecessary because Amoris Laetitia states that it is not changing church teaching but is instead posing possibilities for pastoral care in complex cases; critics have taken the lack of response as confirmation that the pope has broken from church doctrine. A group of traditionalist priests and academics followed the dubia with a “formal correction” of the pope, a measure that had not been employed since the 14th century.

Opposition
Such opposition has now expanded far beyond criticism of Pope Francis’ openness to Communion for the divorced and remarried, to include in some circles opposition to his entire papacy. Some have even questioned the legitimacy of his election, frequently accusing him of heresy and placing him at the center of “deep church” conspiracy theories.

This small but vocal resistance, seen most widely in the United States, led one journalist to ask the pope if he thought there could be an “American schism.”

Despite such resistance, Amoris Laetitia has had a third, ongoing effect of furthering the implementation of the teachings of the Second Vatican Council, including synodality, the primacy of conscience, and the universal call to holiness that Pope Francis has made a goal of his pontificate to actualize.

With a year of study and reflection on Amoris Laetitia already underway and a “synod on synodality” planned for next year, it is clear that Pope Francis does not see the work of Amoris Laetitia as complete.

The document followed up on two synods of bishops at the Vatican in 2014 and 2015, where representatives from around the world gathered to discuss the issues that families in their regions faced and to propose solutions.

The suggestion to open Communion to some remarried Catholics originated with the German bishops and was approved by those at the meeting, representing the “synodal” way of making decisions–that is, with church leaders listening to the needs of those they serve and discussing teachings together, with the pope being attentive to those discussions and making a final decision.

The stress on the primacy of an individual’s conscience in making decisions continues to be emphasized in “Dignitatis Humanae,” the “Declaration on Religious Freedom” promulgated at Vatican II. That document affirmed the notion of the “primacy of conscience” (present in Catholic teaching since St. Thomas Aquinas), saying: “In all his activity a man is bound to follow his conscience in order that he may come to God, the end and purpose of life. It follows that he is not to be forced to act in a manner contrary to his conscience. Nor, on the other hand, is he to be restrained from acting in accordance with his conscience, especially in matters religious.”

The apostolic exhortation brought into consideration some concrete cases in which a person with a well-formed conscience may find themselves called to receive the sacraments even when the church declares them ineligible; the document also calls on pastors to help them discern well. As Pope Francis wrote pithily, “We have been called to form consciences, not replace them.”

Ultimately, Amoris Laetitia reminds the faithful of the “universal call to holiness” that undergirded the most important documents of Vatican II. The notion that the vocation of the laity was just as holy as that of clerics and religious is present in the challenge of Amoris Laetitia to laypeople and pastors to see where the Holy Spirit is calling all people to holiness, no matter how messy the concrete realities of their lives.  Published in America Magazine

One family with non-Christians

Violence committed against each other, unfortunately, emphasizes the stark differences among believers of different religions. In this scenario, it is impossible to think that followers of different…