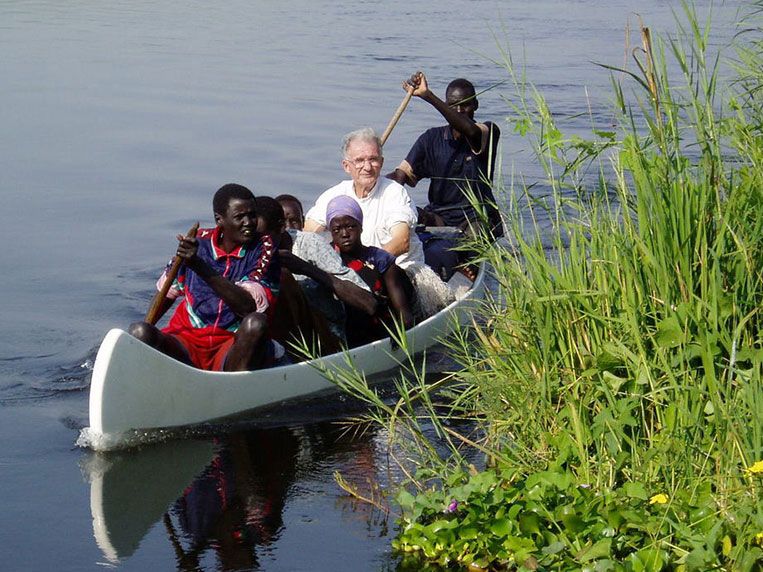 As the Church celebrates the fiftieth anniversary (1965-2015) of Ad Gentes, the Vatican II document on mission, it is enlightening to recall the evolution and content of this pivotal document within the Council; one discovers an interesting and dramatic story! The material presented here unfolds in three areas: (1) key moments of the Ad Gentes journey during the Council; (2) brief synopsis of Ad Gentes itself; and (3) recent reflections by Pope Benedict, a member of the “Missions Commission” that drafted Ad Gentes.

When the second session of the Council concluded (1963), work had been completed on only five or six essential schemas. In an effort to speed up the process on a variety of other matters, it was proposed that only the key points would be treated in “a few sentences or propositions”; then, post-conciliar commissions would produce directories or handbooks. The document on missions was one of seven schemas which were to be handled in this summary fashion.

When bishops from various mission territories, especially from Africa, arrived for the third session (1964), they expressed their displeasure with such a minimalistic approach; they indicated their strong desire that a full schema be devoted to the missions. Over 100 Council Fathers notified the Secretary General that they wished to address the “mission propositions.” They (along with many superiors general) strongly rejected the propositions and asked for the drafting of a full schema; for them, the missionary dimension of the Church was far too important to be relegated to a few brief propositions. Many individuals worked hard to secure the support of key cardinals and the signatures of numerous bishops to ensure that a full document would be produced.

After the propositions were rejected at the third Council session (1964), the task of preparing a new schema was assigned to a five-man subcommission of the full Missions Commission. Father Johannes Schütte, SVD Superior General, received the most votes and was named chairman. This working group selected their own periti (theological experts); among them were Father Joseph Ratzinger, personal theologian to Cardinal Frings of Cologne, and Father Yves Congar.

Numerous meetings of the Commission and subcommission were held to prepare the full schema on the missions; they were hosted by Father Schütte at the SVD house in Nemi. The greatly-revised schema came up for discussion on the Council floor on October 7, 1965. Father Schütte presented an introductory overview, stressing the fact that the Missions Commission had unanimously approved each chapter. More debates followed. All-in-all, twenty ballots were taken on the new schema between November 10 and 12, 1965. Negative votes on the individual chapters ranged only from 6 to 13; various written qualifications (both positive and negative) were received. When the revised text reached the Council floor for a final formal vote on December 7, 1965, it was adopted by 2,394 positive votes with only 5 negative votes. Interestingly, the number of positive votes (2,394) was the highest reached for any single Vatican II document.

The “mission document” of Vatican II, which reflects the main features of the Church’s missionary reality, is presented in six chapters and forty-two numbers or sections: doctrinal principles (2-9), mission work itself (10-18), particular churches in mission territories (19-22), missionaries (23-27), organization of mission activity (28-34), missionary cooperation (35-41). Section 1 contains an introduction, while section 42 comprises the conclusion to the decree. Ad Gentes, a document of modest length, reflects the final stage of a long redactional history. One must note that this is the first time in the history of the Church that “the missions” were treated specifically by an Ecumenical Council.

The mission document Ad Gentes further asserts: “This decree flows from the “fount-like love” or charity of God the Father who, being ‘principle without principle’ from whom the Son is begotten and the Holy Spirit proceeds through the Son …” (AG 2). In a word, mission flows from the very heart of a Trinitarian God, who is described in the original Latin text as fontalis amor (fountain-like love or fountain of love). The Church and her mission emerge from the very heart of God, a God who is love in itself! “God is love and anyone who lives in love lives in God, and God lives in him” (1 Jn 4:16). Mission is thus an epiphany of our God, whose very identity is love. Truly, a beautiful insight into the origin and mode of all missionary activity!

Ad Gentes beautifully describes the role of the Church in God’s mission. The Lord Jesus “founded His Church as the sacrament of salvation and sent His apostles into all the world just as He Himself had been sent by His Father…. The duty that lies on the Church of spreading the faith and the salvation of Christ … flows from Christ into His members…. The mission of the Church, therefore, is fulfilled by that activity which makes her, obeying the command of Christ and influenced by the grace and love of the Holy Spirit, fully present to all peoples and nations…. Since this mission goes on and in the course of history unfolds the mission of Christ Himself, who was sent to preach the Gospel to the poor, the Church, prompted by the Holy Spirit, must walk in the same path on which Christ walked: a path of poverty and obedience, of service and self-sacrifice to the death, from which death He came forth a victor by His resurrection” (AG 5).

Mission activity itself “is nothing else and nothing less than an epiphany, or a manifesting of God’s design” (AG 9); it includes going out and “planting the Church” in places where people do not yet believe in Christ, as well as renewing the Church in places experiencing problems or suffering from various weaknesses. The Church engages in missionary activity “for the same motive which led Christ to bind Himself, in virtue of His Incarnation, to certain social and cultural conditions of those human beings among whom He dwelt” (AG 10). Concretely, this means establishing local communities, inserted into life’s concrete realities, fully inculturated in people’s values and national life (cf. AG 15, 22).

Ad Gentes asserts that the task of mission is shared by all the baptized: priests, deacons, religious, and laity - each “according to their own state” (AG 26). “The Christian faithful, having different gifts (cf. Rom 12:6), according to each one’s opportunity, ability, charisms and ministry (cf. 1 Cor 3:10) must all cooperate in the Gospel” (AG 28). It is crucial that missionary activity be carefully planned (AG 28-34) and done collaboratively (AG 35-41). Undoubtedly, “the whole Church is missionary and the work of evangelization is a basic duty of the entire People of God” (AG 35).

One reads in the conclusion of Ad Gentes: “The Council Fathers, together with the Roman Pontiff, feeling deeply their duty to spread everywhere the Kingdom of God, lovingly salute all heralds of the Gospel, and especially those who suffer persecution for the name of Christ, being made partakers of their sufferings. They are afire with that same love with which Christ burned toward people” (AG 42).

On July 9, 2012 Pope Benedict XVI made a private visit to the “Ad Gentes Mission Center” of the Divine Word Missionaries, located in the village of Nemi, close to the papal summer residence in Castel Gandolfo. It was in this building, then called the International Center of the Society of the Divine Word, that the Vatican II Commission on Missions met in 1965. The Pope was greeted by Father Antonio Pernia, outgoing SVD Superior General; at this time, the SVD Society was holding its XVII General Chapter in Nemi. Pope Benedict gave an extemporaneous talk in Italian, apologizing for not being able to improvise in English. He said that the meetings of the Missions Commission in Nemi were perhaps his “most beautiful memory of the entire Council.”

“I am truly grateful for the possibility to see this house in Nemi once again after 47 years. I have a very beautiful memory of it, perhaps the most beautiful of the entire Council. I lived in the center of Rome, at the College of Santa Maria dell’Anima; with all that noise, it was also beautiful. But being here in a green space, having this breath of nature and fresh air as well, was just beautiful in itself. And there was the company of so many great theologians, with the fine and important task of drafting a Decree on Mission. I remember, first of all, the Superior General at that time, Father Schütte, who had suffered in China, and had been condemned, then expelled. He was full of missionary dynamism, of the need to give the missionary spirit a new impetus. And he had me invited, a very young theologian of no importance. I don’t know why. But it was a great gift for me.”

“Then there was Fulton Sheen, who kept us enthralled in the evening with his tales, Father Congar and the great missiologists of Louvain. For me it was a spiritual enrichment, a great gift. The Decree met with no great opposition. Yet, there was a controversy, which I never really understood properly, between the school of Louvain and that of Münster: Is the principal purpose of the mission the implantatio Ecclesiae or Gospel [Evangelii] proclamation? But everything was converging into a single dynamism: the need to bring the light of the Word of God, the light of God’s love to the world and, through this proclamation, give new joy.”

“Thus, in those days, a beautiful and good Decree was drawn up, accepted almost unanimously by the Council Fathers. And I felt it was also a very good complement to Lumen Gentium because we can find in it a Trinitarian ecclesiology which begins, above all, with the classic idea of bonum diffusivum sui, goodness that has an inherent need to be communicated, to be given. It cannot remain in itself; what is good, goodness itself, is essentially communicatio. And this is already apparent in the Trinitarian mystery, in God, and is disseminated in the history of salvation and in our need to give to others the good that we ourselves have received.”

“Thus, with such memories I have often thought of those days in Nemi which, as I said, were an essential part of my Council experience…. Missionary dynamism is clearly alive, and it is only alive if there is the joy of the Gospel, if we experience the goodness that comes from God that must and wants to be communicated. Thank you for your dynamism…. Thank you all; may the Lord bless you. Pray for me, as I pray for you. Many thanks!”

* James H. Kroeger, MM, is professor of systematic and mission theology at Loyola School of Theology, East Asian Pastoral Institute, and the Mother of Life Catechetical Center, all located in Metro Manila.