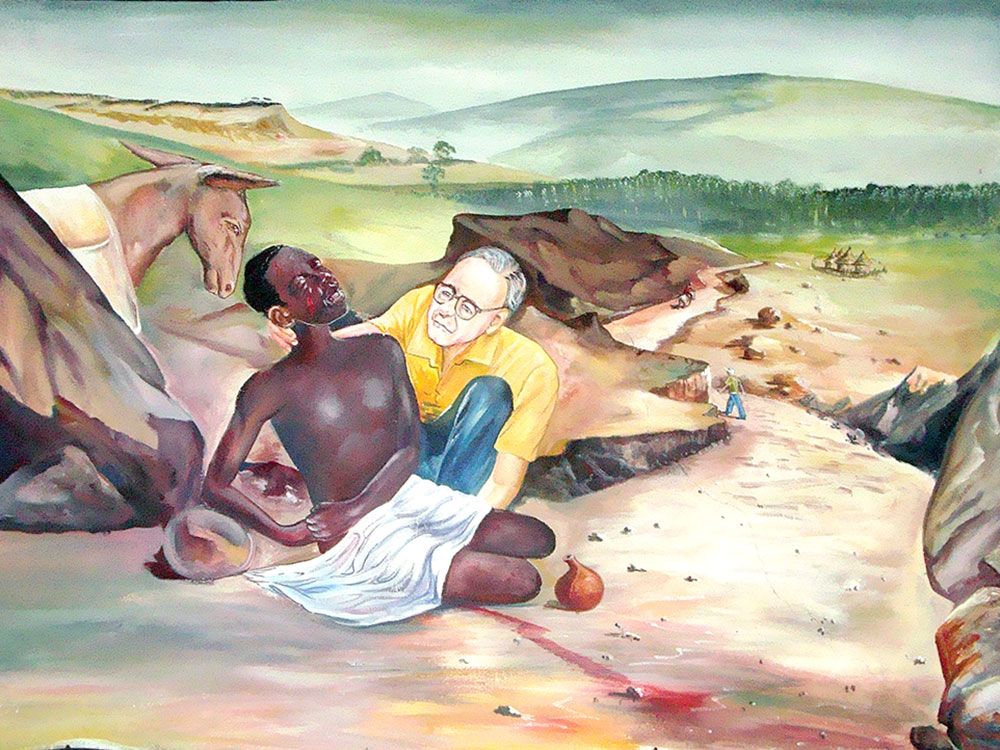 A matter of kindness

The parable of the Good Samaritan embodies universal values of compassion and generosity shared by peoples from all walks of life. Here, below, is a heartwarming story of how the Gospel narrative is lived out by human beings, even without knowing.

But a Samaritan, as he traveled, came along where the man was and, when he saw him, he took pity on him. He stopped and bandaged his wounds, pouring on oil and wine. Then he put the man on his own donkey and took him to an inn. “‘Look after him,’ the Samaritan told the innkeeper, ‘and when I return, I will reimburse you for any extra expense you may have.’” The next day, he came back and gave two silver coins to the innkeeper.

Of course, you are very familiar with the story above. It was Jesus Christ who shared this “parable of the good Samaritan,” as recorded by Saint Luke (Chapter 10:30-35), after those “experts in the law” asked him, “Who is my neighbor?”

“Which of these above-mentioned three men do you think was a neighbor to the man who fell into the hands of robbers?” Jesus asked them. “The one who had mercy on him,” someone replied.

I was reminded of the story shared with me by a Filipino couple who now lives in the United States. The wife wrote me and shared the story of her husband who was born to a poor family.

“When he was in high school, he contracted a very serious disease that caused my husband to be paralyzed from waist down. His parents, being so poor, could not afford to send him to a doctor or hospital,” she wrote.

It so happened that there was this young doctor from a nearby town who traveled by car to his clinic in the same town where the poor family lived. One morning, the father patiently waited for the doctor’s car to pass by their house. And when it did, the father stopped the car and the doctor, without ado, alighted from it. The father, matter of factly, told the doctor of his son’s illness. The sympathetic doctor suggested that the boy be brought to the hospital immediately for treatment. When the father told him that they cannot afford hospital expenses, the doctor volunteered to stop by their house each day before he proceeded to his clinic.

Every day, the doctor gave the boy injections and medicines to take. “The doctor did this every day for several months until my husband was cured,” the wife wrote in her e-mail. “He did not charge a single centavo for the medications, injections and all of his services.”

Indebted to the doctor

Forty-five years later, the husband kept telling his wife how much he was indebted to this doctor who saved his life. “After recovering from his illness, my husband finished high school, went to an engineering school, and graduated as a mechanical engineer,” she recalls. “We met and got married and in 1974, we immigrated to the United States.”

Her story continues: “My husband wanted to know if he could find a way to contact him so he could send his gratitude for saving his life. He searched the internet and found out that this doctor is still alive and still practicing at the age of 79.”

It was Christmas season and he thought this was a good time to send the doctor a short thank you letter for saving his life. In his letter, he enclosed a check in the amount of U.S.$100.00 as a small gift.

Since then, they have been communicating with each other. Below are some excerpts of the doctor’s replies to the man’s letters:

In July 2009, the doctor sent this note: “It is very heartwarming to receive a letter with an enclosed check from you. It is not the check that matters but the beautiful thought that goes with it. In the 55 years of my life as a doctor, I have not had a patient as sincerely grateful as you although I took care of you about 45 years ago. I am indeed very appreciative for your remembering me as a humble doctor who was able to minister to you when you were very ill. Your parents were very nice and simple people.”

On November 13 of that same year, the doctor shared this joy: “What I can say is that I’m blest to have a generous friend like you. The check you sent me is my biggest Christmas gift but what makes me happier is that you still remember me despite the years and distance.”

The wife in her e-mail noted: “The doctor also mentioned that my husband’s first letter and the first check he received were proudly shared with his staff at his clinic and that he framed the letter and the check. He and his staff were very touched.”

In another letter, the doctor wrote: “Someday, if health permits, I will try to travel to Missouri.”

“When you carry out acts of kindness you get a wonderful feeling inside. It is as though something inside your body responds and says, yes, this is how I ought to feel,” observed Harold Kushner.

Happy Are Those Who Are Persecuted

Persecution in different forms are part of our lives as Christians. However, we should not let this deter us in following the path of Jesus Christ, who was also persecuted for our sake.

In the first commandment, God defines His identity as the savior, the one who rescued His people from slavery. By claiming that He is the only true God, He asks the faithful to believe and put their…

There are no exceptions. Everyone mourns in one way or the other. It is in how one responds to it – by being one with Christ and by looking at the way the Blessed Mother experienced mourning – that…