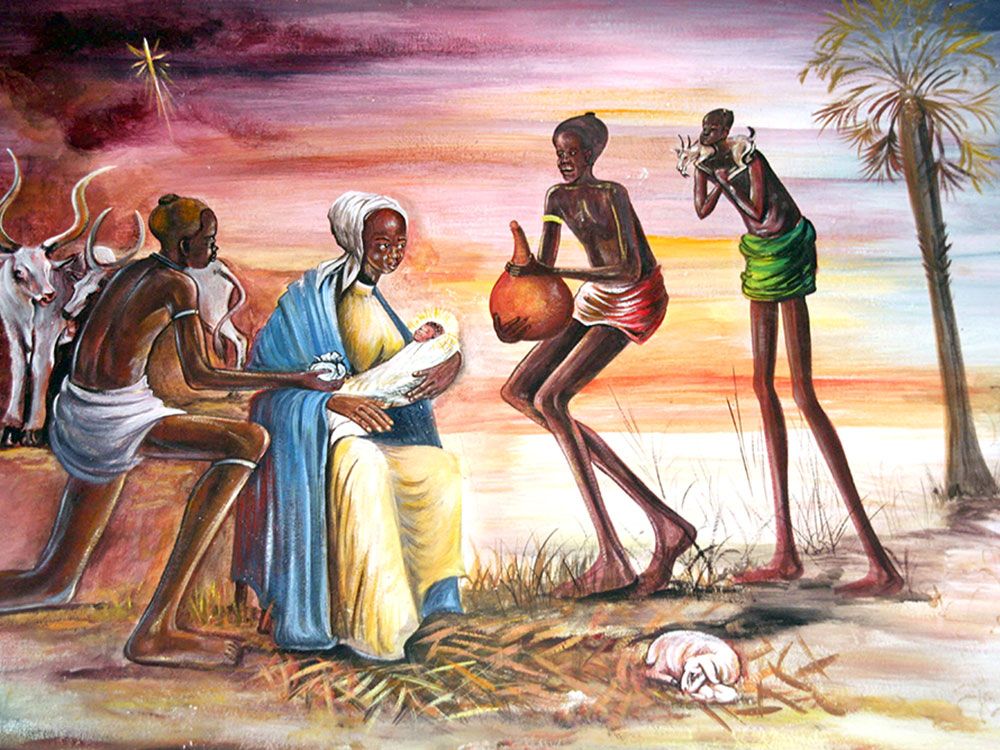 The night before Christmas

In Ghana, all hopes for a festive celebration of the birth of the Child Jesus were dashed off when, on the night before Christmas, soldiers attacked a village, taking away boys and girls. In spite of this tragic event, the expected birth of a baby turned suffering into hope and we still celebrated Christmas. This is how it happened.

For me, Christmas has always been one of the most joyful religious festivals. It is the time for playing cheerful Christmas music in the streets, on radio, on television and everywhere. Christmas had always been a religious celebration and churches start preparing as early as November. We really felt that we were preparing for the birth of Baby Jesus. Christmas is the time when relatives and friends bond so there are always people from different ethnic groups visiting each other’s homes.

All of us would look forward to the Christmas Eve Service at our church. After the Service, there would be a joyful procession through the streets. On Christmas Day, we would all go back to church to read the Scriptures and sing carols to remind us of the meaning of the blessed birth of Baby Jesus. We always thought that these were the things that meant Christmas. After the Christmas Service, young people would receive chocolate, cookies and crackers. They would be told that the gifts came from Father Christmas, and this always meant Christmas for us. They also received new clothes and, perhaps, even new pairs of shoes. Meanwhile, throughout the celebration, everyone was greeted with the special greeting, Afishapa, the Akan word meaning “Merry Christmas and Happy New Year.”

However, that Christmas Eve, things were different and I knew Christmas would never come. Everyone was sad and desperate after the so-called Army of Liberation attacked our village and took all the young boys and girls away. Families were separated and some were even massacred. We were forced to march and walk for many miles without food. The soldiers burned everything in our village and, during our forced march, we lost all sense of time and place.

Miraculously, one rainy night, we were able to escape from the soldiers. After several weeks in the tropical forest, we made our way back to our burned out village. Most of us were sick, exhausted, and depressed. Most of the members of our families were nowhere to be found. We had no idea what day or time it was.

On our way home, my ailing grandmother noticed a reddish and yellow flower we named, “Fire on the Mountain,” blooming in the middle of the marketplace. This tree had stood and bloomed for generations only at Christmastime. For some reason, the tree had survived the fire started by the soldiers that had engulfed the marketplace. It was a miracle! Grandmother told us that it must be almost Christmas because the flower was blooming. For a few minutes, my spirits were lifted as I saw the flower. But I became sad again. How could it be Christmas without my parents and our village destroyed?

How could this be Christmastime when we celebrate the birth of the Prince of Peace yet we have not known any peace, but only war and suffering? As I reminisced about past joyous Christmases amidst the present suffering, we heard the honking of horns of several cars approaching our village. At first we thought they were cars full of men with machine guns, so we hid in the forest. To our surprise they were not soldiers and they did not have guns. They were just ordinary travellers.

When they saw us, they were shocked and horrified at the suffering and the devastation all around us. Many of the travellers began to cry. They confirmed that tonight was indeed Christmas Eve. All of them were on their way to their villages to celebrate Christmas with family and friends. Circumstances had brought them to our village on this night before Christmas. They shared the little food they had with us. To keep us warm, they even helped us build a fire at the center of the marketplace. In the midst of all this, my pregnant eldest sister suddenly became ill and could not stand up.

“Except God, I fear none”

A few days after we had returned to our village, my grandmother announced that my sister was about to give birth. I was so afraid for my sister because we did not have any medical supplies and we were not near a hospital. Some of the travellers and the villagers removed their shirts and clothes to make a bed for my sister to lie on near the fire we had made.

On that fateful night, my sister gave birth to a beautiful baby boy. This called for a celebration and we did until the rooster crowed at 6 a.m. Everyone sang Christmas songs in his or her own language. For the first time, all the pain and agony of the past few months went away. When morning finally came, my sister was asked: “What are you going to name the baby?” She said, “His name is Gye Nyame, which means ‘except God, I fear none.’”

And so, we celebrated Christmas that night. In the midst of our suffering, it came in the form of the birth of my nephew. We saw hope in what this little child could do. His birth is the universal story of how bad things could turn into hope – the hope we find in the Baby Jesus.

A miracle occurred that night before Christmas and all of a sudden I knew we were not alone anymore. Now I know there is hope. I had learned that Christmas comes in spite of all circumstances for Christmas is always within us all. Christmas even came to our Ghanaian village that night.

Criticism of Facebook increased in 2021. Frances Haugen, a former product manager at the company, revealed that Facebook has put “astronomical profits before people,” and people have been abused and…

Mission in the Hidden Amazon

A Comboni Missionary living in the US, Father Joseph Bragotti, worked in San Luis Petén mission in Guatemala. He went back for a visit and took a pilgrimage to Tikal, the ruins of an ancient city, in…

As deforestation sadly continues everywhere in the world, its consequences such as drought, soil erosion, and global warming to name a few, are heavily felt. Thus, it is important for all nations to…