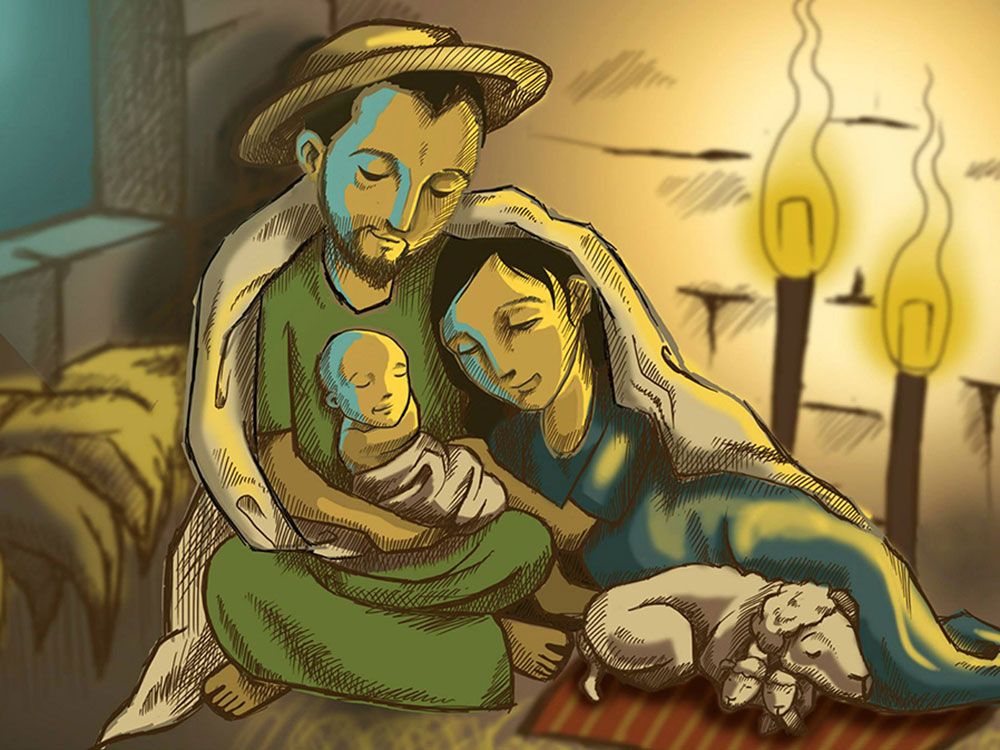 In the heart of the Advent period, which leads us to Christmas, we also celebrate, on December 8, the Immaculate Conception of Mary, the very special conception of a life with a singular destiny. The Blessed Virgin Mary is the ideal missionary who offers the world the Infant Son of God.

Mary is introduced to the mystery of her vocation by the angel Gabriel: “Save, oh full of grace, the Lord is with you!” Such a greeting makes Mary’s heart thump. The angel calms her: “Do not fear, Mary; you have found grace before God.” When God finds man, the first word He says to him is: “Do not fear!...” In the Bible, we find this calming invitation from God 369 times. Once, for each day of the year, with a few extras for particular moments!...

Fear hangs over us like a continuous threat in our lives. The biggest fear is of death, with its one thousand tentacles, pursuing our every step like a sinister shadow. It stops us from appreciating life, from savoring the good moments. We end up being afraid of everything and everyone. Including God. Or especially God! The result of a perverse image of a “god, man’s enemy.” The “adversary” managed to worm into our sub-conscience that God is an implacable judge, a sort of omnipresent spy, the killjoy of our life. Poor God, who sees Himself continuously feared, when what He desires is to love and be loved!

In Mary God becomes a child!

God tries to enter our lives with kid gloves to win our confidence over frightened birds. Feared for His greatness, He retreated to give us all the space we wanted. Even so, He didn’t stop being feared. Finally, He decided to become one of us, small and fragile, at Mary’s breast. Who would be afraid of a child? Of a God child, who cries and smiles, who abandons Himself in our arms? How great and surprising is the mystery of the birth...!

This is the most surprising and unusual fact in the religious annals of humanity. God renouncing His power to become one of us, weak and humble, unarmed and powerless! To know that God made Himself “in exactly the same way as ourselves” (Hebrews 4:15), that He suffers with us and, like us, He Himself does not give an “explanation” of evil but is a powerful comfort, in the sense that He assures us that God “is with us.”

The Son of God became incarnate to “remain” with us. He “is” all ages. He continues to be the “Baby Jesus” and is reborn in every child. And Mary’s maternal vocation carries on through time: to offer the world the Infant Son of God.

God is a child looking for a cradle in our heart. It is a God-Child that the world continues to need. In fact, it is not easy to dispel the dark fear of God who took over humanity. And we, Christians, at times with our “earnestness”, end up reliving such fears even more and making bad propaganda for God who is the Friend of man, but condemned to be the “bogeyman” for children.

To overcome such fear, many nowadays turn to a new strategy: that of denying God’s existence! For the same reason, Christmas has almost disappeared as a “religious time,” just to be celebrated at a commercial, social level. Secularized in the best case scenario, it has become a party for the family and children. An occasion to “pretend” the world isn’t as bad as it’s made out. For some moments we shut our eyes and dream of an enchanting, pretty, fraternal world!

The celebration of the Child of God is ignored. There is still no room for Him. God is condemned to be what He is: invisible!... Naturally, after the party, on opening our eyes again, the dream has burst like a bubble of soap. The return to reality is even more depressing!...

In spite of everything, the liturgical time of Advent and Christmas continues to be particularly conducive to proclaiming the Good News. Such an announcement is entrusted to three figures, each one with a password and a corresponding specific attitude: be happy with His promise, Isaiah invites us; convert to prepare for His coming, shouts John the Baptist; welcome Him into your heart, Mary whispers to us.

The three complement each other. Isaiah, with his erudition, seduces our mind and feeds our hope. John the Baptist ignites our will and brings it to the decision to convert. Mary, with her discreet presence, touches the deepest fibers of our heart and brings tenderness to it.

Which of the three might be the suitable evangelizing type for our times, for the new evangelization we’re summoned to? Which model of apostle would incur less resistance and more success in this type of post-modern society?

A new type of evangelizer

Which of the three should we choose? The prophet Isaiah? He is undoubtedly a captivating missionary; with a strong experience of God, he is generous (he offers himself voluntarily as a divine messenger: Isaiah 6), versed in the Scriptures, educated, a refined writer and poet, a strong personality (Chapter 7), an elite man, optimistic and a visionary (Chapter 12), a prophet whose influence has continued over the centuries!...

Undoubtedly, his learned and illuminated words, his ideals and comforting messages, continue to have an impact in our times. There is, however, an “if”: Isaiah is a visionary who comes from “far back,” seven centuries before Christ. He is not a “witness of the facts!”…

Let’s move on to John the Baptist. His qualifications are many but no less important. He is the “precursor of the Messiah!” A life set apart from his conception, along an unusual destiny, who incites wonderment around him (Luke 1:65). A figure characterized by his aesthetic rigor (Mark 1:6). A strong prophetic voice that resonates through all of Palestine, attracting disciples and crowds! A witness who ends up sealing his mission with martyrdom. “Of all the children born to women, there is no one greater than John,” Jesus will say (Luke 7:28).

There is no doubt that this man of forthright, strong character, who challenges examples of corrupted power, with a prophetic voice that shakes consciences, will always meet sympathizers. But perhaps he is not the type of evangelizer we’re looking for. The “shock” strategy used by the Baptist reaped fruit in other epochs. Nowadays, it seems to have thin results. Perhaps because of the exaggerated use of certain “scaremonger preachers,” in vogue in some sects. After the initial impact, they frequently become the object of ridicule!...

Without having to weave through a “litany” of Mary’s qualifications, I think that She could be the spokesperson for this trio. She has been chosen by God to prepare hearts to welcome His Son. Isaiah could offer her his messenger sandals and the Baptist could give her his prophet’s voice. The Word would find in her agility and lightness, simplicity and purity, grace and beauty. The young maiden Mary from Nazareth would again have her breath taken away with the announcement of the Good News. She would be stripped of all the accessories and trappings that end up overshadowing her. The Word would recover its splendor and vitality. It would be freed of the useless paralyzing armor it has been clothed in, in the fight against the “Goliaths” of our time, making its step slow and heavy and awakening distrust and resistance in few reactions. The Word would recover its skill, trust and the kindness of the young David!

A maiden, offering a God-Child: this is the ideal missionary of the new evangelization. To again navigate the paths of the world with the lightness and solicitude of a heart, to whom love gave wings (Isaiah 40), so that her Son’s smile and voice can reach everywhere.

Mary offers us her Child, who smiles at us and comes with trust into our arms; who opens our lips into a smile and makes our heart tender; who wakes up the sleeping child in each one of us. We’re not afraid of this God-Child. But don’t let Him grow up! Eternally small! We’ll be the ones to grow up, contemplating eternal childhood in His eyes! Until one day, all our fears conquered, we’ll discover children in Him! And then we’ll run to meet the Father and throw ourselves trustingly into His infinite embrace. In Him, happy, we’ll finally rest, all as children!...

A man for the present

The feast of St. Matthew has been celebrated, for a long time, on September 21. His vocation to be part of the group of the Twelve causes some wonder, given his social and religious background, but…

A vocation with five houses

John the Baptist is the bridge who, from the banks of the First or Old Testament, brings about the fulfillment of the old promises to the new Promised Land, at the time of the New Testament. He is…

God looking for one man

Saul of Tarsus, “the 13th apostle” Paul, the great herald of the Gospel, the greatest missionary of all times. Someone calculated that Paul covered 20,000 kms. over land and by sea. But his greatness…