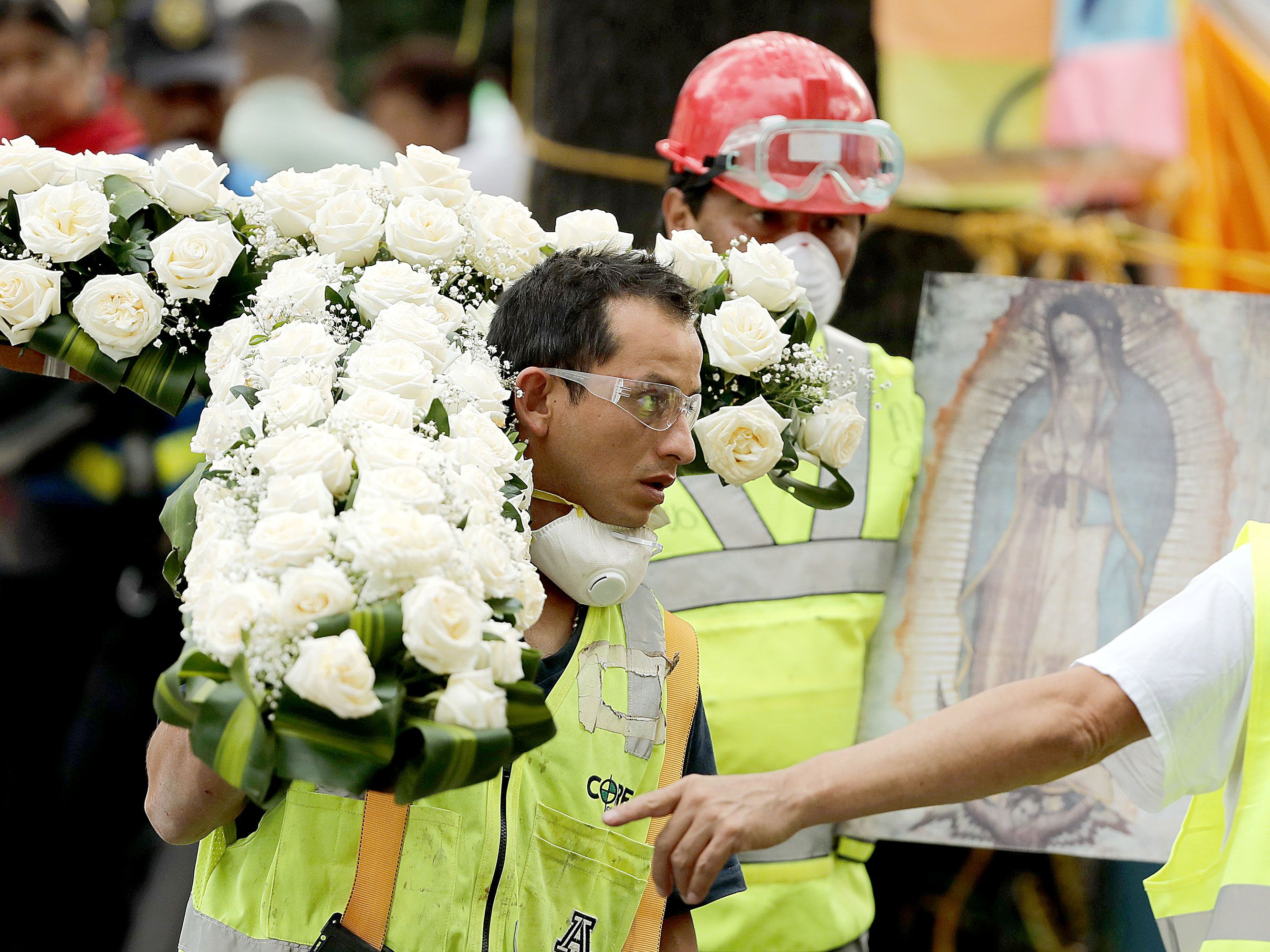 No strangers to natural calamities, Mexicans once again had to pull up their human resources to face head-on the latest devastating earthquake that brought the country to its knees. In times of crises, the words of the Virgin of Guadalupe echo in the hearts of people as an assurance and consolation.

Shock and grief, sorrow and relief, impotence and disbelief were some of the feelings Mexicans experienced on September 19, 2017. According to the US geological survey, at 2:14 pm eastern time, a magnitude 7.1 earthquake hit the central Mexican region, killing 369, injuring 4,500 people, and affecting about 28 million people in three states.

The nation was struck, for a second time, on the same date, 32 years apart. In 1985, a magnitude 8.1 earthquake hit Mexico City, leaving 10,000 people dead, 30,000 injured, and thousands homeless. These two devastating earthquakes brought the country to its knees. They leave a huge scar in the heart of the nation. Victims had a difficult time processing the tragedy.

Mexico is familiar with suffering. Tragedy and desolation were present at the birth of this nation. After the defeat of the Aztec capital, in 1521, the great native nations fell into profound darkness and depression, as they saw their religious and cultural cosmos collapse, “temples and gods fell before the conquering power.” Sadness and despair seized their minds and hearts as entire populations were tragically decimated and others were wracked by disease.

A video on social media showed the story of a young boy rescued from the rubble of a school. After the quake, he remained under shock. His sleeping, eating and relational patterns were altered, and his mother feared that the post trauma stress would be long lasting. But she took him back to the destroyed school, and volunteered with him to help clean up the rubble. The child gained a sense of worth, becoming a protagonist, rather than victim, and his life gained a renewed sense of purpose.  And he was healed.

A Way of Recovering
This is what the Virgin of Guadalupe did when she appeared in the capital of the Aztec empire; the indigenous populations were going through a post-traumatic distress. Our Lady of Guadalupe showed Mexicans a way of recovering from the trauma in her approach to Juan Diego. According to the Nican Mopohua, the Virgin appeared to an indigenous peasant in 1531, in the Tepeyac Hill, to the north of Mexico City. Speaking nahuatl, the Aztec language, Guadalupe asked the Indian Juan Diego that a church be erected in her honor to “listen to their weeping, their sadness, to remedy and to cleanse and nurse all their different troubles, their miseries, their sufferings...”  With that task, the lowly Juan Diego, was lifted up and became the spokesperson of the “Lady of Heaven.”

Taking on the color of the lowly classes, Guadalupe displays elements of the Indian worldview. She revealed herself as the mother of the true God by whom one lives. The dark-skinned Virgin, declared patroness of the Americas in 2002 by Pope John Paul II, spoke to the heart of the nation in their native language, “am I not here, I, who am your mother? Am I not the source of your joy? Are you not in the hollow of my mantle? In the crossing of my arms? Do you need something more?”  Her message is clear. God does not abandon His people.

A National Symbol
Guadalupe is encoded within the DNA of the nation. She is more than just a religious icon. Since 1531, the image, miraculously imprinted on Juan Diego’s cloak, has been at the forefront of Mexican history. La Lupita has been present in the most important historical landmarks. Her dark skin blend of Aztec and Spanish heritable, as well as her humble attitude and pious gesture, has given a sense of identity, unity and pride to the Mexican people. Guadalupe is a national symbol, a national emblem. Her image has been taken as a banner to herald the cause of the oppressed native populations, and has been the flagship in the struggle for liberation and hope.

Our Lupita is in every home. In the aftermath of the 2017 earthquake, Mexico turned to her. Once more, the afflicted nation needs to be lifted up, they need her maternal embrace, need her compassionate and merciful gaze. Mexicans need to hear her reassuring voice. They need to become protagonists.

Mexicans were hit as a nation and stand as a nation. During and after the event, people struggled to connect, reach out and get priorities straight. Media outlets helped connect people, reassuring family members of safety and love. When uncertainty strikes, people are faced with priorities. Love matters. A single life matters, regardless of gender, age, race or social status.

There is a sense of unity and purpose. Rescue squads, volunteers, churches, and communities joined hands to reach out to affected families in the devastated zones. Mexican and international personnel worked tirelessly and nonstop, to search under the rubble to save the lives of people they had never  met. There has been an outpouring of aid, concern, solidarity and spiritual closeness.

Comfort in the Virgin of Guadalupe
In times of sorrow and distress, this nation has found solace in the Virgin of Guadalupe. In her shrine, a sacred place of long standing, she promised “I will give him [Jesus] to the people in all my personal love, in my compassionate gaze, in my help, in my salvation, because I am truly your compassionate mother, yours and of all the people who live together in this land. And of all the other people of different ancestries, those who love me, those who cry to me, those who seek me, those who trust in me.”

In their journey to recovery, Mexicans hold fast to their faith and seek the protection of our Lady, confident in her words, “Listen, put it into your heart, my youngest and dearest son, that the thing that frightened you, the thing that afflicted you is nothing. Do not let it disturb you. Do not fear... any sharp and hurtful thing. Let nothing else worry you, disturb you.” Therefore, for as long as La Morenita, our loving mother, stands in her House, in the Tepeyac hill, Mexicans will not fear, “though the earth be shaken.” (Psalm 64: 2)