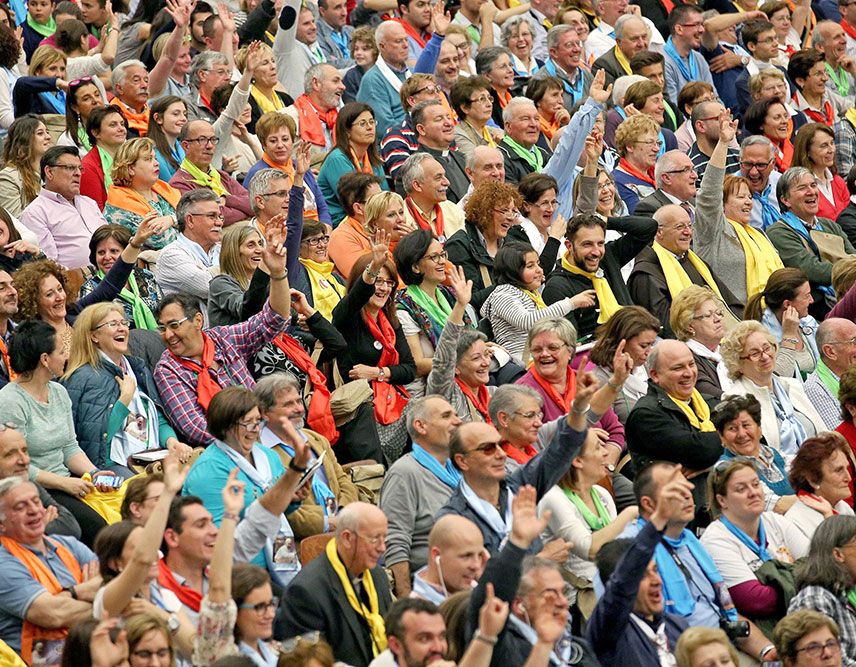 A fruit of WW II in the particular experience of the Church in Spain is this original catechetic initiative which has conquered the Christian world and appeared in countless adaptations in more than one hundred countries.

In the Cursillo movement, being “in colors” is to be in God’s grace. For that reason, Cursillo participants (cursillistas) greet each other with the phrase “De Colores” (in colors). A story from the early days of the movement in Spain tells of an occasion where a group of men were returning from a Cursillo weekend when their bus broke down. They began to sing De Colores, a traditional folk song, to wait for the help that was on its way. The use of the song in Cursillo took hold, and has held up as the movement has spread outside the Spanish-speaking world and to other denominations. The use of a multi-colored rooster as a symbol for the Cursillo movement is believed to have originated from one of the verses of that song.

The Cursillo Movement came to birth in the movements of renewal that preceded the Second Vatican Council. Vatican II was itself born out of an effort of spiritual and pastoral renewal that had begun years before. The liturgical movement, the scriptural renewal, Catholic Action and other movements of lay apostolate had begun years before the Council.

Everywhere in the Church, people were seeking to find ways of bringing the Church to life in the hearts of men. The Cursillo Movement came from the work of such individuals. The Spanish Civil War had ended in 1939, in the same year WWII began. The years after the Civil War were a time of fermentation in the Spanish Church.

Before the war, a pilgrimage to the shrine of St. James at Compostela had been planned. This spiritual journey to the great Spanish pilgrimage center of the middle ages would provide a time for young men and women of Spain to dedicate themselves in a renewed way to the work of the apostolate. After being postponed several times by the disruption of war, the pilgrimage was finally rescheduled for 1948.

Pilgrim Spirituality
This pilgrim style has marked much of the spirituality of the Cursillo Movement. Preparation for the pilgrimage gave rise to efforts of renewal in the different Catholic Action groups in Spain. The leaders of the young men’s branch, Fr. Juan Capo and the layman Eduardo Bonnin, were the founders of the Cursillo Movement. Together they worked at the task of instructing the young people in Majorca about Christian life. Cursillo is a Spanish word meaning “short course”, usually given in a three-day weekend.

The first Cursillo in the United States was held in Waco, Texas, in 1957. The key figures then were Father Gabriel Fernandez and two airmen from Spain, Bernardo Vadell and Agustin Palomino, who were training with the United States Air Force. All weekend courses were held in Spanish until 1961. That year the first English-speaking weekend course was introduced in San Angelo, Texas.

Today the Cursillos de Cristiandad constitute a worldwide movement with centers in more than one hundred countries. The movement is a member of the International Catholic Organizations of the Pontifical Council for the Laity in Rome.

The Explosive Truth
To explain Cursillo to someone who has never experienced it is not easy. Even for those who have experienced Cursillo, it is still somewhat mystifying. The reason behind the mystery is God. No one can fully explain how God touches each person in His special, unique way throughout the various elements of the Cursillo exercise.

Evangelization is probably the element that comes to mind first. In the Cursillo Movement, they approach evangelization as a natural act of being Christ-like within their daily activities. They realize that while most people would like to live their lives in a Christ-like manner, the pressures of the world often make this difficult.

The Cursillo Movement provides a method and a technique to equip each person with the tools, the mentality, the strength, and the support to make this natural type of evangelization possible.

In 1980 Saint John Paul II addressed the Cursillo members in this way: “You have discovered anew the explosive truth of the evangelical message: God, Father of all, comes to us as we encounter him in Jesus Christ to reunite us through the grace of the Spirit in one family which is the Church. This is the news that all human hearts hope for without realizing it. Therefore, dedicate yourselves more and more to being tireless apostles of this in your environments. My apostolic blessing goes with you as a pledge of this divine grace which enables you to live forever.”

In The Footsteps of Saint Francis

The oldest movement founded by Francis himself, the Third Order Franciscans continues to guide those who want to follow in the founder’s lifestyle in their own lives.

To make husband and wife spend a weekend looking at each other and at their love together with other couples is the simple yet brilliant idea of the Worldwide Marriage Encounter movement.