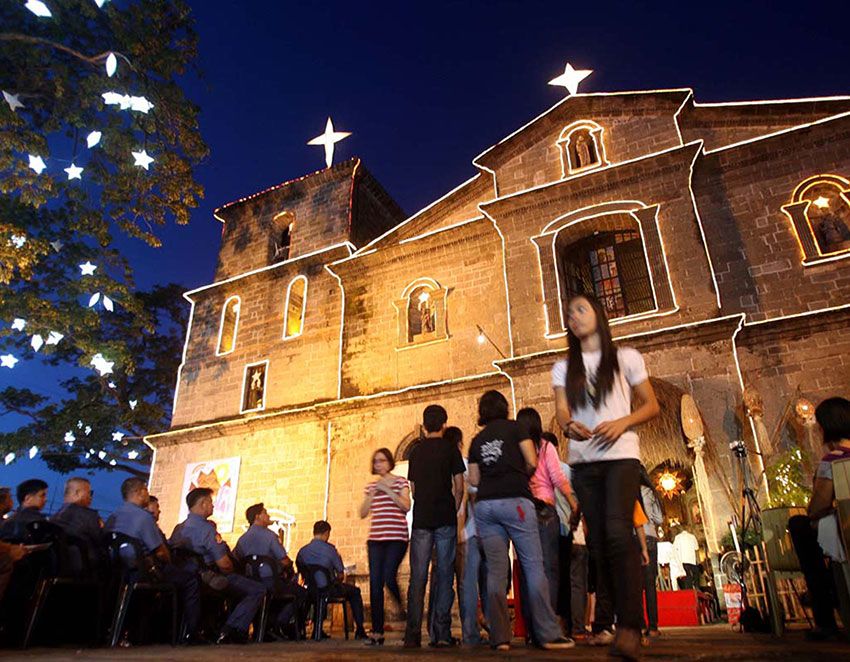 Nowhere else in the world can you witness Christmas celebrations lasting longer than in the Philippines. It starts in September and ends with the Epiphany. Simbang Gabi (“night masses” in December) is one of the main features of the season.

Christmas observances officially start on December 16 and end on the Epiphany, that is, with the commemoration of the visit of the magi to the Child Jesus. But in the Philippines, the Christmas atmosphere begins just when the “-ber” months are ushered in. “-Ber” refers to the last four months of the year whose names end with these letters.

As early as September 1, Filipinos start decorating their homes while department stores and shopping malls begin playing Christmas carols. Both public and private offices do their share of creating a “Christmasy” feeling in their respective workplaces.

A typical adornment in most, if not all, Filipino homes and workplaces is the colourful parol or star-shaped lantern. This lantern is hung outside the front door or window to illuminate the path of the parishioners on their way to church to participate in the early morning Novena masses.

A Nativity Scene, or belen, is a common adornment in many homes. A Christmas tree is also seen everywhere. In many households you’ll find commercially available material; while in others you’ll see trees made out of common objects found around the house, such as broom or maguey flowers creatively designed to make them look like trees.

September is also the start of carolling time for children. They will sing Christmas songs as they move from one household to another, hoping to earn some coins or candies. Adult carollers are also common as soon as the official Christmas season comes in. Godparents, meanwhile, will start making a list of their godchildren so that gifts can be prepared for them.

Misa De Aguinaldo
Being a Christian country, the Philippines commences the official Christmas season with a reverent nine-dawn Mass, called Simbang Gabi, starting on December 16. It is a common practice shared by both Roman Catholics and the Aglipayans in reverence to the Blessed Virgin Mary as she awaited the birth of the Son of God, Jesus Christ. Its liturgical importance stems from the Advent season, the period when Christian believers spiritually prepare and purify themselves for the coming of the Child Jesus.

Simbang Gabi, literally translated as “Night Mass”, is actually held around 4 o’clock in the morning. Its history can be traced back to the latter part of the 17th century, during the early days of Christianity in the Philippines. Since the Christmas season was also a harvest period in the Philippines, it was customary then to hold Thanksgiving prayers in the evenings. But because the farmers would have been too tired from work to attend the novena prayers by this time, the friars decided to set the schedule of the Mass at dawn so that farmers would not miss hearing the Word of God before proceeding to their respective fields. Since then, Simbang Gabi has become unique to Filipino culture and recognized as a symbol of sharing.

Right after the Mass, Filipinos will satisfy their stomachs with various traditional “Christmas food” and drinks sold outside the church. Many small vendors will display their freshly cooked bibingka or rice cake, puto, suman, tsokolate (chocolate drink), salabat or ginger tea, coffee, and other treats. Most of the pastries for sale are made of rice or carbohydrates because farmers have to fill their stomachs before they begin their work at the farm.

Moreover, there’s a centuries-old belief among parishioners that if you make a wish and are able to attend all nine dawn Masses, your wish is supposed to come true. Ironically, though, only the first and the ninth dawn masses of the Simbang Gabi receive the largest number of church-goers.

Filipino Style
Simbang Gabi culminates at dawn of December 24. Then, another Mass on Christmas Eve, called the Misa de Gallo, or Mass of the Gifts, is held shortly before midnight. After this Mass, families get together in their homes for the traditional Christmas Eve dinner called Noche Buena.

Children who have lived apart from their parents due to marriage or studies come home to their parents for this special event. They feast on local delicacies and other traditional dishes, such as a roasted pig called lechon, hamon, pancit, lumpia, fried chicken, fruit salad, spaghetti, and quezo de bola among several other delicacies, depending on the region they are from.

Generally, Christmas is a special occasion that most, if not all, Filipinos look forward to each year, where families get to spend more time together and catch up with each other’s lives.  Published in Wall Street International