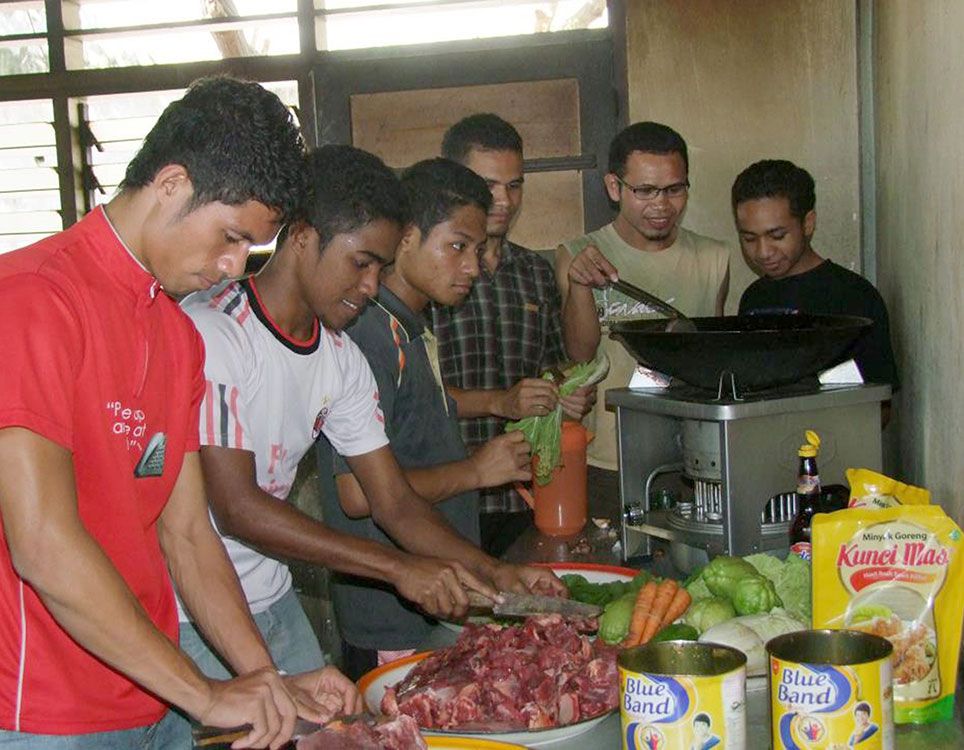 In Indonesia, with its mainly Muslim population, seminaries are overcrowded with candidates. On the island of Flores lies the world’s largest seminary. More than 1,000 students study at Ledalero, and at least 600 of them are candidates for the priesthood.

At 7:30 in the morning, first year students arrive at the Ledalero campus, a short distance from the port city of Maumere. More than 1,000 Philosophy and Theology students are currently registered here, preparing themselves for ministry.

Father Otto Gusti Madung Ndegong, a member of the Indonesian Province of the Divine Word Missionaries, is a lecturer and the rector of the Ledalero Catholic Institute of Philosophy and Theology, where he himself was trained for the priesthood. “This is the largest seminary in the world. We have 1,060 students. More than half of them, almost 600, are candidates to the priesthood,” said Fr. Ndegong.

Several dioceses and 14 religious orders send their seminarians to Ledalero to attend the six-year philosophical and theological training. “Some do not make it to the end, ending up working as journalists, teachers of religion, university professors, or even as politicians. Our Deputy Mayor at Maumere completed his studies at our seminary,” Fr. Ndegong added.

The island of Flores is just 15 square kilometers, one of the smallest in Southeast Indonesia. The 1,600-meter volcano attracts some visitors but the island has not yet been targeted by mass tourism. Flores has a population of just 1.5 million, 90% of which are Christians.

Cooking Skills
Though academic studies are the main focus of the seminarians’ programme, their training also includes learning other skills that might be useful in the future. “We are divided into small groups living in residential units. The rooms are small and furnished with essential furniture. As future missionaries, we live a simple lifestyle. We perform various tasks besides studying. One of them is cooking. We have to learn how to cook. Although it might not be so delicious, we do our best so that we do not feel hungry,” asserts Jhonto, one of the seminarians who expects to be ordained next year.

Before coming to Ledalero, he attended the minor seminary for six years where he completed high school. Since childhood Jhonto wanted to become a priest. “It is my vocation. I want to become a priest and I feel that God calls me,” he further adds. Jhonto’s superiors have already informed him where he would be sent – Liberia, a country in West Africa.

Mingle With People
Early in the morning for three days in a week, the seminary’s truck takes the students to the market in Maumere to do the week’s shopping. Besides buying fish and fresh vegetables, the regular visits to the market are a golden opportunity to be in contact with local people.

“What strikes me is the interaction of our students with the old women at the market place, with the street people, with the youngsters, and with the unemployed. They mingle with people from all walks of life. This is an immersion into peoples’ lives that we want to instill in our seminarians so that they get used to knowing people’s issues, concerns and problems” says Father Ndegong, rector of the Seminary.

Another component of the training program is the playing of sports as a way to balance the physical and mental aspects of the candidates’ lives. The playing ground is busy for a few days in a week, with young men playing either basketball or football. It is the realization of the classic adage “a sound mind in a sound body.”

Abundance Of Vocations
A nation made up of 17,000 islands, Indonesia is home to 261 million habitants, including hundreds of ethnic groups and languages and an overwhelming Muslim population (87.2%). The other faiths form a minority with the Catholic Church, constituting about 3% of the population that comprises eight million Catholics divided into 37 dioceses.

The miracle of vocations occurs mainly in the archipelago of Las Flores, considered “the Catholic heart of Indonesia” because of the high concentration of Indonesian Catholics.

The seminary of Ledalero has already produced nearly 10,000 priests, including 10 bishops. No wonder the seminary receives requests from all over the world whenever there is a shortage of priests. Former students from Ledalero are now working in over 50 countries. “The abundance of religious and missionary vocations in Indonesia can be traced back to the work of the missionaries over the years,” says Fr. Lukas Jua, the Provincial Superior of the Divine Word Missionaries.

“The presence of missionaries among the poor people in the villages, in remote areas with difficult accessibility and no transportation is noteworthy. Their edifying witness attracts young people to become priests,” Fr. Jua added. One of those missionaries is Fr. Georg Kirchberger, SVD, who came to the Philippines 43 years ago and is now the last German priest lecturing at the seminary.

Women’s Shelter
The Divine Word Missionaries support a women’s shelter where many women who have been victims of domestic violence seek refuge. Here, children, young women and mothers find protection and receive support. Fr. Ignatius Ledot, an SVD lecturer at Ledalero, accompanies seminarians to the project every week. For them, it is an encounter with deep suffering. They read the Bible with the women, comfort and encourage them to make a fresh start.

“In the past, people here used to think that priests only celebrate mass and pray. Nowadays, however, there has been a change of mentality that accepts that priests must also be involved in social issues and work for the welfare of the community,” Fr. Ignatius added.

“Like Jesus, Christians are sent out to care for the sick and vulnerable people of society. Priests should be in the frontline of this service, either by delegating the laity or by being directly involved themselves,” he asserted.

“Some time ago, a man wanted to kill a girl. I was called in together with another priest and nun to rescue her. We did so and brought her to the shelter.” Fr. Ignatius shared.  “We go out to the poor, the marginalized groups because of Jesus’ option for the poor. I remember Pope Francis’ saying – the Church can be only converted by the poor – that means the main reason we go out to the poor is not to help them but because the poor can convert us from being a triumphant Church to being a serving Church,” explains the rector of the seminary.

Practice Theology
These seminarians practice theology every week. Accompanied by their lecturers, they visit the overcrowded prison in Maumere. Initially built to hold 75 inmates, nowadays it is congested with 165 inmates. Each cell accommodates between five to eight men who sleep on the floor. Most of them have committed domestic violence crimes. The inmates are invited to come into the prisoners’ chapel that was recently decorated by a young man who was sentenced to ten years in  prison.

Respectfully, the prisoners gather together with the seminarians and priest around the table of the Eucharist. It is a challenge as they try to make sense of the sacrament as a beacon of hope and comfort for the prisoners.

The seminarians are present in their midst with the aim of garnering their trust and eliciting openness and sharing of their lives. “It is a formative action for our students as they insert themselves in this type of apostolate in which they make a clear option to stay with the poor and marginalized. Hopefully, they will do the same when they become priests,” says Fr. John, a lecturer at the seminary who accompanies the students.

Missionaries
There is a requiem mass at the cemetery of the Divine Word Missionaries in memory of a former teacher at the seminary. Grave stones of the first missionaries from Germany and Holland who came to Indonesia to preach the gospel abound in the burial grounds.

Today the situation is reversed; young Indonesians prepare themselves in Ledalero to go to countries where Christian communities are scarce and where there is a shortage of priests. Nobody knows how long this miracle of Flores will continue, but the young men are preparing themselves for ministry and learning the valuable lesson that a missionary must live close to the people he serves.

A nation descending into chaos

Feats of violence and blood are tainting the province of Kasai which has sided openly against the re-election of outgoing President Kabila. Church buildings, including the Bishop’s House and the…

The Asian Youth Day (AYD), a major event of Asia’s Catholic Church, is taking center stage in Yogyakarta, Indonesia. Some 3,000 young people from 29 Asian countries are expected to gather in the…