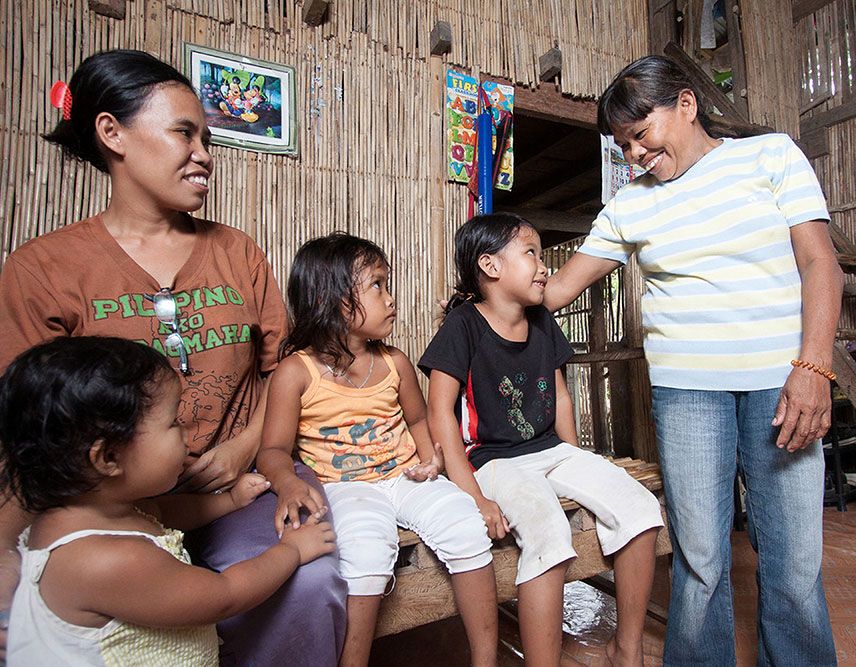 Passing On the Faith to the Young

The Catechism for Filipino Catholics (CFC) describes the Filipino faith as family-oriented. It is in the family that Filipinos draw their identity, strength, security and even their future. The young are introduced to religious traditions and cultural values at home.

A distinctive characteristic of the Filipino faith, besides being family-oriented, is its being a people that are meal-oriented. (CFC, n. 37) Said characteristic of faith also points to the family as a venue for daily gathering and opportunity for sharing stories. Also, children witness the sacrifices and even the expression of poverty of their parents as they go out of the country to work. (CFC, n. 39)

The parent-child relationship is vital in the life of the family. In such manner, it leads to a deeper understanding of how the child grows in the maturity of his/her faith through the parents.

Normally, the family at home prepares the child to know him/herself and to make sure that the future is anchored on real commitment in life. The papal exhortation, Amoris Laetitia (AL) states that “those best prepared for family life are probably those who learned what family life is from their own parents, who chose each other unconditionally and daily renew this decision.” (AL, n. 208)

Experiences in the family become a “journey of faith… wherein it becomes a special opportunity to rediscover and deepen the faith received in Baptism and nourished by their Christian upbringing.”(Familiaris Consortio, n. 51)

Vatican II Gaudium et Spes (GS) and the Apostolic Exhortation of Pope John Paul Familiaris Consortio (FC) complement the idea that speaks of the “family as a school of humanity” (GS, n. 52) and as such, the family is considered as the “place of origin and the most effective means for humanizing and personalizing society.” (FC, n. 43)

Though the young are made aware of the seasonal religious practices and traditional values in the family, they too are confronted with the different challenges the world offers.

In Christus Vivit (CV), Pope Francis describes the church as facilitator of the “culture of encounter” (nos.169 and 214) with God, wherein individuals and families recognize the mysteries of God through the sacramental signs and different expression of faith through “popular spirituality.” (Evangelii Gaudium, n.124, later EG)

In the parish, the “Christian families, by the grace of the sacrament of matrimony, are the principal agents of the family apostolate.” (AL, n. 200)

Passing On The Faith
Amoris Laetitia nos. 287-290 has extensively proposed to us different ways of transmitting the faith to the next generation in an orderly process. “Couples and parents should be properly appreciated as active agents in catechesis. Family catechesis is of great assistance as an effective method in training young parents to be aware of their mission as the evangelizers of their own family.” (AL, nos. 287 and 309)

Considering the pedagogy of teaching, (CFC, n. 288) the parents are facilitators of the faith expression and growth of the children, assisting the whole family in its evangelizing mission. (CFC, n. 289) As a family of families, the Church’s pastoral care for families enables them to be both domestic churches and a leaven of evangelization in society. (CFC, n. 290)

Present Day Obstacles
Pope Francis proposes the pedagogy of questioning as a way to confront our faith as well as to deepen our understanding of the signs of the times. (AL, n. 2; CV, n. 279)

I must confess that I have no empirical data to substantiate my conclusion in view of answering the aforementioned questions. However, in the recent document of Pope Francis on the youth – Christus Vivit – the Pontiff sought our assistance “for greater analysis and the development of a more adequate and effective ability to respond,” to three pastoral concerns. (n.85) I suppose these issues affect the whole family in transmitting the faith of today.

1. The Digital Environment
One of the activities slated during this Year of the Youth is the pastoral visitation of the Archbishop in all 37 Catholic schools in the Archdiocese of Lipa. It is worth noting that in my dialogue with the students, parents and administrators, internet addiction among students is a glaring pastoral problem. Mobile Legends - an online multiplayer battle mobile game - has been a familiar pastime if not an “addiction” among our students.

It has been an obstacle to not only in education but also in the transmission of the faith, for “digital media exposes people to the risk of addiction, isolation and gradual loss of contact with concrete reality.” (CV, n.88) Pornography distorts a young person’s perception of human sexuality. (CV, n. 90) The proliferation of fake news is the expression of a culture that has lost its sense of truth. (Relatio Finalis n. 24; CV, n. 89)

As a result, Christus Vivit has introduced the terminology “digital migration.” It is defined as a “withdrawal from their families and their cultural and religious values, and entrance into a world of loneliness with the result that they feel rootless even while remaining physically in one place.” (n. 90)

2. Global Migrants
I remember the intervention of Cardinal Tagle during the 2014 Extraordinary Synod on the Family. Before Pope Francis and the Synod delegates, he said: “In the Philippines, many married couples separate not because they hate each other. They choose separation because of their love for their family. And they bear the pain of separation to find jobs elsewhere.” Actually, the Cardinal was referring to our Filipino overseas workers. How many of our Filipino parents are out of the country?

Pope Francis, aware of the situation of the world, widens the understanding of migration as “it affects whole populations in different parts of the world.” (AL, n. 46) “Global migration has become a structural phenomenon” (CV, n. 91), where “young migrants experience separation from their place of origin, and often a cultural and religious uprooting as well.” (CV, n. 93)

3. Many Forms of Abuses
“Abuse exists in various forms: the abuse of power, the abuse of conscience, sexual and financial abuse.” (Relatio Finalis, n. 30; CV, n. 98) How about us in the Philippines?

In the three-day reflection process and sharing sessions which drew up a roadmap for the celebration of the Year of the Youth in 2019, the Filipino youth wrote an open letter addressed to the Catholic Church in the Philippines, stating that there is an “apparent distrust and doubt on the credibility of the Church.” (May 31, 2018)

Further on, the said document expresses the desire for a model of an exemplary Christian life. “Our hearts are open to see and embrace role models who give witness to the goodness of life while rooted in the family. We want our elders to journey with us, to be approachable and not untouchable, to level with us to a certain extent, to walk the talk, and to make us sense that we are all equal.”

I end this article by affirming that the family is still the solid ground in the transmission of faith to the young generation. We only need to “undertake a resolute process of discernment, purification and reform.” (EG, n. 30) Pope Francis invites us to be “bold and creative in this task of rethinking the goals, structures, style and methods of evangelization”(EG, n.33) particularly in the family.