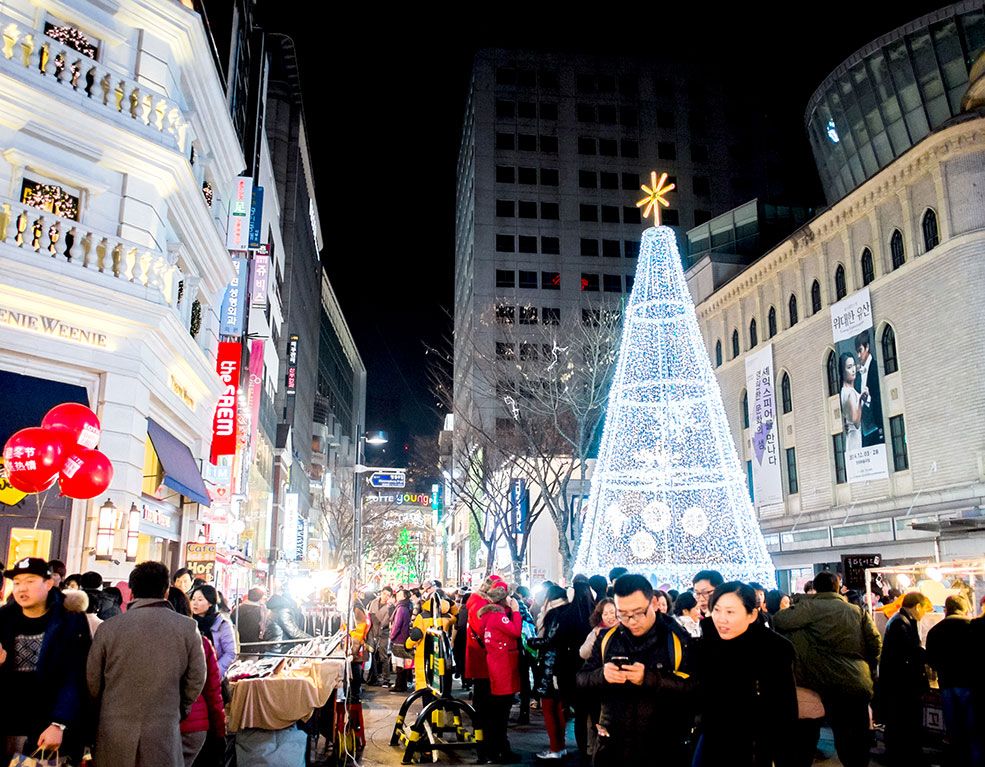 Christianity is relatively new to Asia, but today about 30% of the South Korean population is Christian. Therefore, Christmas (Sung Tan Jul) is celebrated by Christian Korean families and is also a public holiday (even though South Korea is officially Buddhist).

South Korea is the only East Asian country to recognize Christmas as a national holiday, so schools, businesses and government offices are closed on Christmas Day. However, stores remain open and the Christmas holiday doesn’t usually anchor an extended winter break, as it often does in other countries and cultures.

South Korean Christians celebrate Christmas similarly to the way the holiday is celebrated in the West, but with less emphasis on presents and decorations and more emphasis on the religious traditions underlying the holiday. In Korea, Christmas is primarily a religious holiday and less an excuse for shopping and sales prices.

In South Korea at Christmas time, some families do put up Christmas trees, people exchange presents, and stores do put up holiday decorations, but the festivities start much closer to Christmas Day, as opposed to in early November, as is common in the United States.

Christmas lights and decorations are common in Seoul, the capital of South Korea, and major stores put up large light displays.

Grandpa Santa is popular with children in Korea (he’s known as Santa Harabujee), and he wears either a red or blue Santa suit. Kids know him as a happy grandfather figure who gives out presents, and stores employ Santas to greet shoppers and hand out chocolate and candies.

People in Korea usually exchange presents on Christmas Eve, and instead of piles of presents, one present (or a gift of money) is customary.

Foods And Meals
Some families celebrate Christmas with meals and gatherings at homes, but Koreans also celebrate Christmas by going out. Restaurants are busy on Christmas, as it is considered a romantic holiday for couples (much like Valentine’s Day), and theme parks and shows have special Christmas events.

Christmas buffets are popular in Seoul, and many residents reserve their tables well in advance of the holiday. It is possible to find everything from traditional roasted turkey to sushi and crab legs at Christmas buffets.

Many younger people celebrate and party on Christmas with friends and spend New Year’s Day with their families (the reverse to Christmas/New Year’s in the West). For non-Christian Koreans, Christmas is a popular shopping day.  Published in www.learnreligions.com.

Parents’ Impact on Their Children

Parenting entails joys and challenges. A common concern for Christian parents who have to work on those two-fold factors — how to bring up their children religiously (instilling the gift of faith) and…

Prayer is a powerful resource in human life, yet many do not know how to practice it, even finding it burdensome and only turning to it as a last resort. A sincere longing of the heart for God lies at…