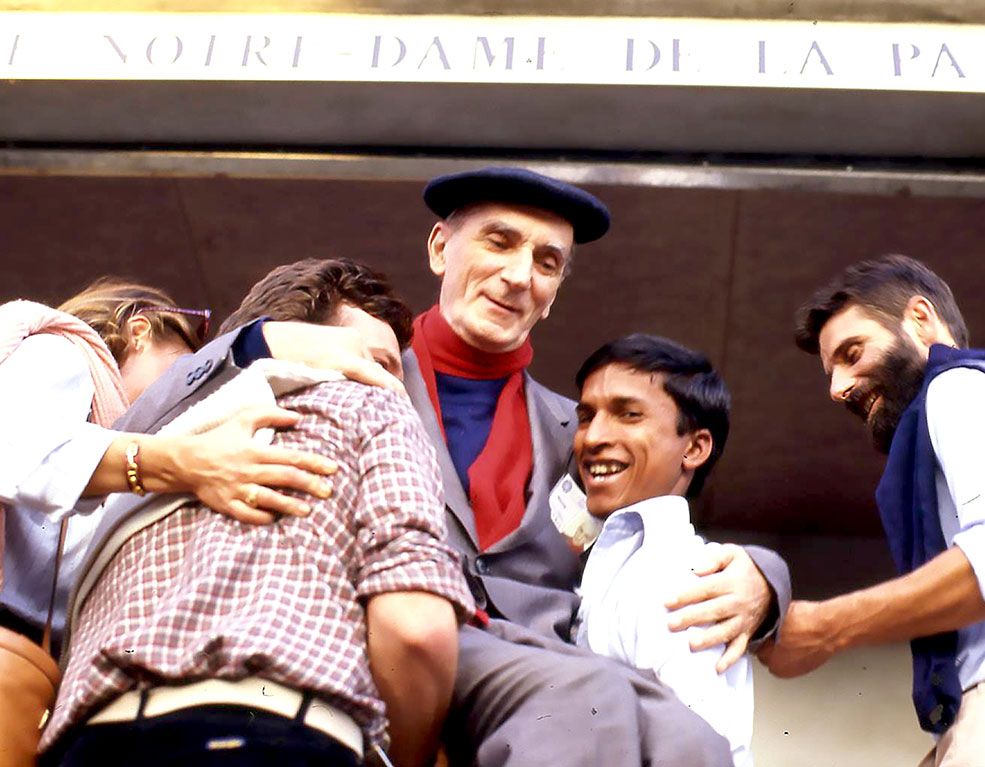 Pierre Goursat was 58 years old when, in 1972, he experienced “the outpouring of the Holy Spirit” and founded the Emmanuel Community. In the spirit of Vatican II, he helped form a new generation of lay people and priests in the service of the Church. He was a pioneer of the “New Evangelization.”

He was born in Paris, France, in a middle class family in 1914. Pierre’s parents were not a happily married couple. Their worlds were very different from each other. After quite a short time, the couple split up. From childhood, Pierre was deeply wounded by his mother’s suffering and by the absence of his father.

He derived his strength from a deeply contemplative life. Pierre called himself an “adorer” because he spent long hours and even entire nights in adoration of the Blessed Sacrament. All the same, Pierre Goursat did not have a saintly aura about him; he had his limitations and weaknesses. He was a film critic and, as a consecrated layman, he decided to serve the Church.

His life was not easy; he struggled with tuberculosis from the age of 19. Aware of his limitations, he stressed the need of accepting people without judgement. There is only one rule in the Emmanuel Community: not to criticize.

Pierre left the leadership of the Community in 1985, and from then until his death in 1991, the rest of his days were spent before the Blessed Sacrament.

Commitment To Adoration
In the Emmanuel Community, all members–whether priests, married, single, or consecrated in celibacy–have the same requirements: daily adoration of the Blessed Sacrament of one hour, if possible; daily Mass, if possible; joyful morning praise to start each day with gratitude to our Lord; regular Confession; and praying for one another.

Committed members also tithe according to their ability, and serve the Community with their time and talent. It basically means they strive to live out their specific vocation (married, single, consecrated or holy orders) to know, love and serve God by serving others.

They can, however, only strive for holiness when they are accompanied on this journey by other like-minded brothers and sisters. They receive in abundance through community life (in prayer and sharing) so that, in return, they may go out and be the light of Jesus to others.

Community Companionship
On the local level they regularly gather in small groups (households or “maisonee” from French). Members confidentially share the experiences of their lives by reflecting on how God’s Word has touched them and how they seek to evangelize. Companionship is a form of spiritual guidance that is provided to all members of the community.

Each member is assigned another member to help guide him/her in their community life. Companions do not provide spiritual direction but rather are friends that help and pray with them along life’s journey towards holiness, in the context of their specific vocations.

Apart from street or door-to-door evangelization, the following are some of the socio-religious initiatives of the members of the Emmanuel Community: Mercy Nights, an evening of music, prayer, and adoration with testimonies; Zacchaeus Courses on the social teaching of the Catholic Church; Love & Truth Sessions, a school for married couples to help them discover Christ and the profound meaning of the Sacrament of marriage.

Mission Outreach
There is also the SOS Prayer, a service that provides an anonymous place where people can e-mail prayer requests to a group of prayer warriors; School of Adoration, a program that teaches adults, youth or children how to adore the Lord based on Scripture and the teachings of Saints.

The Emmanuel Schools of Mission offer a nine-month program devised for students to learn about their faith, live in community, and prepare and execute parish and school missions. Currently, the Community runs several schools of mission throughout the world like in France, Germany, Italy and the Philippines.

A creature of the Emmanuel Community is Fidesco, an NGO for international solidarity which sends volunteers to countries in the South to put their professional skills at the service of development projects to help local populations or humanitarian causes.

Paray-le-Monial is the main center of the Community, located in Bourgogne, France. At present, the Emmanuel Community has 11,500 members in 67 countries on five continents. Among these, there are 270 priests, about 100 seminarians and 200 lay persons, male and female, living in consecrated celibacy.

Because the Emmanuel Community is unique in that it welcomes all states of life, it also provides the opportunity for young people to discern the call of consecrated life in celibacy for the Kingdom, for both men and women or priesthood for young men.

Famous for its penchant for using the terminology of the Roman army, this movement is among the oldest. Today, its members total over ten million worldwide, making it the…