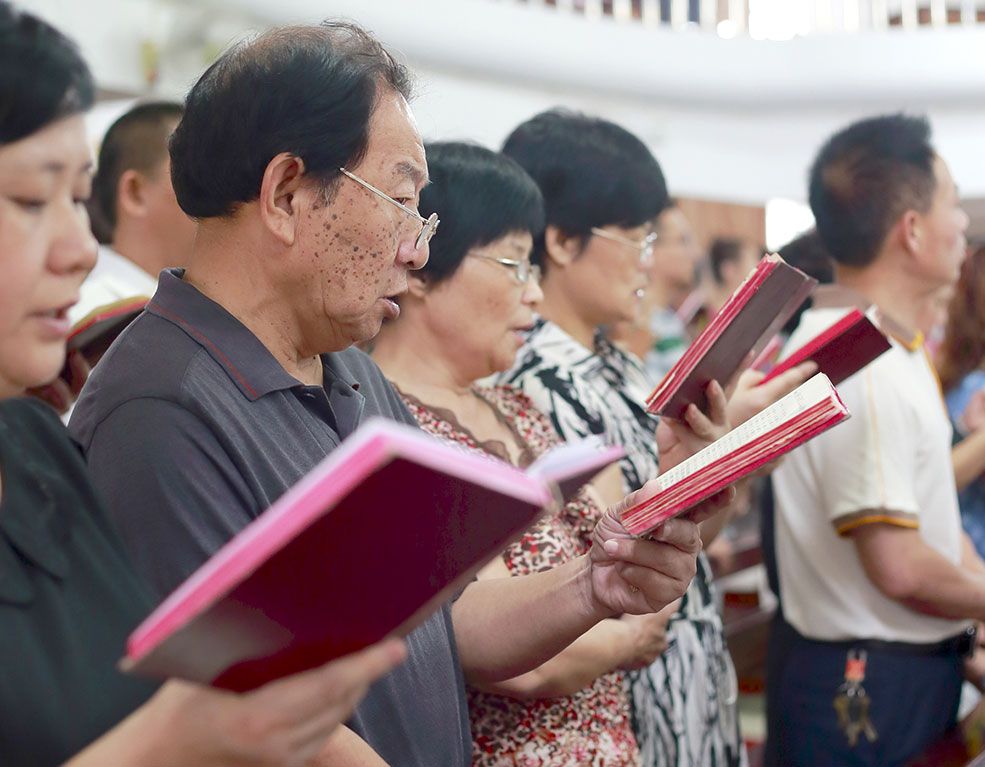 Francis Paul Yang is a 27-year-old Chinese man who received baptism on the Solemnity of the Assumption of Mary (August 15) in a parish on the outskirts of Shanghai. Francis Paul recently graduated with a master’s degree in philosophy from the prestigious University of Nanjing. After taking various tests and exams, he was offered a job at a renowned Shanghai publishing house specializing in the publication of classics.

His spiritual struggle lasted for many years. Eventually, the hand of the Lord led him to that “Yes” that his soul yearned for, albeit unconsciously. Perhaps, even from his birth, as in the words of the prophet Jeremiah: “Before I formed you in the womb, I knew you” (Jeremiah 1, 5). Here below, you can read Francis' testemony of his faith journey.

I was born in 1993 into a simple Anhui family and raised in an atheist environment. In the first two years of university, I was a total secularist and hedonist without any great aspirations, and I led an absurd and dissolute life. On September 5, 2013, suddenly and without any warning–as if enlightened, I realized that I no longer wanted to live without a specific purpose. Looking back now, I see without any doubt that it was God’s grace that had taken hold of me.

So I started studying philosophy on my own in an attempt to understand what wisdom is. The first school I came into contact with was modern Western philosophy, which soon revealed itself to be nothing other than poor speculation, an abstract rationalism removed from real life. It was not what my heart yearned for and so I leant towards the so-called “knowledge of life,” or Chinese philosophy, in particular Confucian philosophy. God often leads us on a winding path so that we can truly feel his omnipresent Divine Providence.

St. John Paul II And Benedict XVI
What fascinated me most among the Confucian philosophies is the study of Zhu Zi. It is through him that I encountered Saint Thomas Aquinas, and thanks to him I found the divine and holy truth of the Church. Moreover, the respect that Catholicism shows towards tradition and the saints, its profound critical commitment to modernity, and the example of mercy given by the popes St. John Paul II and Benedict XVI was in perfect harmony with my personal experiences and what I had previously studied, and it exerted a deep fascination on me.

At a deeper level, I must say that this attraction nevertheless remained superficial; it was a preparation for the grace of faith that God gifts us, for the call to conversion to Him.

Initially, I did not really understand this and I tried to merge the tradition of Catholicism with  Chinese tradition through my efforts. Such attempts caused great suffering and in the end have proven to be in vain. Despite the commonalities between the two traditions, there are insurmountable basic differences which, once applied to daily life, are in net contradiction, and thus generate confusion.

Only at the end did I manage to understand: What the Lord asks me to do is not to integrate or merge these two great systems, but obey [Him]; not forcing myself according to my personal will to carry out a total transformation, but learning to be humble, allowing God to lead me into this forest that is life.

Despite this, these spiritual difficulties have their positive aspects. This is what modern man, born in another tradition, must face when he wants to approach God, as if it were a test.

Then, there were also some events in my life–those concerning friendship, but also some concerning my family. Through these events, the Lord revealed himself even more to me: It is with the knowledge of this God who emptied Himself out of love, that man deepens his knowledge of his neighbor, loves him, and the poor self.

God reveals Himself through contact with others and in our relationships with people, enabling man to build relationships in relation with Him–Trinity.

Baptism
This was followed again by a long wait: I did not feel ready and I was undecided, so I let go. However, once again the Lord set my life in motion through a concrete person. First of all, I met a brother with whom we started a shared reading group, where we read together the book “Catholicism” by Henri de Lubac.

Thanks to this experience, I had a deeper understanding of communion in God, and after a series of wonderful events, this year, I finally received baptism on the solemnity of the Assumption of Mary. After much reflection and discussions with my spiritual father and friends, I decided to take Francis Paul as my first name.

Francis is the founder of the Franciscan Order, St. Francis of Assisi. I have a particular feeling for the Franciscan order. When I was reading the Biography of Saint Francis, written by G.K. Chesterton, I was profoundly moved by his charisma.

Although it was Saint Thomas Aquinas who first allowed me to come into contact with the truth of Catholicism, my favorite theologian is Saint Bonaventure. Furthermore, the spiritual poverty of the Franciscan order is in turn the charism that I pursue in my daily life: One must first empty oneself, so that the Holy Spirit can enter.

On the other hand, as a modern man through the Middle Ages, I would also like to go directly to the time of the Apostles, in this living tradition. So I chose Paul as my middle name. From the point of view of my temperament, I may actually be closer to John, but Paul’s passionate ways have a complementary function. In any case, I pray that Paul’s missionary passion may ignite and help me to proclaim the Gospel of Christ on Chinese land. To the everlasting praise of Our Lord.  Published in AsiaNews

The Comboni Missionaries heeded the appeal of the Church to come to Asia, the least evangelized continent. They are working in Missionary Animation, Vocation Promotion, and Basic Formation in the…