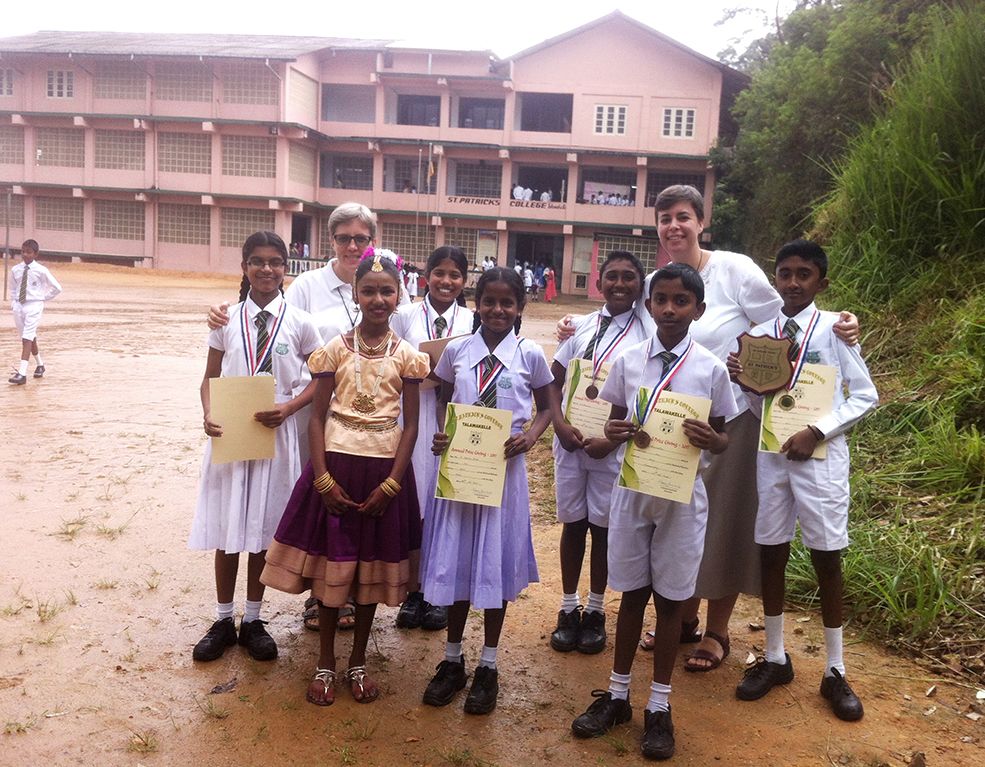 Newly-arrived in Sri Lanka, where Catholics represent around 6% of the total population, the Comboni Sisters have taken up the commitment of education. Besides, the missionary nuns are sensitive to the plight of women who are exploited in the tea industry.

A Comboni Missionary, in Sri Lanka? More than once I have had to respond to this question. Before the 2019 Easter Sunday bombings (six near-simultaneous suicide bomb attacks on April 21, 2019, that targeted three churches and three hotels perpetrated by two Muslim groups that pledged alliance to the ISIS) people had a hard time understanding a missionary presence in one of the trendiest tourist destinations. After the terrorist suicide blastings that caused more than 300  dead and 500 injured, the question comes disguised with a mantle of heroism that has little to do with missionary vocation.

I live in Sri Lanka. I am neither a tourist nor a heroine. I am a Comboni missionary nun at the service of the God of life, sharing every day with the Sri Lankan people.

The first Comboni Sisters arrived in Sri Lanka in March 2012. Monsignor José Vianney Fernando, Bishop of Kandy in central Sri Lanka, visited Dubai and met the Comboni sisters. He saw how our school functioned, how we run the catechetical center, and how we attended to the different migrant communities.

The Bishop wanted us in his diocese after almost thirty years of civil war in the country. Any help was welcome to strengthen education and heal the coexistence between Sinhalese and Tamils, the two ethnic groups at odds.

Sister Libanos Ayele, Sister Quy Thi Dinh, and Sister Nelly Kangogo were the pioneers. They started from scratch on a mission called to live and grow as a minority. The beginning was complex but, with patience and a lot of love for God and his people, they managed to integrate themselves in the daily lives of the people of the central region.

Five Nationalities
I arrived in Talawakelle in August 2017. Only one of the pioneers remained. They all got sick and had to leave one by one. A Polish sister was waiting for me there, Sr. Anna Kozuszek who was still young and had experience in the Persian Gulf. Later, Sr. Patricia Lemus and Sr. Amira Wiliams joined, while Sr. Libanos returned. A community made up of sisters of five different nationalities was called to bear witness to the Gospel with their lives.

I remember the day I arrived at Talawakelle. Instead of four and a half hours, it took us six hours to get to the mission because of the pouring rain. Three years later, every time I make this journey I am still amazed by the majesty of the jungle, the vivid colors of Hindu temples, and the impassive serenity of the Buddhas lying in the middle of the mountain. The nature and religiosity of this town are its best welcome card.

Young and inexperienced, I arrived full of passion and desire to revolutionize everything as soon as possible. Now I am still young but time and people have taught me that in addition to passion, the mission requires patience, perseverance, prayer, and a lot of humility and freedom to know, collaborate, love, and let ourselves be loved by the people who receive us.

Suffering People
Our people here are suffering. They are descendants of the slaves brought in by the British in the 19th century to work on the tea plantations. Due to their Indian roots, many did not enjoy Sri Lankan citizenship until 2003. Despite legal recognition, the Tamils ​​of the central region continue to be one of the communities that suffer the most discrimination and the greatest economic, political, and social inequalities.

The majority of the population depends on the tea industry, either for harvesting or further processing. Behind every cup enjoyed in the Western world are the lives of thousands of women. Sunburned and anemic, women bear the brunt of the tea plantation work under the scorching sun. Humidity favors the presence of animals. Based on greed, the tea industry pays three Euros at best for twelve kilos of tea leaves.

Mission
With eyes wide open to that reality in which life, especially that of women, is exploited, our mission unfolds. We share the joy of working in a diocesan school where Christians and Hindus (students and teachers) try to form good people and honest citizens.

Education is the most powerful tool to break the cycle of poverty and the stigma of slavery. In addition, it is the appropriate place to discover that ethnic and religious differences, rather than being a threat, can be a mirror of the wealth and plurality of the country.

The other pillar of our presence is the parish. More than 1,500 Christian families spread over 60 communities belong to the parish of St. Patrick’s. There is a variety of groups: more than 300 kids in catechesis; Legion of Mary; Divine Mercy group; the group of San José Vaz; and a group of youngsters.

We work in collaboration with Frs. Matthew and Dilan, the two diocesan priests of our parish, and with the Sisters of the Holy Family of Bordeaux. Our Christian community looks like a mustard seed. Despite being the smallest of the religious presences in the country, it has within itself the vocation and the strength to become a tree capable of providing shelter and bearing good fruit.

I thank God and our people for the three years I lived in Sri Lanka. The constant prayer of Buddhists, Hindus, Muslims, and Christians has strengthened my prayer life. The priority accorded to the family in Sri Lankan society has made me value my own even more. The simplicity and poverty with which my neighbors live have led me to try to find what is truly necessary.

The solemnity of some celebrations, the symbolism, the colors, and the smells have made me understand  infinite Beauty. The serene joy of seeing the shyness that quickly becomes confident and many chats with a thousand questions have taught me to appreciate the importance of stopping and talking with people. The suffered life of these people who have been slaves reinforces the promise of Christ: “I have come so that they may have life, and have it in abundance.”

The unshakeable faith of a minority, sometimes persecuted and massacred, confirms that the Church is mother and body; that she is called to come out of the temples and the barriers of fear and privilege; that even if persecuted, is called to be the announcement of the full Life in Christ.

Pastora Mira Garcia is best-known in Colombia for her example of forgiveness in the face of hatred and violence. In September 2017, when Pope Francis visited the country, Pastora was chosen to narrate…

The Comboni Missionaries heeded the appeal of the Church to come to Asia, the least evangelized continent. They are working in Missionary Animation, Vocation Promotion, and Basic Formation in the…