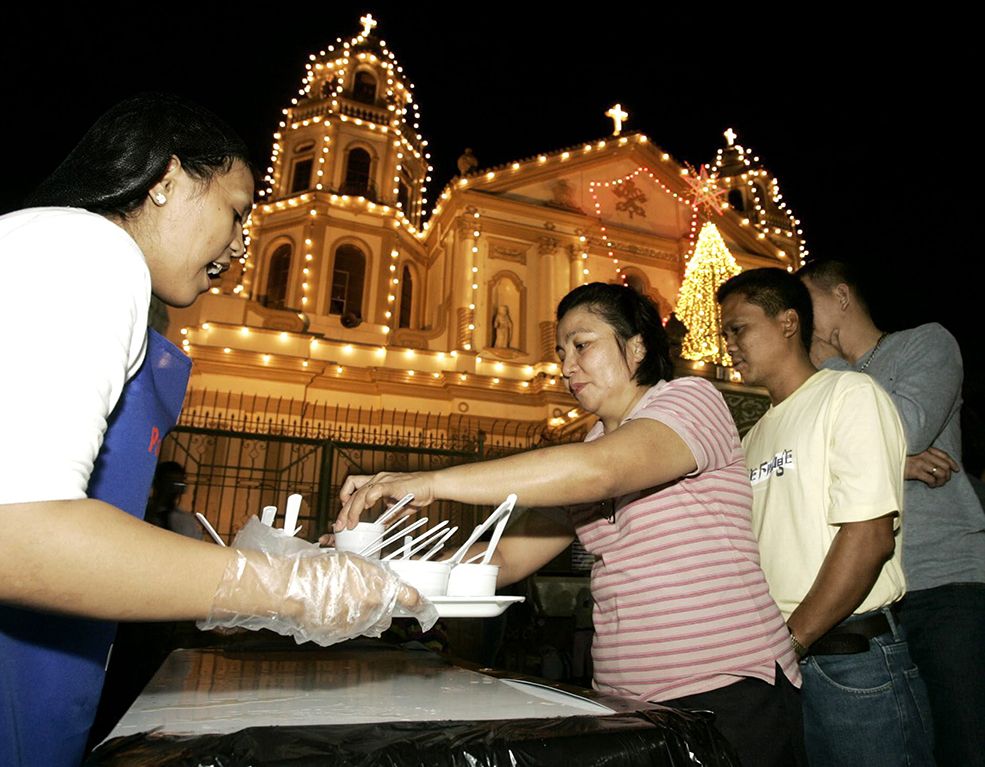 Church bells chime with one of the traditional Christmas songs signaling the special birthday of the Infant Jesus. “Silent night, holy night! All is calm, all is bright. Round yon Virgin, Mother and Child, Holy Infant so tender and mild. Sleep in Heavenly Peace, Christ the Savior is born.”

Once the calendar rolls to September, Christmas is in the air for the Philippines. Christmas carols can be heard everywhere. There are ad jingles. Holiday songs are on radio. Christmas decorations and caroling. Christmas lights to fill up the nights with the simoy ng hangin tuwing Pasko (Christmas cool breeze).

Filipinos are excited for Christmas that we always have a “100 days before Christmas” countdown. The festivities begin to celebrate the birth of Jesus Christ.  Born in Bethlehem, Mary and Joseph seek shelter until they found a manger outside the inn to give birth to. Up to now, we have kept some of the traditions of Christmas.  It includes gift-giving that started with the Three Kings, the Belen, the Parol (Christmas Lantern) amongst Filipinos, and a whole lot more.

Simbang Gabi
The most distinct Filipino Christmas tradition that we have is the Simbang Gabi,  an early morning nine-day Novena of Holy Masses right before Christmas.  Also known as Night Mass, devotees would attend and say their prayer intentions and thanksgiving. It takes perseverance to  get up early to be able to attend all the Mass. This tradition is practiced among Filipino Catholics and Aglipayans. Puerto Ricans also observe this as Misa de Aguinaldo.

Aguinaldo for Filipinos has a different meaning.  It refers to gift-giving to children either by their Ninongs and Ninangs (Godfathers/Godmothers). The gifts are either in cash mostly tucked in mini-red envelopes from Chinese heritage or any gifts like toys or the latest cellphones or gaming device, and other material things.

Western culture has also highly influenced one of the Filipino traditions we have with Santa Claus. Establishments would normally have Santa for the children to pose and take pictures with.  The whole family would stay up all night on Christmas Eve. The next morning on Christmas day, the kids are delighted to find the presents that Santa placed for them at their home’s Christmas tree whether they were naughty or nice.

We also have the traditional Kris Kringle (Secret Santa) also known as Monito/Monita, one of the gift-giving ways amongst Filipinos of exchanging gifts. This is often practiced in schools, among friends, or the workplace.

There would be a theme for the present they would bring.  Like:  “Something big.”  They would then give a gift that is big to the person whose name they picked out.  This theme of gift-giving would go on, quite similar to the 12 days of Christmas, until Christmas day when it is revealed who their Monito/Monita as well as who their “baby” is.

The gift-giving originated from the story of the Three Kings also known as the Magi (Three Wise Men from the East).  In the darkness, they followed the guiding star, the light, to lead them to the baby who will become the Lord and Savior of all mankind.  King Melchor from Persia, King Gaspar from India, and King Balthazar from Arabia brought gifts of  gold, frankincense, and myrrh as their homage to Jesus, the King of the Jews. The Christmas season is celebrated until the Epiphany, the Feast of the Three Kings.

The Guiding Star
Unique to Filipino culture is the parol, Christmas lanterns. The parol symbolizes the guiding star, the light that signifies hope for man’s Salvation with the birth of the Infant Jesus.  Pampanga is well-known for the exquisite making of their parols. At the bayan of Las Piñas, there are also parol makers whose livelihood have been passed on from generation to generation. There are a lot of places in the Philippine archipelago that host Christmas lantern festivals/competitions and in others, a grand Christmas lantern display.

Underneath the Christmas tree, one often finds a replica of the Nativity Scene of the Holy Family. Called the Belen, the Christmas decorations would not be complete without this.  Some homes would also have it on display on their lawns or garden. After all, Christmas is all about the spirit of togetherness when we have family get-togethers to celebrate the birth of our Lord and Savior, Jesus Christ.

On Christmas Eve, we have the traditional Noche Buena. It has already been a custom for Filipinos to attend the Holy Mass either on Christmas Eve or right on Christmas day. The Noche Buena is when the whole family would stay up on the 24th of December. The family will have a feast of fiesta ham, lechon, salad, quezo de bola, spaghetti or noodles, drinks, and fruits. The dinner table will not be complete without other Filipino delicacies. If Mexicans have castañias, we, Filipinos, have rice cakes called puto bungbung and bibingka. They would bring it home right after the Christmas Eve Mass.

Pope Francis, elected as the 266th pontiff in 2013, is now in his tenth year of service. Enriching the Church, his insights cover a broad range of topics, including climate change, migrants,…

Let the Youth Grow their Roots

Faced with challenging times brought about by the pandemic, the youth nowadays are treading on a new path where they make decisions not only on what they want in their lives but also on the way it…

As deforestation sadly continues everywhere in the world, its consequences such as drought, soil erosion, and global warming to name a few, are heavily felt. Thus, it is important for all nations to…