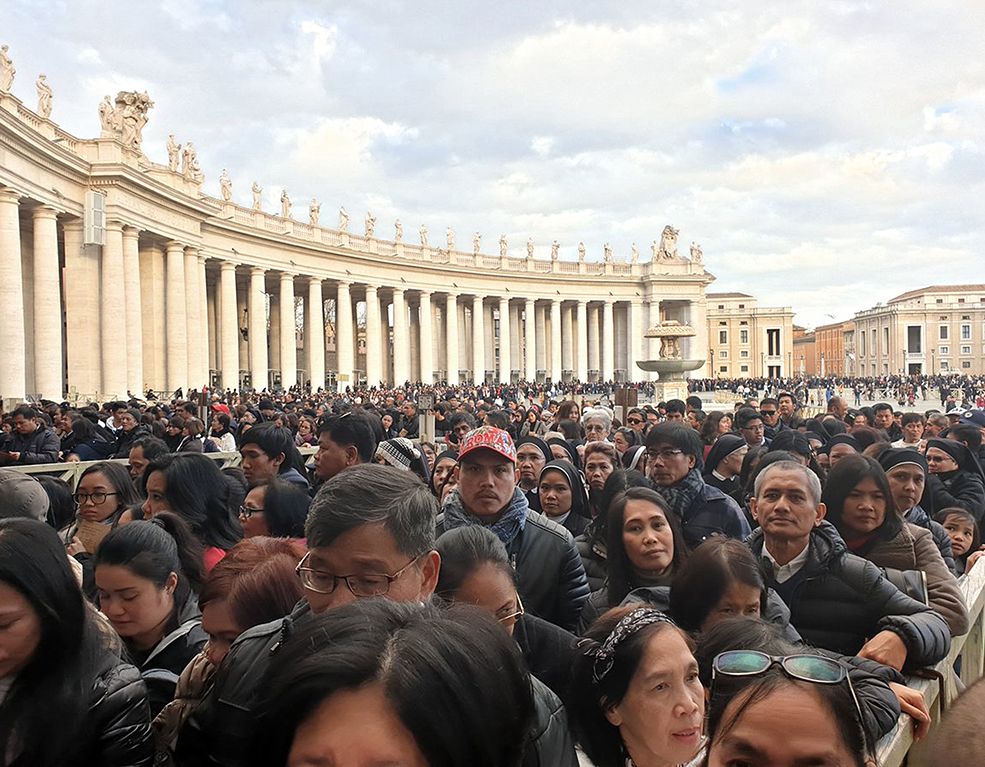 Mission To The World

The more than ten million Filipinos abroad carry around their Catholic faith with their special way of praying and celebrating. In this way, everywhere, they are reviving the local churches where they worship.

On Gaudete Sunday, December 15, 2019, something extraordinary happened to the thousands of Filipino faithful living and working in Rome. Pope Francis celebrated Mass on the first day of the Filipino Christmas tradition, the Simbang Gabi or Christmas novena, in St. Peter’s Basilica.

It was the first time that a pope celebrated Simbang Gabi at the Vatican. The Simbang Gabi tradition in the Philippines dates back to the 17th century. Filipinos hang a star outside their homes and attend early morning Masses on the nine days before Christmas.

“In recent decades, thanks to Filipino migrants, this devotion has crossed national borders and has arrived in many other countries. Simbang Gabi has also been celebrated in the diocese of Rome for years, and today we celebrate it together here, in St. Peter’s Basilica,” Pope Francis said.

The pope told the Filipino community gathered in St. Peter’s Basilica that they are called to be “leaven” in their parish communities in Italy and encouraged them to share their “cultural and spiritual wealth.”

Over 170,000 Filipinos are residing in Italy. Fr. Ricky Gente, the chaplain for the Filipino community in Rome, addressed Pope Francis at the end of one Mass: “Almost 500 years ago, European missionaries planted the seed of faith in our beloved Philippines. We are happy and blessed because after five centuries, we are here in Europe and throughout the world transmitting the joy and beauty of the Gospel,” Fr. Gente said.

“Smugglers Of The Faith”
“Yes, it is true, we carry with us everywhere we go the torch of faith and of the Gospel in the world, the same faith, and Gospel that have been transmitted to us. This is why today, here in front of you, you find happy and smiling people because the flame of faith continues to burn intensely in our hearts,” he added. Pope Francis himself had happily called the Filipino Catholic working abroad: “Smugglers of the Faith.”

Christianity has historically struggled to put down spiritual roots in Asia despite missionary presence in China and Japan. So what makes it stick in the Philippines? Much credit belongs to the religious zeal of the Spanish missionaries. But by and large, the faith thrives today because Filipinos appropriated Catholicism to make it their religion.

The Jesuit historian John Schumacher claims “no whole people, at least before the 19th century, has ever been so thoroughly evangelized as were the Filipinos in the history of the Church.” The Christianization of the country was certainly a change of heart of the people; the conversion, however, included a systematic shift in lifestyle.

Various documents of the Catholic Church in the Philippines assume that the Catholic faith is part and parcel of being Filipino. This idea overlooks the presence of other religious minorities in the country. But the assumption makes sociological sense. Catholicism has become a cultural attribute, given the extent to which it affects everyday Filipino life.

At Santa Pudenziana
Every Sunday, at the Basilica of Santa Pudenziana, in Rome, before the noon Mass, the church courtyard is filled with Filipinos, many greeting each other in various languages after a week of not seeing one another. Some have their children along, speaking Italian. There is a stall to one side of the courtyard with volunteers selling arroz caldo (rice porridge), pancit (noodles), puto cuchinta (rice cakes), and boiled peanuts.

A Filipino priest starts the Mass in Pilipino and continues through the singing and the readings. The Mass ends, and all shuffle out, the familiar Filipino languages echoing in the Roman church and even louder as people walk out to a sunny courtyard.

One can attribute the weekly packed crowd to lonely immigrants needing camaraderie with their people. It is, however, more than that.

The Filipinos still seek a sacred space to get some bearing amid the harshness they go through to find peace. This need is answered in the churches they flock to each Sunday. Their sacrifices and suffering are heard and succored by a God Who will seemingly never fail them.

It is the same worldwide where overseas Filipino workers endure countless trials to help their families, far from home. Twenty years ago, I witnessed the commitment of the Filipino community in the parish of Golders Green in London. Their group was side by side with the other national groups like the Italians and Ghanaians.

The local British faithful were already a minority, and the wisdom of the Parish Priest made all groups welcome and foster a warm international atmosphere. It was already a symbol of the Church of the future.

The French missionary served the least, the last and the lost until his death last year. Before his passing, the 101-year-old Jesuit did have a purposeful life after having helped over 800,000…

In the 19th century, violent rebellions against the colonial government involving Church personnel broke out. They were motivated not by insubordination but by strong, legitimate demand for equal…