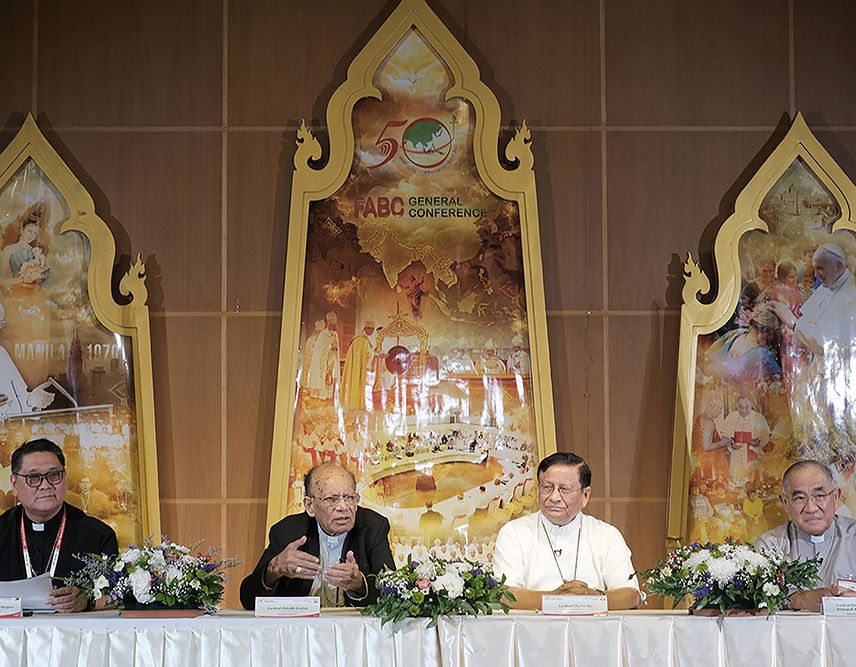 ASIA: Asia Is Taking Its Rightful Place In The Church

The Catholic Church is supposed to be universal and Pope Francis is making that word finally mean something with the recent appointment of a number of Asian cardinals, the region’s top church leaders said.

Speaking at a press conference during the general conference of the Federation of Asian Bishops’ Conferences at the Baan Phu Pastoral Center of the Bangkok archdiocese, Cardinal Oswald Gracias of Bombay (second from left, in picture) said the latest nomination of cardinals shows that “Asia is taking its rightful place in the Church.”

With six new cardinals from Asia, the region’s number of cardinal electors who will choose the next pope rose to 21–five are from India, two from the Philippines, two from South Korea and one each from Myanmar, Pakistan, Bangladesh, Thailand, Japan, Laos, Sri Lanka, Iraq, Indonesia, Mongolia, Singapore, and East Timor.

The continent now has the second highest number of cardinal electors to choose the next pope, after Europe.

DEATH PENALTY: “No Punishment Without Hope”

Pope Francis, in a message sent to an international anti-death penalty event last June, condemned the use of the death penalty, saying it fosters vengeance and does not bring justice to the victims of…

PHILIPPINES: Celebration of The 500 Years Extended

The celebration of the 500th anniversary of the arrival of the Gospel in the Philippines (1521-2021) has been extended for another year due to the coronavirus pandemic.