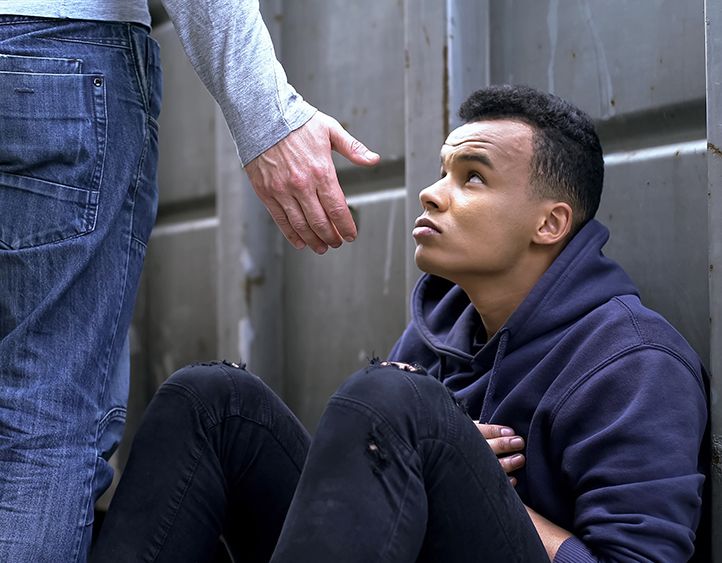 Have you ever needed a helping hand? Have you extended needed help without being asked? There are times in our lives when we are unexpectedly shown random acts of kindness. Be one of them. Be a Good Samaritan.

Luke 10:25-37 talks about Jesus narrating the story of The Parable of the Good Samaritan.  “Which of these three do you think was a neighbor to the man who fell into the hands of robbers?  The expert in the law replied, ‘The one who had mercy on him.”

In today’s modern times, we feel blessed when we are shown acts of kindness by strangers.  When we least expect it, people extend their helping hand to us.  It is these little blessings that make us thankful to continue doing good.

Years ago, my brother rode the bus. He was in such a hurry. He did not want to be late for work.  In haste, he took the bus that was full of commuters.  He was holding on to the handlebar while standing.  But the bus driver slammed on the brakes and the bus suddenly stopped. My brother lost his hold and in agony, gripped in pain.

It was so painful for him to move his shoulder. He was still far from his workplace. But a fellow passenger was more than kind enough to give him a helping hand. Not only that, but the stranger also went out of his way to accompany my brother in going to the hospital. Without being asked, he volunteered to go with him. There, he was able to get medical help. His shoulder had to be put in a cast. They did not know each other but the man became the Good Samaritan in my brother’s life. That was a long time ago but when my brother told me what happened to him, all I could feel was gratitude for the anonymous act of kindness shown to him.

My mother is now long retired. But when she was still working, there were a few times when she drove herself or had to ride the jeep. One time, she was crossing a busy street. A young student was suddenly by her side and was holding on to her elbow to help her cross the street. My mama did not expect that. At first, she thought he was a thief. But she was glad that the young man was there to keep her safe.

These everyday stories that we have at the end of each day make us hopeful to count the daily blessings we receive. Knowing this, as her daughter, gave me a glimmer of hope in the goodness of people. I still remember it up to this day.

Difficult times nowadays, especially with the pandemic, have brought out the best and worst in people. Out of poverty, hunger, and greed, people resort to committing crimes. They rob and kill. But God does not let us forget the people who continue to show us what is good in life.

Christ’s birth is a good example of providing shelter to those in need.  Mary and Joseph voyaged far to find a place where they can reside. All the inns were occupied. No rooms were available until they came upon an inn that was able to accommodate them at a stable. It was the only space where they could provide sleeping quarters. It may not have been much but they were able to provide shelter to Mary and Joseph where Jesus Christ was born wrapped in cloths on a manger.

When the Taal Volcano in Tagaytay started to blow fumes in 2020 January onwards, a lot of people had to be evacuated. The evacuation centers were filled.  Other families were already knocking at people’s houses to ask for shelter. There was a family who became Good Samaritans to those who sought shelter. They welcomed them into their homes providing them with not only shelter but food.

What about you?  Can you still recall how a bad day turned out to be good because of people who have randomly shown you or a loved one acts of kindness?  When you are feeling weary and helpless, those times can give you the hope that you need in life to keep on going, knowing that there are still good people, a lot of good people who can far outweigh the bad rotten tomatoes.

When you are at the bottom, look up and count the blessings.  As immeasurable are the grains of sand and the stars are in the sky, the Heavenly Father will keep the Sun shining down on you to fill it with goodness and guidance of God’s love.  As you are shown kindness, keep in mind to also be the Good Samaritan in others’ lives.

Live and give.  Care and share.  As we end 2022 this Christmas, let us keep on living in good conduct and doing charitable acts as we welcome the New Year!

Let the Youth Grow their Roots

Faced with challenging times brought about by the pandemic, the youth nowadays are treading on a new path where they make decisions not only on what they want in their lives but also on the way it…