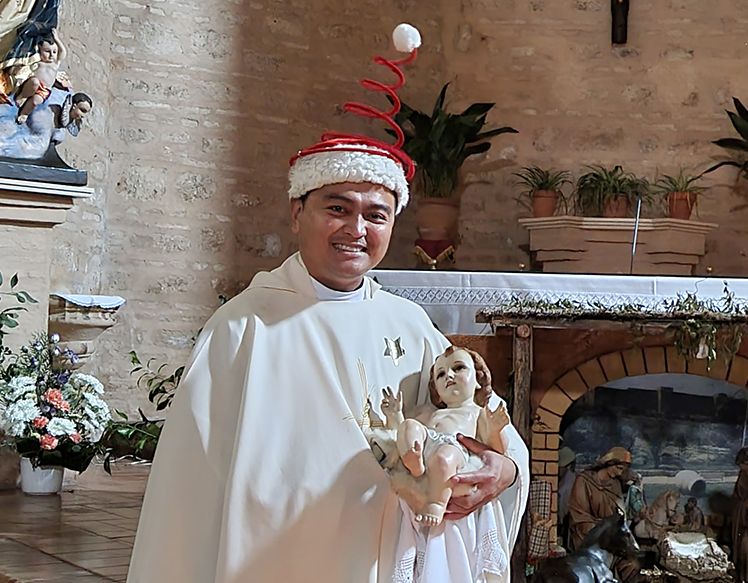 A Journey through the Nativity

The author, a Filipino missionary serving in Spain, draws spiritual insights from admiring the charming miniature Nativity scenes in churches. The amiable Belen images trigger sentiments of solidarity and prayer that Jesus’ birth may heal our broken humanity.

One of the activities I really enjoy during the Advent and Christmas seasons in Spain is seeing the wonderful miniature Nativity scene in churches. They are known as ‘Belen,’ as it is commonly called in the Philippines, my native country.

A typical Nativity scene consists of mini-statues of Mary, Joseph, and the Child Jesus, together with an angel, shepherds, the three kings, and a few animals. The Nativity scene in Spain are considered one of the oldest Christmas traditions. They are quite unique, spectacular, and mesmerizing. They have more figures of people, houses, animals, nature, and other items than in other countries.

With their elaborate and abundant details, they usually occupy a space of several square meters in churches, official buildings (like town halls), or commercial premises where the public can visit and see their beauty.

Aside from the main characters of the Nativity scene, they feature other people such as farmers, children, vendors, and villagers that depict the scene of the daily life of people. The stable where the Child Jesus is laid is surrounded by many different ruins of houses and buildings, walls, roads, farms, churches, animals, hills, rivers, artesian wells, bridges, stones, and the like.

There are also common structures such as a cathedral, city hall, or old walls. Some Nativity scenes have added audio effects, like the sound of nature, and visual effects, like smoke and lighting. There is also a kind of Belen that showcases the life of Jesus through joyful mysteries of the Holy Rosary and other Gospel accounts.

One evening after I closed the door of our parish, I remained inside and sat in front of the Nativity scene. I looked at the various features of the Belen. I was deeply moved by its marvelous creativity and beauty. I felt a sense of peace and joy. I was drawn into my desire of living in an ideal world. I pondered life in a safe, happy, and healthy environment. I wondered why the Nativity scene is depicted as nice and beautiful.

Wasn’t Jesus born in an oppressive society? Many were living in poverty, isolation, discrimination, and violence. People were waiting for a Messiah that could free them from suffering. I realized how the Belen serves as a reminder of God’s magnificent gift to us. God came into the world to bring salvation and peace.

I was fascinated by ruins of walls and buildings and wreckage of houses in the Belen that looked realistic. I recalled the thousands of buildings damaged and destroyed because of the war between Ukraine and Russia. It is very alarming and tremendously sad how many civilians, families, and innocent children have died. Many lost their shelters and are still suffering because of this nonsense war.

The more I became present and engaged in the Nativity scene, the more I thought of many happenings around the world. Another thing that caught my attention was the miniature stream with real running water. I thought of thousands of migrants who died at sea on their way to Europe. Yet, there are still many who are risking their lives to cross the Mediterranean on flimsy boats to seek and find a better life.

Another clever feature in the Belen is the miniature bonfire which reminded me of several wildfires that occurred in Spain. While there were burning hills due to extremely high temperatures during summer, there were also devastating typhoons in the Philippines. In the last few decades, there have been more natural calamities each year.

Coincidentally, when I noticed a section in the Belen with many figurines of children and teenagers, I heard some people laughing outside our church. I went to the door, took a sneak peek, and saw a group of teenagers. There were about 15 to 18-year-old teens who were having a good time making Tiktok videos with their phones.

Unexpectedly, I recognized two teenagers in the group. They belonged to our Confirmation group. They rarely attended our twice-a-month Confirmation meetings and did not attend Sunday Masses.

As I watched them walking away, I thought of another crisis happening aside from war and migrant refugee crises. The church is dealing with the poor participation of youth in our parish community. We still strive to recuperate from the COVID pandemic. We don’t see many young people attending the Eucharist and other parish activities. It is a sad reality not only in Spain but in all of Europe.

It is difficult to animate the faithful and offer more services to them when young and able volunteers are not serving in the church. It was ironic that the Belen in our parish looks vibrant for it displays many small statues of different people, with youth and children. But our actual parish life is dealing with lukewarm young parishioners.

It breaks my heart to know that many people, especially the young, do not consider Jesus as a source of joy and peace in their lives. I wonder what brings them happiness or where they seek it. I am referring to the joy that is profound and lasting, not the temporal happiness they get from the number of likes in their Tiktok videos.

I hope the youth will seek and know Jesus in the manger, who became a peacemaker grounded in humility, poverty, and self-denial. Jesus chose poverty and not power. He is a leader who shows mercy to all, but especially those who are in greatest need.

Moreover, many youths lack the ability to discern through the lens of their faith. The impact of rapid technological changes tends to equip them for multitasking and short-term mindsets but limits their capacity to make prudent and wise decisions. Just like the conditions of ruins of walls and buildings that are weak and unstable in the Nativity scene, it is disturbing that there are many youths with frail faith.

Some of them suffer from mental illness and commit suicide. Amid an aging world, Jesus has come to bring healing, rebuild our broken world, and restore our lives. Jesus comforts those who mourn. He wants to fulfill what we most deeply and truly want for ourselves.

The figurines of diverse people in the Nativity scene depict a sense of the communion of people waiting for the birth of the Child Jesus. They carry out their profession, with their potential and abilities, to serve others. But God shows us the greatest act of communion. God became human.

Jesus Is The Source Of Joy

May the youth open themselves to the mystery and truth of the Incarnation by seeking and fulfilling their chosen vocation. Through the meekness of the Child Jesus, may they also realize ways in which they can give themselves to others most fully and meaningfully.

As we celebrate the Christmas season this year, let us take a spiritual journey with our friends, family, or colleagues. Let us awaken our God-given senses and use our sacred imagination when we glance at Christmas decorations in our community, especially in our home and at our church. The Christmas signs and symbols around us are inviting us to rejoice with grateful hearts.

We are called to celebrate the true meaning of Jesus’ birth by becoming agents of change in our society.  We must be aware of the social problems in the world. Furthermore, we are urged to do our share in making a peaceful society like the one depicted in the Nativity scene.

Like the journey of the three wise men looking for the Child Jesus, let us also move closer to God’s people, especially to those who are suffering, the outcasts, and the neglected.

Jesus is the source of our rejoicing. As we look for the mini statue of the Child Jesus in the Nativity scene, may we also open and offer our hearts to Jesus to be the manger that brings indescribable joy and life-giving hope to everyone. We can only enjoy God’s gift to us when we share it with others with gratitude and humility.

If we truly want to experience Christmas grace, let us find Jesus in our hearts and in the hearts of all. Let us rejoice in His gift of love and respond to it creatively by serving our brothers and sisters.

Politics As An Act Of Love And Courage

In his latest Encyclical Letter, Pope Francis challenges us all to reclaim the nobility of the political act: to take responsibility as members of one human family for the well-being of all.