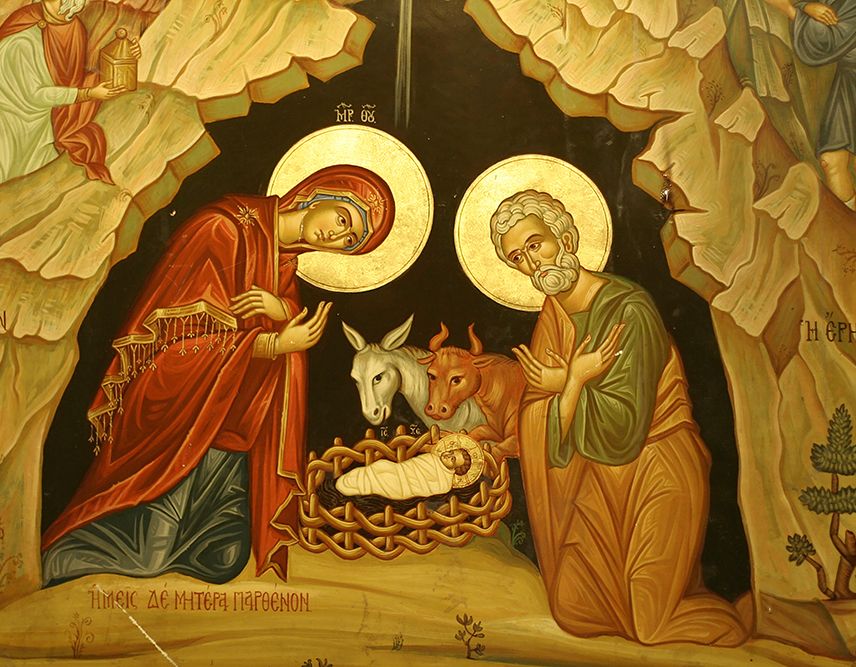 The Three Comings of Christ

Advent is the season when we prepare for the coming of Christ at Christmas. Christ comes in three ways. Christ did come in the past, Christ does come right now, and Christ will come in the future. Our Lord comes in history, mystery, and majesty.

You learn an awful lot about our faith when you teach religion to children. I recall one incident that happened to me when I was a parish priest where kids taught me something about Advent.

One day, I was teaching grade school at the parishes where I was assigned at the time. I was telling sixth graders about Advent as the time that we prepare for the coming of Christ at Christmas.

“But, Father Tim,” a young fellow said, “Jesus already came that first Christmas, in Bethlehem, in the stable. So how can we get ready for His coming now? He already came!” You know, that’s not a bad question either. I’d like to try my best to answer that question by talking about the three comings of Christ at Christmas–the triple “Advents” of Our Lord.

We believe that Christ comes in three ways. Yes, He has come already to Bethlehem on that first Christmas. This is the first coming of Our Lord, the one we’re most familiar with and celebrate every Christmas.

He also comes to us now, every day, in such mysterious ways, as in prayer, grace, word, and sacrament. These are other ways that Our Lord comes to us. The word for the celebration of the Lord’s birth, “Christmas”–literally, “Christ’s Mass”–hints at that coming as well. Then there is yet another coming. Christ will come at the end of time as judge of the living and the dead.

So there are three comings of Jesus. Christ did come in the past, Christ does come right now, and Christ will come in the future. Our Lord comes to us in history, mystery, and majesty. He came in history as the Holy Infant of Bethlehem. He comes to us now in mystery–in word, sacrament, grace, and mercy. He will come in majesty at the end of the world as judge of the living and the dead. Christ comes in history, mystery, and majesty.

His Coming In History

Our Lord Jesus Christ came in history. This is, of course, the coming that drove the dreams of the faithful people of Israel, who had waited so eagerly and so long for the coming of the Messiah. What we try to do as the Church in Advent, in a small way, is to consolidate those centuries of waiting into four short weeks. And we’re reminded that God takes His sweet old time in fulfilling His promises.

God may have promised a Savior in the Garden of Eden. But He was slow in following through on that sacred promise. So that’s why we hear words such as “yearning,” “waiting,” “hoping,” “watching,” “longing,” “looking,” and “preparing” throughout this holy season.

These words all become part of our Advent vocabulary at the sacred liturgy. But all that yearning, waiting, hoping, watching, longing, looking, and preparing–it was worth it when He finally did come, for as St. John the Evangelist records: “The Word became flesh and dwelt among us” (John 1:14). There is His coming in history.

Now, granted, there’s really not all that much we can do to prepare for that first coming of Christ –His coming in history–because as a matter of fact, it has already taken place. But we can, during this Season of Advent, assume the posture of the expectant people of Israel and admit that we have a very real need for a Savior. We sure do need a Savior!

Advent is an excellent time to prepare, to renew our faith that the baby whose birth we hail at Christmas is indeed the Savior of the world, the long-awaited Messiah–the One who can save us! Now, it might sound easy to make the admission that we need a Savior, but in reality, it’s tough because most of us are sort of proud and feel rather self-sufficient and independent–in other words, we feel we’re able to take care of ourselves. We hardly need a Savior.

Yet if we are really honest with ourselves, we admit that there are certain things in our life that we just can’t fix. I need help. I happen to need a Savior–and there is good news! We happen to have the best Savior ever, who was born in Bethlehem of Judea, in history, on that first Christmas Day.

What we actually mean by Christ’s coming in history is that at a specific time and place, God became Man and entered the human drama. This is called the Incarnation–that is, Our Lord’s coming in history. Advent can be a great time to recollect our utter dependence and need for God-made-Man, who has broken into the history of the world, to save us.

His Coming In Majesty

That was His coming in history. Let’s jump ahead to the third coming of Christ, His coming in majesty. I used to bring Holy Communion to a wonderful woman in the parish who was housebound because of frail health and advanced age. Her name was Rosemary.

On one Friday when I gave her Holy Communion, she made her thanksgiving afterward, and for a short while we chatted, as I like to do when making my Communion calls. “Father,” she said, “some pests came to the door earlier this week, thumping their Bibles, and they said to me: ‘Listen, ma’am, you better be ready because Christ is going to return soon! Christ is going to come back as the judge. You’d better be ready and you better be saved.’”

I asked Rosemary, “Well, what did you say to those fellows at the door?” “I said, ‘I’m a Catholic. I don’t believe any of that stuff.’” Uh-oh! It was time for a little catechism lesson for my friend Rosemary.

I said, “Rosemary, of course, we believe that the Lord is going to come again at the end of time. Don’t we say at every Mass, in the memorial acclamation, ‘Christ had died, Christ is risen, Christ will come again’? Don’t we say every Sunday as we profess our faith in the creed, ‘He will come again in glory to judge the living and the dead’ ”?

“Remember,” I said, “right after the Our Father at Mass, that the priest says ‘as we wait in joyful hope for the coming of our Savior, Jesus Christ,’ and that the priest prays in the preface right before the Sanctus at the liturgies of Advent, ‘Now we watch for the day . . . when Christ our Lord will come again in His glory.’ ”

I did have to admit to Rosemary that, unlike some other Christian believers, we Catholics quit a long time ago, trying to calculate just when Christ will come again–but we sure do believe that He will.

Christ will come again in glory–that is an essential part of our faith. That’s His coming in majesty. Advent is a great time to reflect on that, to remember it, and to prepare for it. Everything here in life, as beautiful and as wonderful as it is, is only a hint of what awaits us when Christ comes in majesty at the end of time. Nothing is permanent here, and we look forward to the day when Christ will come and usher in His everlasting reign.

Sub specie aeternitatis! This is an old classical Latin phrase to say that we view everything “under the aspect of eternity.” It is a way of looking at what I’m doing right now and asking:

How will this appear on the day when Christ returns in majesty to be the judge of the living and the dead?

Compelled to Leave their Homes

Thousands of families and young women and men from Central America are compelled to leave their homes and risk their lives undertaking dangerous journeys, only to search for a safe place to live. But…

The Philippines’ distinctly “pro-life” culture is facing challenges from ideologies and governments imposing contraception, abortion, euthanasia and the execution of offenders. And yet, groups of…