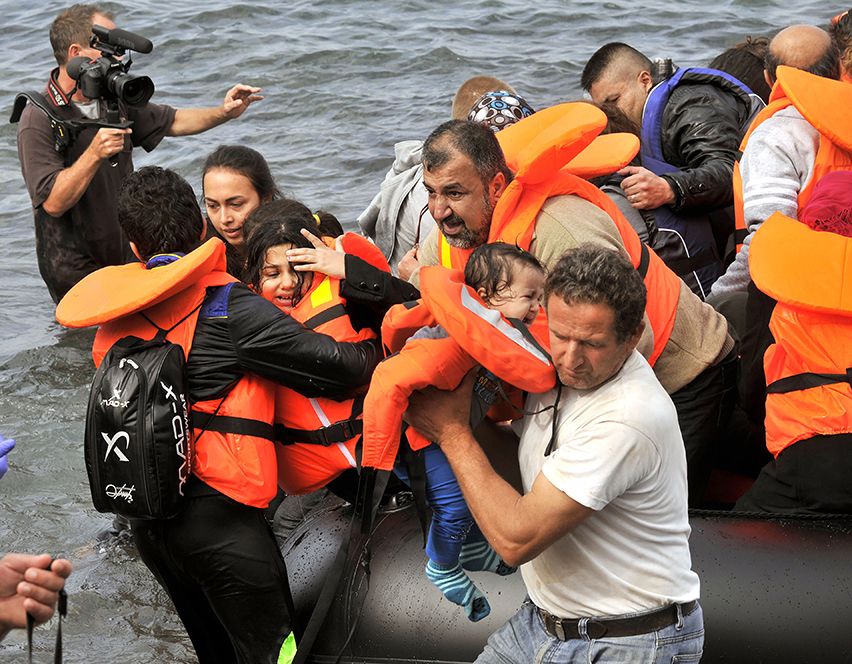 Why Many Christians are Demonizing Refugees

As we celebrate the birth of our Saviour to a family that had nowhere to stay, and had to flee an oppressive regime abroad, it is a good time to wonder why many of those who proudly call themselves Christians are demonizing refugees today.

Christmas comes in many shapes and sizes. In much of the Northern Hemisphere, it is celebrated in the snow, whereas Australians tend to go to the beach. Western Christians celebrate it on 25 December, and so do most Eastern Christians, including the Orthodox, except that since they use a different calendar, their 25 December lands on “our” 7 January.

Then again, in Spain, the bigger feast day is Epiphany, on 6 January. The British and Americans eat turkey; the Portuguese eat octopus and codfish–although you don’t need to wait for a special festivity to see Portuguese eating codfish.

Ethiopian Christians call Christmas “Genna,” the day when they break a 40-day fast of meat and dairy products and play a local form of field hockey.

In Asia, the Philippines are a treasure trove of Christmas traditions, from the drummer boys of Batanes who wake people for dawn mass, to the giant lanterns of Pampanga and Baguio, and not forgetting the Maytinis Festival in Cavite, where the Christmas story is recreated in the streets.

Despite all the differences and variations, one thing is constant: the Christmas story itself– a young pregnant lady and her husband desperately search for a place to stay, and then, after their son is born in a stable, have to flee an oppressive regime to a foreign land, as refugees.

Given that this is the cornerstone of Christmas, one of the most important dates in the Christian calendar, one would think that Christians everywhere would automatically sympathize with the plight of those who, in our day and age, also have to flee oppressive regimes and live, often in desperate conditions as well, as refugees, far from their homes, family, and friends.

And one would be right of course. Official Catholic teaching, with roots in the biblical tradition, highlights the importance of welcoming strangers, giving shelter to the homeless, providing the sick with care, clothing the naked, and feeding the hungry.

The Plight Of Refugees

It is no accident that Pope Francis has insistently highlighted the plight of refugees and migrants. It may have taken some time for Francis to grasp the dimension of the refugee crisis in Europe when he was elected Pope because this is not something he would have had to deal with in his native Argentina.

His first mention of refugees–according to a search of the Vatican website–occurred in May 2013, during an address to the Pontifical Council for the Pastoral Care of Migrants and Itinerant People, only two months after his election.

“The Church is a mother and her motherly attention is expressed with special tenderness and closeness to those who are obliged to flee their own country and exist between rootlessness and integration. This tension destroys people. Christian compassion is expressed first of all in the commitment to obtain knowledge of the events that force people to leave their homeland, and, where necessary, to give voice to those who cannot manage to make their cry of distress and oppression heard”, the Pope said, adding, “they are human people, I stress this, who are appealing for solidarity and assistance, who need urgent action but also and above all understanding and kindness. God is good, let us imitate God. Their condition cannot leave us indifferent.”

“Moreover, as Church, we should remember that in tending the wounds of refugees, evacuees, and the victims of trafficking, we are putting into practice the commandment of love that Jesus bequeathed to us when he identified with the foreigner, with those who are suffering, with all the innocent victims of violence and exploitation.”

Francis also made sure that his first trip as Pope was to Lampedusa, the Italian island at which thousands of refugees were arriving every day to try and find safety and a better life in Europe. The Pope often speaks of the tragedy of the Mediterranean having been turned into a cemetery, where thousands of migrants lost their lives.

In 2016, Francis took things one step further, and, after a visit to the island of Lesbos, where thousands of refugees and migrants lived in precarious conditions, he brought three families, 12 people in all, back to Rome with him.

However, the Pope’s words and actions, and the constant teaching of the Catholic Church, have stood in stark contrast with the words of many members of society and of politicians who normally identify as Catholics and, in fact, make much of their Christian identity. How is this possible?

The trend began several years ago with figures such as Berlusconi and Viktor Orban. The former promised to deport hundreds of thousands of illegal immigrants, but jokingly said he would make exceptions for beautiful girls, and the latter has proudly proclaimed that Hungary’s policy is to accept zero migrants. Images of fences being erected on Hungary’s borders became a symbol of hostile policies towards refugees in many parts of Europe.

Of course, there are always two sides to every story. Both Hungarians and Italians say that they are on the frontlines of the problem and that as EU countries they have a responsibility to safeguard the borders of Europe. And it is true that while the Church advocates for the humane treatment of refugees and migrants, it realizes that a simple “open borders” policy is both naïve and unpractical.

But, unfortunately, the hostile attitude to migrants is not rooted only in a sensible preoccupation with the practical and logistical effects of receiving more people than one can handle.

The rhetoric employed is very often one of suspicion and fear of people of different cultures, religions, and traditions. This is most worrying when political leaders claim that they are against migration because it threatens the Christian fabric of Europe and other western countries.

They fail to see any contradiction in the fact that they are defending leaving people to suffer and even die in terrible conditions, in order to preserve a culture based on the belief that “whatever you do unto the littlest of them, you do unto me.”

There is a case to be made for the need to save Christian Europe, but it goes in the other direction. A Christian Europe that will sacrifice the desperate, the hungry, and the persecuted is perhaps a Europe that has forgotten what Christianity is all about and is, for sure, a Europe that has lost faith in the ability of its beliefs to overcome obstacles and to move and convert the hearts of those who come into contact with it.

A Europe where Christianity is in the architecture, in the culture, and in the vocabulary, but not in people’s hearts and souls.

Unfortunately, it seems that in recent years the trend has only worsened. Catholic voters in many European and Western countries now find that the political parties that claim to defend their values and stand for preserving Christian culture are often led by people who openly hold beliefs deeply at odds with Catholic social teaching, or who lead personal lives that would make most Christians shudder. Donald Trump and Boris Johnson are two names that spring to mind.

True, many of these leaders, such as recently elected Giorgia Meloni, in Italy, do stand against issues such as the transgender movement or the abortion lobby, but this is undercut by their anti-migrant stance. Unfortunately, in an increasingly polarised world, parties that follow the more traditional Christian Democrat values have been swallowed up by the rising “new right” that seems less inclined to respect either Christianity or democracy.

It should come as no surprise that, for many of these new political movements and figures, the Pope has become an unwelcome figure also. With his constant reminders that Christians have an obligation to protect and support the marginalized, rather than demonize them and see them as threats and enemies, he finds himself denounced.

This criticism has been coming not only from politicians but even from sectors inside the Church that apparently see no problem in aligning with political trends against the very successor of St. Peter. With no end in sight to wars and instability in the Near East and growing unrest in Eastern Europe, the refugee and migrant issue is not going to go away anytime soon.

The Pope, and his successors, will no doubt continue to hold the Christian line in this respect, and it remains to be seen if the “new right” will manage to walk the tightrope of calling itself Christian and promoting intolerance, or if it will simply jettison its Christian label altogether and bow down before the idols of safety, cultural uniformity and racial purity. We’ve been down that road before, and it didn’t end well.