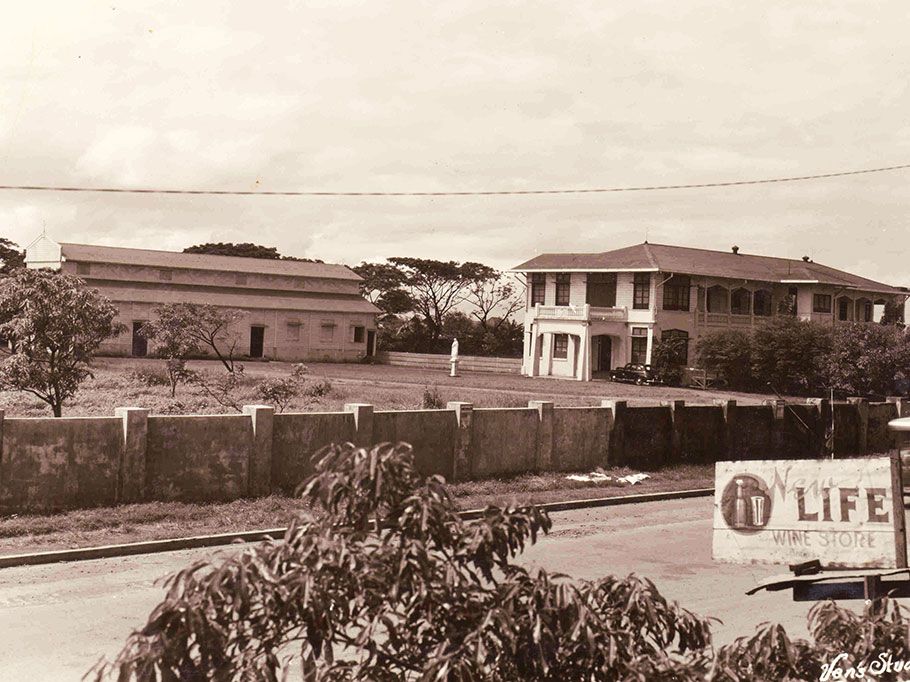 Baclaran Church went through several stages of growth in becoming home to the biggest shrine in the world dedicated to Our Mother of Perpetual Help. Today, 150,000 devotees flock to the National Shrine every week seeking God’s mercy through the Blessed Mother.

A few years later in June 1913, the Redemptorists arrived in Manila to take over the parish of Malate from the Columban priests. It was in Malate Church, which in the past was a famous pilgrimage site for the Virgin of Remedies, that the devotion to Our Mother of Perpetual Help had its humble beginnings in Luzon.

From Malate, the Redemptorists soon resettled on a three hectare property in Baclaran. According to a story, this piece of land in Baclaran had been bequeathed “to the Blessed Virgin” by a certain lady only remembered as Anastacia.

Mission Station
In 1929, Baclaran was an obscure rural fishing village of Manila, and from the very beginning, the early Redemptorists conceived of it as a mission station from where they could more easily travel to distant barrios to hold missions.

The small wooden chapel was only meant to cater to the local community around the convent. It fitted in with the ideal preconception of a rural mission church that the pioneer Redemptorists favored. Built rather small with only wooden frames, the shrine and monastery suited the predominantly fishing village landscape that Baclaran exemplified. Until 1947 most attendees of masses at Baclaran were the local fisher folk.

The perpetual novena to Our Mother of Perpetual Help has its roots in Iloilo where the Redemptorists began the devotion on May 13, 1946. This was soon followed by the Redemptorists in Cebu on September 15, 1946 and in Lipa on June 13, 1947. The first perpetual novena began in Baclaran on Wednesday, June 23, 1948 led by Fr. Joe English, CSsR, with just seventy people present.

It must be noted that there is nothing special about the choice of Wednesday. A cursory look at novena schedules shows that the perpetual novena devotions were held on different days in other Redemptorist churches in the country.

It was initially held every Monday in Iloilo and every Sunday in Cebu. Because of the success of the perpetual novena in Baclaran, however, these communities synchronized their novena sessions for greater uniformity throughout the country. Catholic parishes in and around Manila likewise held novena sessions on Wednesdays.

It came to a point when the rapidly increasing crowd could no longer be accommodated in the eight sessions held in the small chapel every Wednesday. An expansion of the chapel was completed in 1949 to accommodate 600 devotees at a time. However, this expansion still failed to provide enough space for the increasing number of devotees.

A major expansion of the church began in 1952. The people were asked to contribute ten centavos a week towards the construction work and as a result the new church was built around the old existing church in six years.

In 1958, the new church seating capacity of 2,000 with a total capacity of more than 10,000 was completed and dedicated. Earlier that same year, the Catholic Bishops’ Conference of the Philippines elevated the status of the church to that of a National Shrine in recognition of the devotion to Our Mother of Perpetual Help which had become significantly popular nationwide. The Baclaran Church became the spiritual center of this devotion nationwide.

The rapid rise of the number of devotees in Baclaran could in part be attributed to an innocent account of an altar boy simply discovering roses which had been thrown out but sensationally reported in the newspapers as “roses that had fallen in Baclaran” – a striking association to the then phenomenal shower of roses in Lipa City’s Carmelite Monastery which was all over the news.

Reasons for the Rapid Rise
According to Karl Gaspar’s essay “Embracing the Mother’s Perpetual Compassion,” there are two bigger factors in the fast increase of devotees – time and place. “In 1948, the people of Metro Manila were still recovering from the massive destruction of the Second World War. New migrants were coming in from the provinces seeking new opportunities that came with the peace after the war. Families were being reconnected as others were being separated. Life was not easy for the great majority of the people in the 1940s and 1950s. They had their share of displacements, anxiety, instability, poverty. It was a period that would draw people to devotions such as OMPH (Our Mother of Perpetual Help).”

Another possible reason can be traced in the parish missions done by Redemptorist missionaries, particularly in far-flung places where the pastoral and spiritual needs of the faithful were hardly given attention.  In those places, devotion to Our Mother of Perpetual  Help was an integral part of their mission work.

The meaning of the parts of the icon of the Blessed Mother was not only explained by the missionaries to the people; they were also given perpetual novena booklets that would sustain both the memories of the mission as well as the ongoing growth in faith through the devotional novena. The impact of the mission encounters with the people in those distant places as well as the native maternal affinity of the common people could be considered as co-influential factors in the popularity and spread of the devotion to Our Mother of Perpetual Help.

Revision of the Devotion
The 1948 perpetual novena devotion format used in Baclaran Church was generally focused on the personal sanctification and holiness of the devotees with most of the prayers focused on spiritual needs. This was revised in 1973, after the conclusion of Vatican II, with prayers and petitions for social justice, human dignity, the need to pray and be concerned for the other, service towards the community and prayers for peace being included.

In 2017, the novena was again revised to attune it to recent theological insights regarding the role of the Blessed Mother in God’s plan of salvation, to incorporate an inclusive language into the novena, and to adapt it to new issues and challenges confronting the world today.

Hence the devotion has been shown to adapt to changing circumstances and has continued to provide a platform for expressing a broad spectrum of needs. This is apparent in the expansion of the prayers to emphasize the social dimension where one does not pray only for oneself but also for the needs and concerns of others. Therefore in addition to the devotion guiding people towards the life that they desire to live and to map out the resources they need to overcome the obstacles they will perhaps encounter along the way, the devotion also allows the devotees to reaffirm their bonds with each other in a meaningful way.

After 150 years of the entrustment of the icon of Our Mother of Perpetual Help to the Redemptorists, the perpetual novena devotions in Baclaran Church still attract a vast number of people who line up to touch and pray before the icon.

In a way, the icon of Our Mother of Perpetual Help has become part of the faith and life journey of the Filipino. The Shrine never closes. It is open twenty four hours all the year round accommodating people from all walks of life in the megacity of Manila.  Moreover, testimonies of thousands of devotees of petitions granted them through the intercession of the Blessed Mother keep filling the thanksgiving letter boxes around the Shrine. In all the novenas on Wednesdays, a letter of thanksgiving is read to show to the other devotees the power of the prayer of Our Mother to the real Perpetual Help, her Son and Savior, Jesus Christ.

Global warming is already producing destructive effects that disproportionately afflict poor people around the world, threatening their very lives. However, we must also keep in mind that, as the…

We tend to misinterpret Jesus and His message because we have only a scant knowledge of the social and political environment of Palestine at that time. Let us have a look at the social reality at the…